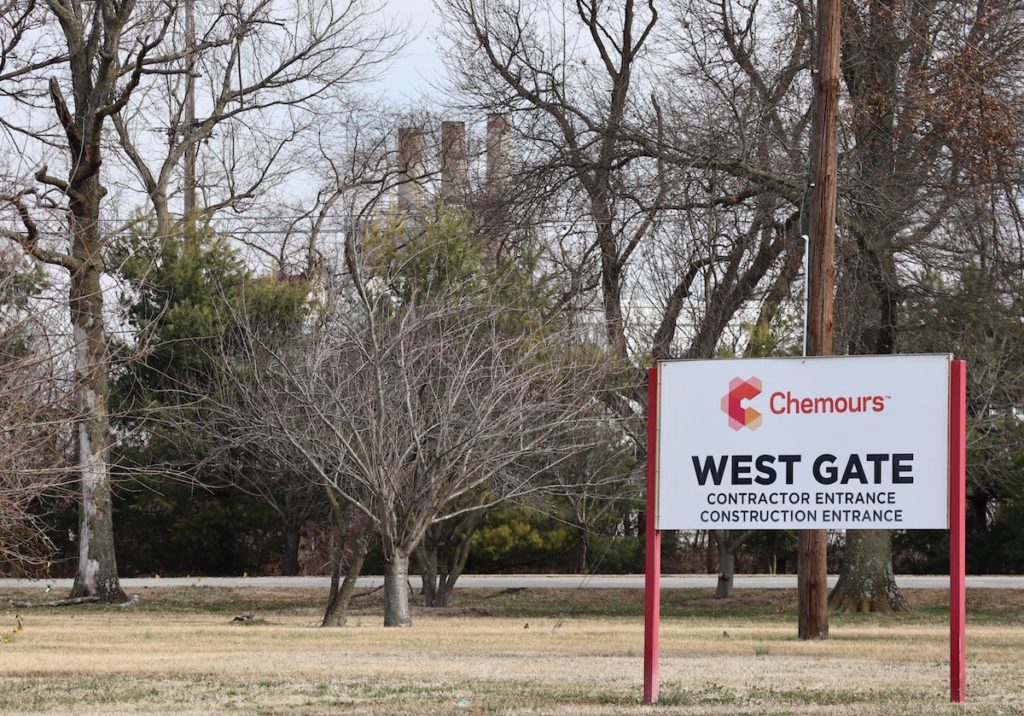 The emissions that Louisville's Chemours plant produces do more damage to the climate than all of the passenger vehicles and light-duty trucks registered in Jefferson County. | Photo by James Bruggers, Inside Climate News

The chemical giant Chemours, moving to curtail emissions of a climate super-pollutant from its manufacturing facility here, has asked Louisville officials to issue a permit for new equipment that could result in the release of chloroform and other hazardous air pollutants as part of the abatement process.

The company plans to capture the climate super-pollutant, hydrofluorocarbon-23 (HFC-23), and transport the gas to a Chemours plant in West Virginia for destruction. HFC-23 is a byproduct resulting from the production of hydrochlorofluorocarbon-22, a chemical ingredient in everything from Teflon to lubricants used on the International Space Station.

As part of the process to capture HFC-23, about 1,600 pounds a year of chloroform, hydrochloric acid, chlorine and hydrogen fluoride, all hazardous air pollutants, could be emitted into neighborhoods around its Louisville Works.

While not a local air pollutant, HFC-23 is one of the most potent greenhouse gases warming the planet. The chemical byproduct is 14,600 times more warming of the atmosphere than carbon dioxide, the primary driver of climate change.

Chemours and Louisville officials say the net effect of the abatement project will be a major reduction in greenhouse gases blamed for heating the planet, and a plant-wide reduction in hazardous air contaminants—even though the proposed construction permit shows a chloroform tank and other new equipment could result in the release of those air pollutants. A 30-day comment period on the proposed permit, first reported by WFPL News, ends Dec. 14.

Environmental advocates say any aspect of the project that adds hazardous air pollutants within the city’s Rubbertown industrial district threatens the surrounding community, which has had a history of high levels of toxic air pollution and environmental justice battles.

Wilma Subra, a chemist who has long consulted with communities in the country near chemical and industrial hazards, including the Rubbertown area, said that it would be beneficial for Louisville officials to require that Chemours put controls on the new equipment so no new air pollutants are released.

Any potential extra emissions of chloroform and volatile organic compounds from the new equipment “will have acute impacts including respiratory problems, skin rashes, headaches, nausea, vomiting and will also have cumulative impacts after 30 years of exposure,” Subra said.

The increase could also “add to the burden for chronic impacts such as cancer and leukemia” experienced by people who live in the Rubbertown area, she said.

Rachael Hamilton, director of the Louisville Metro Air Pollution Control District, said the additional 1,600 pounds of emissions from HFC23 collection equipment that are written into the proposed construction permit only tell part of the story.

The permit only covers part of the pollution control work that the company plans to undertake as it collects the HFC-23, city officials said. After adding up all Chemours’ new emissions mitigations, they expect to see plant-wide reductions of chloroform and the other hazardous air pollutants.

After Chemours completes its Louisville project, the plant will continue to comply with the city’s Strategic Toxic Air Reduction Program, even if the new equipment emits some additional pollutants, she said. The program was adopted in 2005 to reduce cancer and other health risks from industrial plants to low levels and has helped to sharply reducetoxic air emissions in the city.

“There will not be an increase in emissions” at the plant, said company spokesman Thom Sueta.

Greenhouse Gas Emissions Equal to All Cars and Trucks in Louisville

Chemours is responding to pressure by the Biden administration to reduce emissions of HFC-23. The company has been emitting enough HFC-23 in Louisville into the atmosphere each year to equal the climate pollution from all the cars and light-duty trucks in the city, the state’s largest.

Company officials have said they already collect and move by rail a significant portion of the HFC-23 from Louisville to the Chemours Washington Works plant in West Virginia for destruction.

The EPA is requiring Chemours to eliminate 99.9 percent of its emissions of the climate super-pollutant as part of a phase down of the production and importation of HFCs by 85 percent over the next 15 years, and their replacement by safer alternatives. The federal government’s action is part of a global effort to avoid up to 0.5 degrees Celsius of super-pollutant-driven global warming by 2100.

But in Louisville, where concerns about environmental justice have made headlines for decades, and where city air pollution officials in 2005 adopted one of the nation’s strictest toxic air reduction programs, any potential industrial pollution increases are likely to face scrutiny.

‘We Clearly Note an Increase’

Air pollution district officials said that only part of the company’s HFC-23 plans requires them to issue a permit, which would authorize the installation of a pressurized chloroform feed tank, an HFC-23 recovery tower and equipment to handle hydrochloric acid.

In the draft permit, “we clearly note an increase,” said Matt King, with APCD, referring to a document that shows added emissions of about 1,600 pounds of chloroform and other hazardous air pollutants, including hydrochloric acid, chlorine and hydrogen fluoride, from the new collection equipment.

Subra said the air district should require control of those new emissions. “They can put on control technology that will filter it out or react with it before it is allowed to be released into the air,” she said.

“If it were necessary to do so, we would require that,” Hamlton countered. “There will be a net reduction in emissions,” she said.

Inside Climate News is a nonprofit, independent news organization that covers climate, energy and the environment. Sign up for the ICN newsletter here.