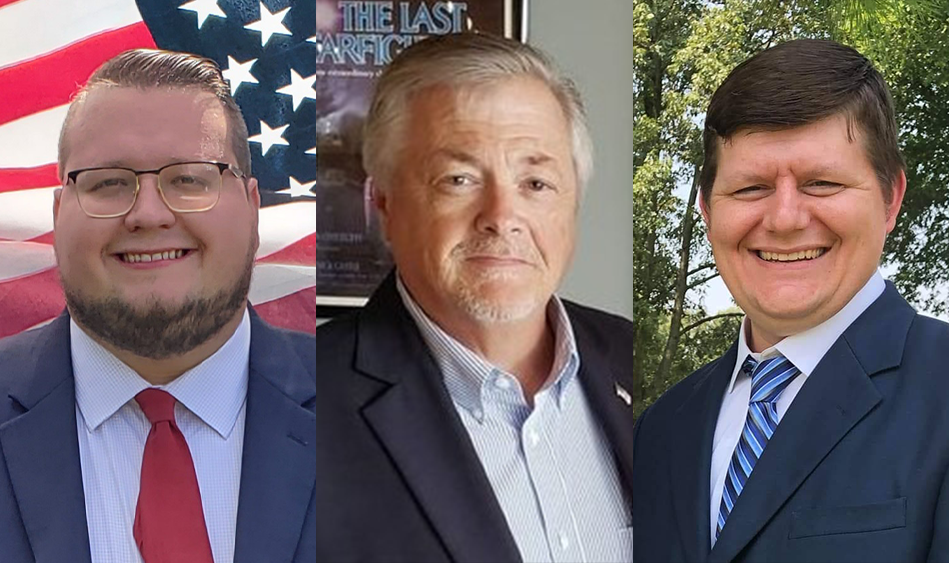 This story has been updated with a comment from Jacob Clark.

The past two years have brought out an ugly side of American and Kentucky politics.

Armed protesters took to the Kentucky Capitol multiple times to rail against vaccines and masks.  Trump supporters used social media to cheer on the former president’s attempts to subvert the election results.

It shouldn’t be a surprise that representatives from this contingent are running for office.

These were politically-involved men who Beshear compared to the violent insurrectionists who overtook the U.S. Capitol on Jan. 6.

They are Tony Wheatley, Jacob Clark and Andrew Cooperrider — all running for seats in the state General Assembly.

Wheatley has been accused of organizing two of the armed protests at the Kentucky Capitol. Clark posted “A warning for Governor Andy Beshear” video on his Facebook, saying that “God may strike” Beshear “down” for his attempts to stop churchgoers from attending in-person services at the height of the pandemic. And Cooperrider’s coffee shop responded to the Jan. 6 attack on social media by saying, “you reap what you sow.”

LEO emailed all three to ask them about their social media posts and protest involvement. As of press time, only Jacob Clark had responded: “Tyrannical lunatic Andy Beshear thinks he is God,” he said in an email. “He should be prosecuted on earth and will submit to the judgement of the Lord in heaven. Andy Beshear and the corporate press that serve as the mouthpiece of his regime are the enemy of the people.”

All of the candidates are running against more establishment Republican candidates.

They filed their petition to impeach Beshear back in January. It was unsuccessful.

At the time, Beshear raised concerns about Clark’s and Wheatley’s past social media and protest actions.

“This is exactly what we saw in D.C.,” Beshear said. “These are the people that are out there trying to undermine our democracy in any way that they can.”

The TV station Lex 18 reported that Wheatley told them that he helped organize the May 2020 protest at which an effigy of Beshear was hanged outside of the Kentucky Governor’s Mansion. Wheatley, who is the founder of a nonprofit called Constitutional Kentucky, has since denied that he was an organizer. He said that he emceed the event. Beshear also accused Wheatley of organizing a rally at which an armed participant was spotted carrying zip ties “just in case.”

Wheatley told Lex 18, “I do not…ever want to see someone talk about hanging or threatening anybody,” he said. “It’s not how our society works.”

But, his co-filer Clark was accused of threatening the governor. Beshear cited Clark’s Facebook video in which he warned that the governor might be struck down by God. In the video, a gun was seen in the background.

Clark responded to Beshear by posting on Facebook saying, “If you listen to the video I make sure to clarify that I do not want any harm to come to him. I even talk about praying for him in the last minute of the video.”

He continued on to say that he “always” has a firearm next to his bed.

Clark’s campaign page has shared another post in the past advocating for violence against politicians. It read, “Any politician who supports any part of the Patriot Act is a traitor and a tyrant, and should be hanged. Will you vote for a traitor again?”

Wheatley has his own set of questionable Facebook posts.

After the attack on the Capitol, he posted, “Mike Pence failed to stand up against the establishment” and “We had people in DC today. They are safe.”

In the comments, Wheatley clarified what his “people” did, while also spreading a conspiracy theory that anti-fascists were behind the Capitol attack, “There was a hand full of patriots and antifa that entered to capitol. We had people on or near the steps but they did not enter the building. Many III% helped them get out of the area,” he wrote.

Cooperrider’s coffee shop Facebook page also addressed the attack, saying “You can’t keep people locked up in their house. You can’t keep ignoring the needs of the citizenry. You can’t keep antagonizing the people.Then act surprised when they rise up and it boils over.”