‘Queer As All Get Out: 10 People Who’ve Inspired Me’
Created by Shelby Criswell
Review by Felix Whetsel, The Great Escape

It’s unfortunate that you’ll sometimes hear people claim that certain LGBTQ+ identities are ‘trends’ or ‘fads’ or what have you. In reality, there’s a long history of queer people with those identities who were either simply trying to live their lives, or make strides in the fight for queer rights. While in recent years more and more of these figures are getting their names returned to them, there are still even more who have been lost to history (sometimes on purpose). Shelby Criswell’s book “Queer As All Get Out” looks to right those wrongs and bring some lesser-known LGBTQ+ individuals from history into the spotlight.

I’m not gonna lie: I started reading this while standing behind the counter at work and, as a queer trans dude, got a little misty eyed in between customers. “Queer As All Get Out” is not only an exploration of LGBTQ+ history, it’s also an exploration of the author’s own identity and how their research impacted their journey to self acceptance. In between the stories of figures such as We’wha, Ifti Nasim, and Dr. Magnus Hirschfeld, Criswell discusses what effect trans- and homophobia had on their coming out, but also the powerful effects of found family and community.

There’s a line at the end, taken from the Gay and Lesbian Memory in Action archive, that states “Without queer history, there is no queer pride.” It’s an incredibly powerful sentiment, and this book is a great stepping stone into our queer history.

With the use of dark magic, the sun has been calmed down to the point that vampires can walk the earth by day.  I’m sure the old Buffy would point out the pun there, but this is an alternate universe, and this is an older, if not wiser Buffy.  For self preservation, vampires and humans have entered into a treaty making the killing of either a crime.  But, haters gonna hate, and Buffy Summers is not happy about this arrangement.  She knows their nature, and she doesn’t trust that vampires will “do no harm” to their human neighbors. Her friends are mostly gone but we do get to see a few of the regulars. 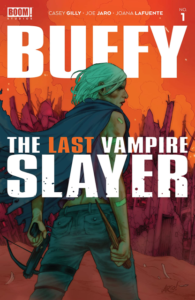 A mystery runs through the story, as well, involving Buffy’s seeming move to becoming  immortal, even as her powers are diminishing in other ways. Vampires seem to be able to sense her presence even without her revealing herself, and just as she doesn’t trust them, they don’t trust her, nor have they forgotten what she is, or was.  If that’s not enough, she comes across a young girl with interesting parentage (no spoilers here!) who seems to have many of the same abilities that made Buffy a slayer, illegal or not.

This is a great read for Buffy fans.  It seems the more things change, the more they stay the same.  Hopefully issue No. 2 will give us some answers and more time with everyone’s favorite slayer.