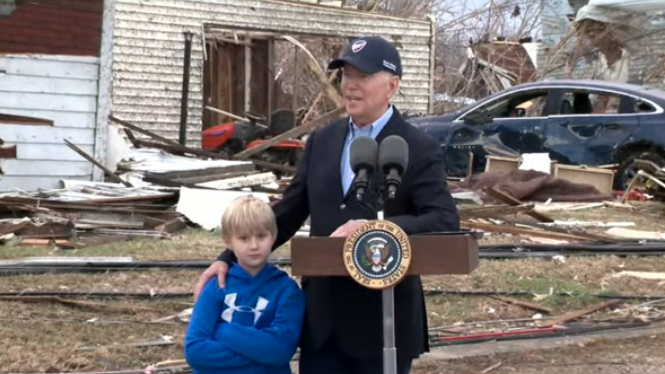 President Joe Biden spent the afternoon in Western Kentucky on Wednesday, surveying the damage of last Friday’s deadly tornadoes and laying out more plans for ongoing federal support, including that the U.S. government promises to cover 100% of the disaster relief costs for the first 30 days.

Biden — who approved Gov. Andy Beshear’s request for an emergency disaster declaration over the weekend — landed in Kentucky around 11 a.m. on Wednesday, and spent the afternoon talking with citizens of heavily-affected communities, including Mayfield and Dawson Springs.

“Don’t hesitate to ask for anything,” Biden said, shortly after landing in Kentucky.

During an early press conference held at the Mayfield Graves County Airport, the president said he was shocked when flying over the areas most impacted by the devastating tornadoes, which left at least 75 people dead and caused significant damage, with some areas estimated to take years to rebuild.

Secretary Mayorkas urged people in need to use www.disasterassistance.gov, which he referred to as a “one-stop shop.” Beshear stressed that point as well, saying that 1,800 families have already used the service.

Recovery in Kentucky is going to take a long time, but we’ll be there every step of the way. FEMA has opened Disaster Recovery Centers and has teams on the ground.

Federal Emergency Management Agency Administrator Criswell spoke about the mobile units that FEMA has set up in Mayfield (Mayfield Plaza, 1102 Paris Road) and Dawson Springs (First Baptist Church, 960 Industrial Road) that are helping people register for aid. She also said that disaster survivor assistance teams have been walking about the affected communities with FEMA shirts and iPads, helping people register for assistance and find other needed resources.

“It’s been just five days since we’ve seen the devastating impacts of these tornadoes, and what I’ve seen already is that the recovery has already begun,” Criswell said. “As you’ve already heard, how the communities have come together to help each other out and begin this recovery process, but know this: You have our commitment, the commitment of the federal government to be here with you, as you continue to go through this road to recovery.”

During a speech at the president’s final stop for the day in Dawson Springs, Gov. Beshear said that the federal government has provided everything the state has asked for, including covering the relief costs for the first 30 days — an ask the governor didn’t think would get approved.

“I am so thankful for the full, unwavering support of our federal delegation,” Beshear said. “I am so thankful for the president to say ‘yes’ to every ask we’ve made, and he’s going to have some news about another ask that I made, one that I thought there was no way that we could get a ‘yes’ to. But, it’s going to mean the federal government isn’t just here, isn’t just doing things we’ve never seen before, but is fully behind every single family that has suffered any loss.”

After taking the mic and confirming that the federal government would cover the costs of the first month, Biden also spoke about the substantial support needed when dealing with this sort of loss and the necessity of communication with the people in need.

At the Dawson Springs stop, which took place in a neighborhood where several families lost their homes — the damage visible in the background — Beshear shared his personal connection to the area, and encouraged Kentuckians to continue to help each other out.

“This town is part of who I am,” the governor said. “I spent Christmas’ on a porch that, thank God, is still standing, not too far from here. My granddad would put me on his tractor and drive me around town, which is a pretty big deal for a little kiddo. I buried my kin right here in town, just down the road. To me, this was always a safe place. Bad things did not happen here, until Saturday. If you look around here, or Mayfield, and in Muhlenberg County, and number of other towns, you might think that we are broken. But. We. Are. Not. In Kentucky, we are good people. We love one another. And we lean on one another. We open our homes to those in need, not just today, but everyday. And we will repair our homes, our businesses and we will repair our lives — we will do all of that together.”