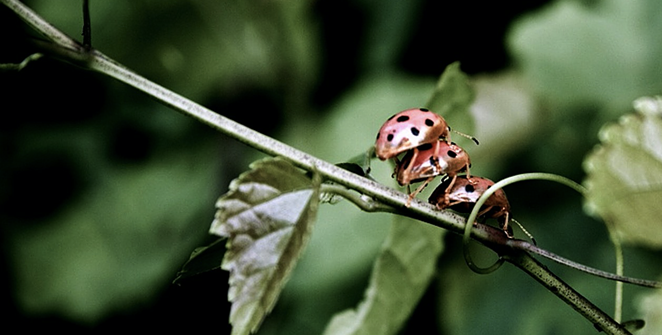 Humans apparently aren't the only ones who enjoy threesomes.Flickr / Bùi Linh Ngân

Further, the survey shows that a strong majority of the app’s users think that bringing in outside partners has strengthened their marriages. A whopping 75.23% wholly support a ménage à trois every now and again, according to the data.

Titillating news, to be sure, but a San Antonio-based sexologist says we ought to consider the source.

“Let’s just state the obvious, that this data is coming from an app whose business is threesomes. The people this app surveyed already subscribe to the app, and are already exploring the lifestyle,” sexologist, body image coach and yoga instructor Angela Michelle told the Current.

“What I think is happening is that, in our culture, talking about sex and conscious sexual exploration is taboo,” added Michelle, who is certified by the American College of Sexologists International to offer sex coaching to individuals and couples. “So, any time a conversation is started about introducing a third party into a relationship, people don’t also talk about the very deep and vulnerable communication that goes into creating a space for that to be successful.”

The 3Fun app, which was first made available in 2016, purports to have hundreds of thousands of users, including many in SA. In both 2019 and 2020, the Alamo City ranked in the app’s top 10 cities for active users.

Yes, even during a worldwide pandemic.

So, does sex coach Michelle think threesomes are a bad idea? Not necessarily.

“I don’t think every couple is right for that lifestyle, but there are support groups and communities that exist that can help couples decide if that’s something they want to dive into,” Michelle said. “These groups get together and talk about things like jealousy, which often crops up in non-monogamous relationships.”

She added: “For this sort of arrangement to be truly beneficial to a relationship, both parties have to be able to feel joy for their partner in what they’re experiencing. If we’re able to be genuinely happy for our partner because they’re enjoying something — even if it’s not with us — then we’re going to find that that contributes to our joy. It can definitely be a good thing, for some couples.”

This story was originally published in LEO’s sister publication, the San Antonio Current. Read the rest of their work here.