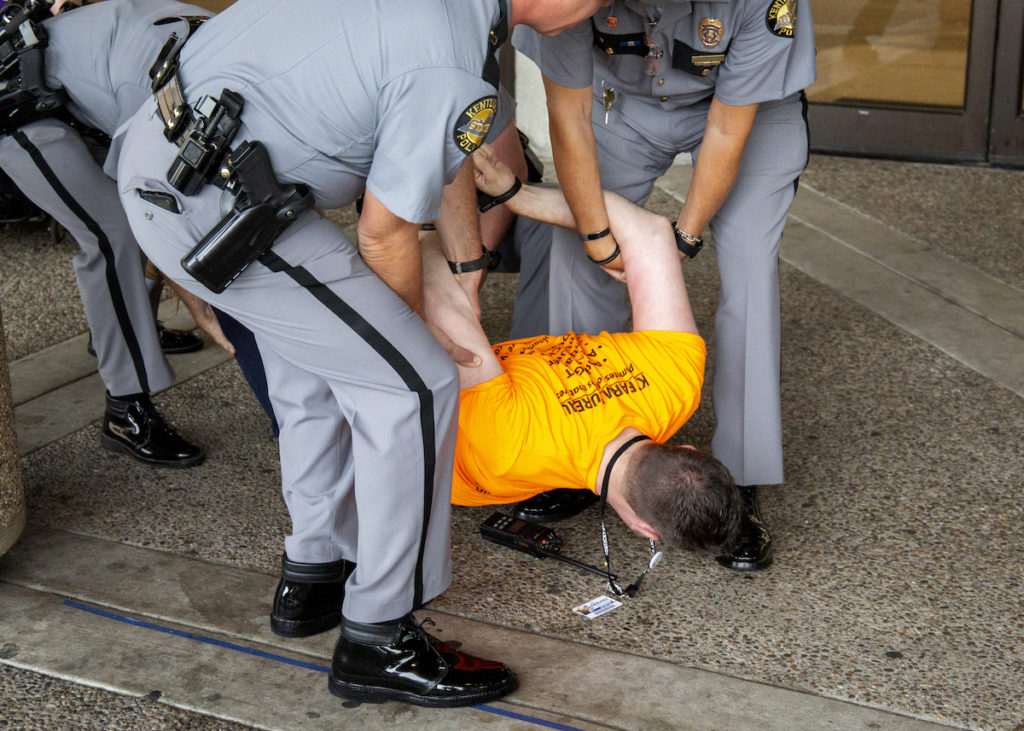 Fairness Campaign Director Chris Hartman was arrested in 2019 when he tried to enter the Kentucky Farm Bureau Country Ham Breakfast with a ticket.Photo by Samuel Crankshaw, ACLU of Kentucky Foundation, Inc.

The charges against three protesters who were arrested in 2019 at the Kentucky Farm Bureau Country Ham Breakfast at the state fair were dismissed on Tuesday in Jefferson County District Court.

For more than a decade, Louisville activist groups have protested at the Ham Breakfast due to the policy positions of the Kentucky Farm Bureau, which, as of 2020, include, “The institution of marriage should only be recognized as the legal union of a man and a woman,” “We strongly believe in the value of all individuals both born and unborn,” “We support the current law that prevents teacher strikes,” “We oppose schools declaring themselves gender neutral” and “Persons on strike should not be eligible for SNAP benefits, surplus commodities or unemployment compensation.” (Read the entire policy book here.)

In a press release, Hartman — who is the executive director of the Fairness Campaign, a LGBTQ activist group — said that the protests will continue.

In 2015, the same three protesters were arrested at the Ham Breakfast — those charges were also ultimately dropped. Hartman wrote about that experience and the protests at large here.

In 2016, LEO asked the KFB to explain its process for developing its book. This is what they wrote:

“Our public policy positions are developed from ideas offered by grassroots members, originating at county Farm Bureau meetings. Our members develop and vote on agricultural, fiscal, social, and other policy ideas they believe are important to Kentucky. The legislative policies approved at the county level move to the state level through a free and fair democratic process. This process ensures that the will of the majority, not the opinion of any one individual, is reflected in our public policy positions.”