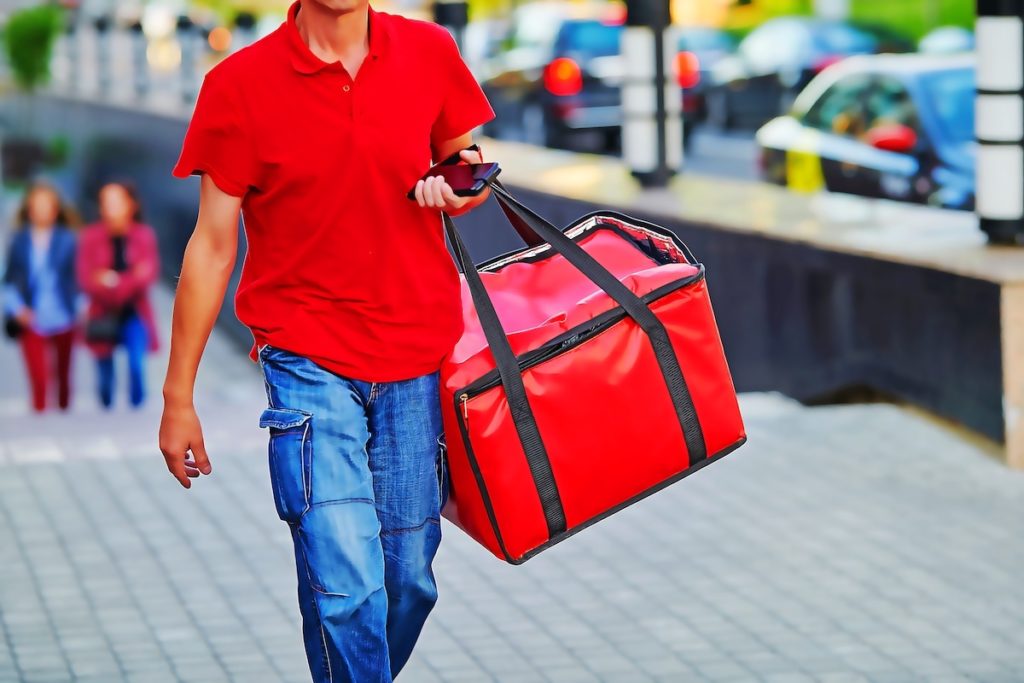 You should pick up your food on your own if you want to help sustain local business.

The boss was trying to explain the GrubHub tablet to the front-of-house staff from arm’s length. It’s a clumsy task since pointing eclipsed half the screen. Whenever he fat-fingered a button he made up for it by aggressively jabbing the teensy Xs, threatening to tip the tablet on its plastic red mount.

I watched the sequence play out from the soda fountain. Cooks didn’t have to learn how to operate the thing. We just had to obey it.

I spent the time sipping from my cup, wondering how “Thus Spake Zarathustra” would sound on a kazoo.

The restaurant’s new toy was my first encounter with online delivery apps. Or at least my first firsthand encounter.

Before then, we’d had a few run-ins with carryout orders under the name “DoorDash.” After the owner did some snooping, he realized we were already being listed. And with an outdated menu to boot.

So what’s a small business to do? Reject orders and risk aggravating the customer behind the veil? The customer might be an out-of-towner at the Marriott, but they could be a first-timer that we lose out on converting to a regular.

If communication is a two-way street, the clumsy back and forth of talking to new customers is like a road littered with potholes and lacking lane dividers.

And adding a digital middleman would be like passing through detours where the signs might be wrong.

“No, sir, we don’t have Brussels sprouts,” I once heard a restaurateur explain to a middleman. “No, I cannot get them… because they are out of season.”

I couldn’t hear the other side of the conversation, but I knew the sound of a man trying to cover his ass. That middleman was caught between telling a customer how seasonal produce works and simply canceling an order.

Recently, in the face of recent labor shortages, I witnessed the latter.

A disheveled Dasher (the title DoorDash appoints to avoid the saying “goon” or the more legally-consequential ”employee”) walked into a Qdoba during the dinner rush.

He had no uniform, no hat, no name tag. Just a branded bag dangling from one hand that announced his association.

“I’m here to pick up an order,” the Dasher announced as he lumbered in. The wall-length line of customers watched as he cut through the lobby, ignoring the line.

“Oh, is that for [so-and-so],” the cashier replied. “We’re out of white rice and chicken right now. If they want to wait it might be half an hour.”

“Did anyone call?” the Dasher replied.

The cashier took a surveying glance. Did anyone call? During dinner rush when the phone’s been ringing and people have been coming in and we’re so shorthanded that we don’t have time to make chicken and white rice?

The Dasher let out an impatient sigh and clicked about on his phone. He left with a handful of customers in line upset by the chicken and rice announcement.

The cashier stood still for a moment with her eyes closed, exhaling so that her head tilted back and shoulders dropped. She was probably hours away from a smoke break. But she could pretend.

The Dasher trotted through the parking lot without looking up from his phone. He continued the search for his next gig once he got to his car, tossing his bag to the passenger seat.

Qdoba’s reputation isn’t at risk one way or another, but I’m glad the Dasher at least had the bag. Explaining to third party customers that it’s not the cook’s fault that cold food was delivered is a Herculean task.

It didn’t take long for the Dasher to track down a new order. Hopefully, it was a good one. Family carryout dinner-on-payday good. Because no matter how gruff he was, he got stiffed too.

DoorDash didn’t actually give that guy anything. So when a delivery falls through, he’s out of any potential tip and the time he invested chasing it. Plus the gas and mileage on his car.

That’s the most remarkable thing about delivery apps, they’re conducting businesses by selling food they don’t make, out of kitchens they don’t lease, delivered in vehicles they don’t own, all by people they don’t have to fairly compensate as employees.

Well, a sage reader might ask, Why does anyone do business with them?

It’d be nice if completely avoiding them was a clear-cut choice. But in a saturated market like food service, being visible is one of the few ways small businesses can compete.

If they’re skeptical of ad buys, can’t open five locations, and can’t ride the coattails of corporate reputation, what better way is there to get the attention of someone miles away?

These delivery services are a signal boost. Even if the fees eat through margins and become tides of red on balance sheets, they still provide more clarity than traditional ads.

So should diners delete the apps and shame them on social media? Not necessarily. But you should definitely change how you use them.

Don’t think of them primarily as an ordering vehicle. Instead, use them as a way to scout for what sounds good and find new places. No more racking your brain for the simultaneous overwhelming number of options and the void of what there actually is nearby.

Once you’ve settled on something, search for the restaurant’s number online. This is especially important for GrubHub, which has a history of faking websites and phone numbers to net more commissions.

After calling in the order comes the hard part: You’ll have to pick it up. I know, the weather’s getting nippy. And the new season of your show just came out. And work was just bleh. But this is how you help sustain local businesses.

Besides, it feels good to be able to get out. To visit a business you love.

And I promise that as much as you love them, they love you more.