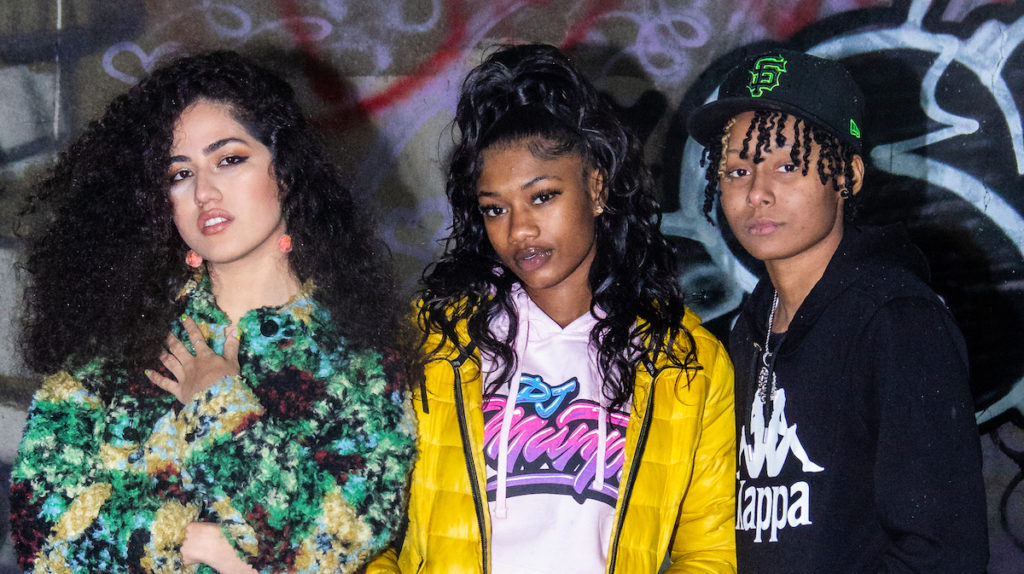 Asly Toro, Anna B and Vibe Like Ty are up and coming Louisville musicians.Photo by Mesa-Iyabo Serikali

With visibility brought on by major label artists from this city, coupled with a hotbed of musical talent proliferating wildly, Louisville is positioned to drive the industry for the next decade. Artists are leveling up quickly, producing sounds that appeal to the nation. The origins of this groundswell were sparked in intimate moments at recording studios.

Louisville native Anna B, 20, didn’t always like her own voice, though everyone else did. A hip-hop artist with a sprinkling of R&B, her sound has just the right amount of gravel to balance out her playful energy. She has grown into confidence quickly, evidenced by lyrics in her as-yet-unreleased track “CEO.”

Watch how you talk to me”

In case that seems like a facade, visualize Anna in the studio spitting aggressive vocals, bringing all her emotion and grit to the fore. She’s as authentic as they come.

“The first time I was in a studio was at the end of my sophomore year of high school when I was 17,” remembers Anna. “It was Midwest Royalty Recording Studio here in Louisville. The walls were covered with silver glitter stripes and black stripes. It was something different.

“I went there because a well-known producer, Tay Beats, worked out of there. I was nervous because I didn’t know how I was going to sound, but I was really prepared since I had already been writing to beats. I made three songs in that session. Even though I only paid for an hour, Tay gave me extra time because he wanted to help me out.”

Anna’s work ethic has never let down, one of the most significant distinguishing features in artists who make it big. This summer she released a club song, “On Da Floor,” that’s getting good play and serves as a solid foundation for the series of singles she will release in the coming months.

“On Da Floor,” by Anna B, available on all streaming platforms.

Born and raised in Louisville, where she claims to have “been gay since I came out the womb,” Vibe Like Ty, 20, is what some would call a stud and gets misgendered on the daily, but she doesn’t mind.

“My mom is like, ‘Doesn’t that make you mad?’ but I really don’t care,” she said. Her graciousness on this front is emblematic of her day-in, day-out energy, which radiates like a full, glowing moon.

If you’re looking for anger or chaos in her music, you won’t find it. There’s no cussing, no killing. When she vents, she does it so kindly it tickles the ear. The song Ty said defines her best, so far anyway, is “Somebody,” which takes a sweet, sensual tone. The first verse sets up the song by spelling out her desire.

I just want to hold somebody

I just want to know what it feels like

What follows is a narrative of her first, intense love, unvarnished and without ego.

The humility she possesses around her art and talent was clear in 8th grade, when she was a student at Western Middle School for the Arts. A teacher, Mr. Michael George, spearheaded the addition of a recording studio on campus, where Ty had her first session.

“Mr. George would always try to find ways to incorporate music into the school. The studio was actually built my last year there. It was down a hall by the gym,” recalled Ty. “We would go there after school to record with Mr. George. I didn’t know if… I was just doing it because they told me that I should or if I was, like, blessed.”

Turns out she was blessed with the gift.

“Somebody” by Vibe Like Ty, available on all streaming platforms.

Originally from Barinas, Venezuela, Latin pop artist Asly Toro, 28, made Louisville her home in 2013 when she was 19. “I have people here and it’s my safe space,” said Toro. But it was back in her home country where she had her first studio experience.

“I was only 5,” Toro said. “I was part of a show like ‘Star Search,’ called ‘Cuanto Vale Show.’ It was 1999. Me and five or six other kids from the show were recording vocals for a Simon Diaz album, the most famous Venezuelan singer. Something that stands out was hearing the orchestral instruments recording in a separate room from where we recorded. The violins. This was the first time that I really got to experience something of that magnitude in real life. It opened my eyes.”

In recent years, the velvety-voiced Toro has shared producers and engineers with some of the biggest artists out of Louisville, forging relationships that she anticipates will go the distance: “Artists are some of the friendliest and kindest people you are going to meet. The connection of making music together means a lot. It can be the people around them, the managers and other people, that are a problem. My song, ‘No Me Llamas,’ which will be out soon, comes from a place of empowerment, addressing a male-dominated music culture.”

“Do not call me

Do not dial my number again

I have to forget it, I don’t know what to do anymore

I want to fall in love and disappear

“Right now, there are a lot of girls coming out and saying what they think. You know, like don’t mess with me. And I feel very liberated,” said Toro.

“Escorpion” by Leu-G feat. Asly Toro, on all streaming platforms. “No Me Llamas” by Asly Toro, dropping soon.