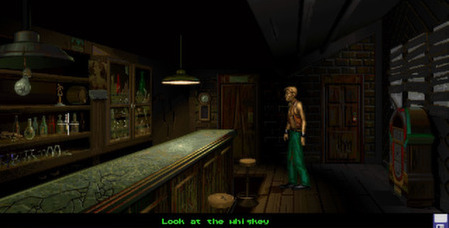 "I Have No Mouth and I Must Scream" paints a harrowing picture of a dystopian world.Photo via Steam

When discussing horror and video games, the usual subjects always pop up: “Silent Hill,” “Resident Evil”…the list goes on. They’re all excellent games, and they come up over and over again for a reason: they’re genuinely scary. But what if you’re looking for something a little off the beaten path? Maybe you’re ready to explore a different game you either forgot about or hadn’t heard of before at all. Fall is the best time to jump into a spine-tingling, chilling new game, especially if your plans for the season are to chill at home in front of the TV. Get ready to dive into some seriously fantastic gems. These are the five most terrifying games you’ve never heard of.

‘GARAGE: Bad Dream Adventure’
Whenever a game is designed with a self-proclaimed surrealist, you know you’re in for something exciting. “GARAGE: Bad Dream Adventure” is a Japanese horror game from developer Kinotrope. Everything about it, from top to bottom, is quite disturbing, from its art style, to the creepy way you interact, with the nightmarish way you maneuver through the landscape of solitary, bizarre visuals. It’s a point-and-click adventure game, but it feels like you’re the only person floundering through an uncomfortable nightmare. As a tiny, strange little robot, you work your way through a lifeless dystopia of rusted machines, rife with lifeless faces and other grotesque visuals. It may be one of the weirdest things you ever play, if you seek it out. Perhaps adding to its intrigue is the fact that it was lost for some time, thought to be unrecoverable. But it’s proven to have been well worth the effort to find it once more. And it’ll scare the absolute daylights out of you.

‘Yume Nikki’
“Yume Nikki” is absolutely adorable at first glance. How could a pixelated, colorful adventure starring a little girl be scary? Oh, easily. First, consider its origins. It’s a cult classic from a mysterious developer named Kikiyama that follows a young girl named Madotsuki. As Madotsuki, players navigate some truly unsettling but seemingly unconnected dreams. They’re weird, sure, but nothing too scary to start with. But give it some time. As “Yume Nikki” marinates, it gets more than a little creepy. Madotsuki begins exploring tableaus filled with bleeding, shape-like creatures; bird women; and a monochromatic monster named Uboa. It’s all very difficult to piece together as you work through each individual area, but that’s the nature of nightmares, after all. They rarely make sense. And “Yume Nikki” makes you feel as though you’re caught in one that’s sprawling and labyrinthine, despite its simple, pixelated graphics.

‘I Have No Mouth and I Must Scream’
Based on Harlan Ellison’s short story of the same title, “I Have No Mouth and I Must Scream” isn’t much of an obscurity, but it rarely gets its fare due as a horrific adventure that’s hard to shake from your brain. It paints a harrowing picture of a dystopian world that has to be seen to be believed. An omnipotent artificial intelligence named “AM” has wiped out all of humanity but for five people, who he decides to keep alive to torture for his own satisfaction, using scenarios constructed based on each individual’s shortcomings to ensure they’re forced to confront their demons over and over again. That includes forcing a man to spend time with a tribe in which killing its members is all but a forgone conclusion among other deeply uncomfortable settings.  It’s a thrilling psychodrama in which there initially appears to be no true solution to the protagonists’ dilemmas, and their perpetual suffering is hard not to feel in your soul. And if you make it to the end, well, that only serves to make the entire ordeal that much scarier. Do we really welcome the machine-based future?

‘Eastern Mind: The Lost Souls of Tong-Nou’
Eastern Mind: The Lost Souls of Tong-Nou is downright terrifying. It’s a niche computer game forged in the ‘90s with psychedelic imagery and an inscrutable narrative. It’s a weird-seeker’s paradise, stitched together by a cacophonous soundtrack and neon shapes straight out of developer Osamu Sato’s (LSD: Dream Emulator) feverish nightmares. It’s less of a game than it is a journey through the inner recesses of Sato’s mind. The “protagonist” Rin discovers his soul has been stolen by the titular island of Tong-Nou, and if he can’t reclaim it he’ll eventually wither away and die. After being given a temporary soul to last him just long enough to restore his own, Rin journeys to the island, which actually ends up being an enormous, disembodied human head. It’s bizarre, uncomfortable, yet wholly engrossing stuff, if you fully commit yourself. But it might be difficult considering how abjectly strange and uncomfortable some of the characters you meet along the way truly are.

‘Harvester’
You want guts? You want gore? Harvester is delightfully kitschy, but it serves up a bloody good time. Players take on the role of amnesiac Steve, who wakes up in a town in the ’50s called Harvest. No one believes he’s lost his memories, and everyone there appears to be quite bizarre and unusual, prone to violent acts at just about any moment. Steve is continually pressured to “join the Lodge,” and through completing several strange tasks, he ends up unraveling some trippy secrets about the town he finds himself in that he’ll never be able to unlearn…and neither will you. Oh, and plenty of people get killed. You might not be totally scared of “Harvester” in the same way you would a game like “Silent Hill,” but it’s still a thrill ride you’ll very much want to take.