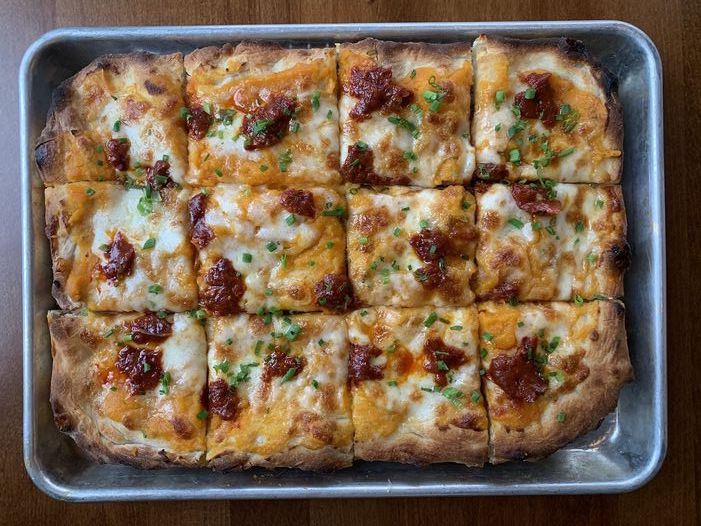 If you go to Square Cut Pizza in Shelby Park expecting, well, square cut pizza, you won’t be disappointed.

The sit-down restaurant at 741 E. Oak St., which opened two weeks ago, is introducing a new version of the iconic Italian cuisine to Louisville: Roman style pizza — which is, of course, cut into squares.

Roman style pizza is the kind of pizza you’ll find everywhere if you visit Rome. If you pop into a shop there, you’ll discover chefs making pizza on large, sheet trays. They take it out of the oven, cut it and usually serve it in a box for you to take with you and munch on as you go about your day. It’s typically crunchy on the bottom and the top but soft in the middle.

Emil David, the owner of Square Cut Pizza, knows this tradition well, because he moved to Italy from the Philippines when he was 16. As a teen, he didn’t have much spending money, so Roman style pizza was his go-to food to get while out. Then, he became a professional chef in Italy, learning the country’s cuisine in the kitchens of five star hotels — living in Rome for nine years total.

Eventually, he moved to the United States, managing and cooking at several high-profile restaurants and companies, and then transitioned to Louisville where he owns three different concepts with his wife and native Kentuckian Liz David: Hot Buns Food Truck, the Sugar Room (an ice cream parlor) and — now — Square Cut Pizza, which he opened because there are no other solely Italian restaurants in the Shelby Park neighborhood, where the Sugar Room also is.

While David is well-acquainted with Italian food, he still decided to do something different with Square Cut Pizza, picking a menu that goes outside of his comfort zone. Instead of the pasta he was used to making in Italy, he decided on Roman style pizza, which he has made at home but has never sold at one of his restaurants. It was the same with charcuterie, which is a main feature on Square Cut Pizza’s menu.

The pizza ($16-$21) is a blend of traditional and David’s innovative style. There is a roasted potato and sausage pizza, because that is often an option in Rome. But, he decided to top it with stracciatella cheese, which is a little creamier than the traditional crescenza-stracchino. Square Cut Pizza’s seasonal options will be more daring, too. The current option is an nduja pizza, which is a spicy, spreadable salami common in Southern Italy, with a butternut squash puree as the base.

In addition to wanting to expand his skillset, David chose to focus on charcuterie ($11-$19) because it will help the restaurant produce less waste. Making his latest restaurant sustainable was a major goal for him.

“The idea of the restaurant is to use most of what we grow or what we raise,” said David.

This philosophy comes into play in other areas of the restaurant, too. David burns scraps from some of his dishes, such as butternut squash and apple peel to create an ash that he’ll add to other menu items. The burnt apple peel, for example is used to create a serum to mix with mezcal and Ale-8-One in one of the restaurant’s cocktails.

Square Cut Pizza finishes off the Italian experience with tables in the kitchen, where guests can interact with the chefs. David says he hopes this makes a visit to his restaurant an experience.

The restaurant is located in the former home of Scarlet’s Bakery. In the same building — albeit separated — is David’s Sugar Room, which sells candy-topped soft serve ice cream in unique flavors such as burnt marshmallow and cheesecake. David opened the Sugar Room this summer at the intersection of Oak and Shelby streets, the latter of which is a part of the Shelby Park neighborhood that is quickly turning into a row of independent restaurants and bars, also featuring Toasty’s Tavern and Trouble Bar.

David said that he appreciates the surrounding neighborhood and Louisville in general.

“I think the support of people to small businesses here is better than I’ve ever seen,” he said.