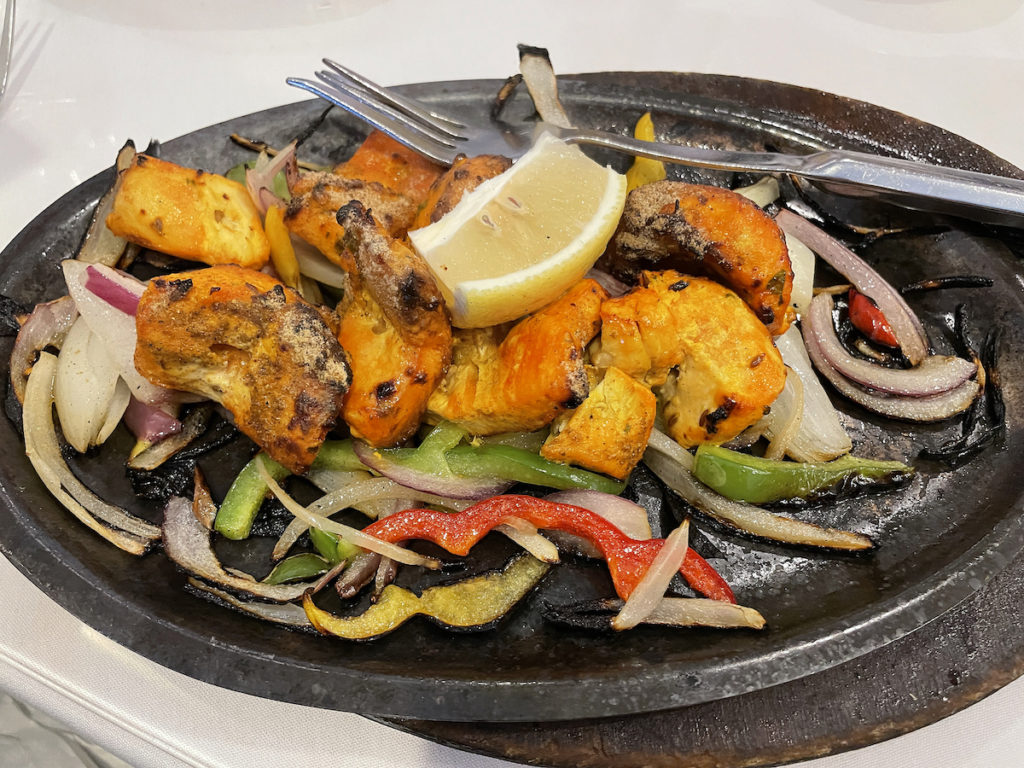 Straight from the scorching heat of the tandoor oven, skewered reddish-golden chunks of seasoned swordfish and crisp grilled veggies arrive sizzling like fajitas on a heated steel plate | Photos by Robin Garr.

I fell in love with Indian food a mighty long time ago, when the curry houses that surrounded London’s Victoria Station offered me a delicious — and cheap — refuge while the very young me was seeing London on £5 a day.

But it took a lot longer before Indian food came to Louisville, a gap that Indian-food-loving friends and I had to fill, sort of, with occasional trips to the region’s only Indian eatery in Cincinnati.

That drought finally ended during the ‘90s, when Shalimar opened in the Hurstbourne Parkway quarters that it still occupies. As one of the first Indian restaurants in Louisville, it has earned a loyal following with consistent presentation of authentic Northern Indian cuisine.

Things have gotten better for aficionados of Indian fare since then, with at least a dozen good options to choose among and more on the way.

To be honest, with so many Indian options and always the excitement of something new, I don’t get back to the originals as often as I should. So when my brother, Matt, and my sister, Amy, were in town at the same time, Shalimar beckoned as a great destination for a good, affordable lunch for four.

The menu features northern Indian specialties, including a selection of dishes from the tandoori clay oven. You’ll find about 70 entrees, categorized in chicken, lamb, goat, seafood and vegetarian dishes plus tandoori-roasted items and rice biryanis and pulaos. Prices range fairly closely from $10.95 to $14.95 for most dishes, with a house special biryani at $17.95, a tandoori mixed grill or vegetarian thali (sampler platter) for $19.95 and a meat-and-veg thali for $20.95.

There are about 16 appetizers to choose from — almost 20 Indian breads, and five Indian desserts. In addition to a half-dozen Indian non-alcoholic beverages, you may choose among short, affordably-priced selections of cocktails, beers and wines, including a few Indian labels.

A vegetable pakora appetizer ($4.50 for five) got us off to a good start. India’s answer to fritters, these ping pong-ball-size spheres of batter-bound bits of onion, bell pepper, cauliflower and Indian spices are deep-fried dark golden brown. They were hot and fresh, not at all greasy, and came with a mild tamarind chutney and a fiery green cilantro-mint chutney.

Chana masala ($10.95), an iconic dish from Northern India, is one of my favorites. It’s a bowl of long-simmered, soft chickpeas in a thick sauce infused with garlic and ginger flavors and Indian spices. I wanted it hot but not “Indian hot,” but our rather taciturn server declined to consider that option.  Either medium-hot or Indian hot, they said, walking off. Okay, medium, then, whatever. In fairness, if it wasn’t as spicy as I might have liked, it was warm enough to keep me happy.

Chana masala traditionally comes with puri — puffy pillows of deep-fried wheatbread — but I had to search those out from the bread menu at $3.50 for two. It was worth the effort; a great match with the chickpeas.

Vegetable biryani ($11.95) was a generously portioned, appetizing bowl of turmeric-tinted basmati rice chock full of veggie bits: big chunks of potato, cauliflower, carrots, onions, green beans, peas, carrots and cilantro. Never has the command “Eat your veggies” seemed so welcome. It was mild at my sister’s request, but so subtle and aromatic that it was delicious all the same.

Shrimp masala ($16.95, plus $1 for added mushrooms) brought a blend of Indian flavors to the table: A half-dozen fat, firm shrimp were first grilled on the tandoor, then served in a thick, gently spicy tomato-based masala sauce, garnished with fresh cilantro. The tandoor delivered a smoky, sweet flavor that married happily with the mild masala flavors.

The tandoori fish treatment ($16.95) gives a dozen firm, white and mild swordfish chunks a spicy yogurt marinade and then passes them through the tandoor oven, and we were glad it did.  Placed atop colorful strips of grilled red, yellow and green bell pepper and onion, the fish came out sizzling like fajitas on a heated steel plate. This dish may have been the winner of the evening. Purportedly medium-hot, it showed some warmth but was not a particularly spicy dish.

Two orders of naan flatbread alongside ($2.50 each) went well with everything. A half-dozen pieces were puffy, tender and nicely charred. Two salty yogurt lassis ($2.95 each) were also prepared well, a refined recipe with whiffs of cumin and coriander elevating the thick, rich yogurt drink.