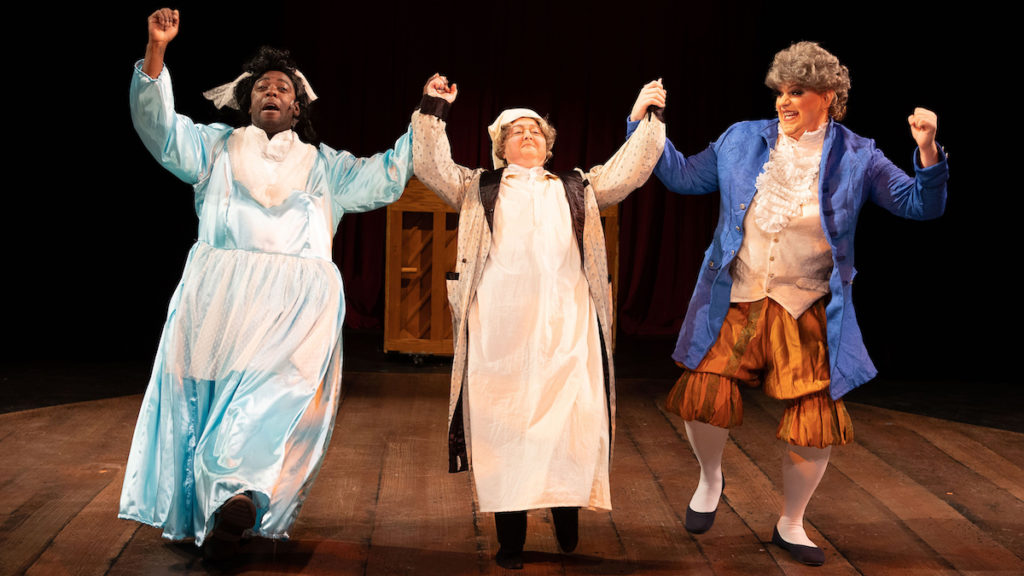 Tony Smith, Kristy Calman, May O'Nays in "Scrooge in Rouge."Photo by Bill Brymer

Black Friday, CyberMonday, Festivus, and that other popular holiday are still weeks away, and in normal times I’d be shining my Doc Martens, polishing my bugle, and gearing up for this year’s battles in the war on Christmas.

But these are not normal times: it’s been two years since last I heard a shopping mall sound system blaring schlocky, sentimental arrangements of holiday tunes. So at least for the moment, I’m declaring a truce.

Until this past weekend, it had also been almost two years since I’d sat in a conventional indoor theater space with a large, happy crowd. I hadn’t realized how much I had missed that.

The occasion was Pandora Productions’ premiere of “Scrooge in Rouge: an English Music Hall Christmas Carol” at the Henry Clay theater. Covid protocols were firmly in place (including mandatory masking and proof of vaccination or testing), but if that had any inhibiting effect on the audience, it wasn’t discernible.  It was just plain fun.

“Scrooge in Rouge” is a campy romp — basically a quick change, cross-dressing musical within a musical.  The idea is that a 19th century music hall was slated to stage an elaborate 20 person production of Dickens’ “A Christmas Carol,” until an outbreak of food poisoning brought down 17 members of the cast.

Still, the show must go on — even if at one point the errant emcee announces that the production is “The Travesty A Christmas Carol, by Charles Darwin. “

And so three cast members — plus their accompanying pianist, Alfred DiCappo (played with impeccable musical wit by onstage pianist and musical director Russell Cooper) — boldly set out to play and sing all the parts. It’s a recipe for absurd, shape-shifting, gender-bending humor. But it’s also a great pretext for reviving the corny ingenuity of old-fashioned comedy. This is the kind of script that primes the pump with tropes like the vintage “henway” joke. (What’s a henway?…..about four pounds… rimshot).

The book and lyrics (Ricky Graham), music (Jefferson Turner), and other material (Jeffery Roberson and Yvette Hargis) channel and update strains of gently transgressive humor and musical styles that run from music halls and vaudeville through the Marx Brothers and Mae West up through Carol Burnett and beyond.

This is the kind of show where performance is everything, and this production, co-directed by Michael J. Drury and Keith McGill, is a fantastic carnival of laughs and comic songs.

The essence of any play within a play is to skew reality from the outset, and in this shape-shifting delight, just keeping track of who is playing whom is mindboggling fun.

May O’Nays plays music hall performer Lottie Obligatto, who in turn plays a slew of roles, (including the Ghosts of Christmas Present and Future) and early on plays an earnest fundraiser who memorably solicits Scrooge in song to help the poor and destitute: “You’re well endowed Mr. Scrooge,” sings the big-voiced Obligatto. “Quite well-endowed, Mr. Scrooge. Whilst others got the short end of the stick….”  Then, having gotten Scrooge’s attention, the fundraiser closes with the ask: “So the question this arouses… will you reach into your trousers…. And show the world… just… how … big…. You are!”

Tony Smith plays a music hall performer named Charlie Schmaltz, who also plays a slew of characters, including Bob Cratchit (aka Bob Crabcake), Marley’s Ghost, the Ghost of Christmas Past, and Mrs. Fezziwig, who at one point offers Scrooge advice on gift-giving: “A foolish man gives his wife a grand piano. A wise man gives her an upright organ.”

And then, of course, there is the great miser Scrooge himself — portrayed by the music hall character Vesta Virile, who is performed by Pandora cast member Kristy Kalman.  This Scrooge may be “so mean that he’s send a Mother’s Day card to an orphan, but Kalman is an outrageously funny tour guide on this droll voyage through the past, present, and future.

As one expects with Pandora Productions, all the technical aspects of this production are superb, and given the complexities of the quick change action required for the script, it wouldn’t be that much of a stretch to say that technical aspects function as active characters in telling this story: Addie Reinhart (stage manager); Molly Kays (choreography); Karl Anderson (set designer); Jesse AlFord (lighting designer); Susan Neeson Toy (costume designer); Ryan Bennett (props designer); Alex Cooper (sound designer); Cal Reed (sound engineer); and Victoria Campbell (sound consultant).

Speaking of characters in the production: it turns out that the three actors on stage are not sufficient in number to cover all the necessary parts….  And so it will happen that at a critical moment in the action someone will be plucked from the audience to play a role.  Be ready for anything.