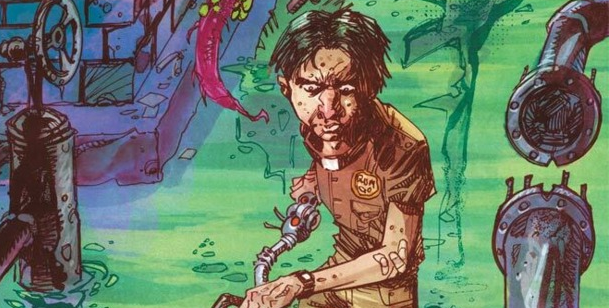 The colors blossom on the pages of "Soul Plumber."

Created by Marcus Parks, Henry Zebrowski, Ben Kissel and John McCrea
The creators of Last Podcast on the Left have decided to make a comic book, and it is a wild one!  The DC lines of horror books are first rate and “Soul Plumber” doesn’t disappoint. It begins with failed seminary student Edgar Wiggins, now working as a gas station attendant when the “Soul Plumbers” van comes in for a fill up. Seeing who they think is an easy mark, they invite Edgar to a seminar where, for a small fee, you can learn how to build an exorcism machine. Of course, Edgar is inspired but short on the funds it takes to buy the blueprints, so he just steals them. His zeal for the divine keeps him working on the machine even though he has to take shortcuts. Once it’s finished, it works, but maybe not how Edgar expected. He’s captured something, he believes, but is it a demon? So ends issue No. 1 on that cliff hanger!

Issue No. 2 gives us a bit of back story on Edgar, and the entity he’s brought forward. Lots of craziness ensues including blood and cursing. The art on this book is ugly and scratchy in a perfect way to tell the story. The colors blossom on the page though, in a way that keeps it pleasing to the eye.  I’m on the edge of my seat to see if these creative guys can keep this story as wild and interesting as its beginning!

Writer: Si Spurrier
Artist: Nathan Gooden
At the end of the 19th century, the Gold Rush was coming to a close, leaving the mines dry and colorless. There were communities driven to violence by greed and desperation, tearing families apart. Nettie Bridgers is the mother of one such family, and now she is on the hunt for her son after his father abandoned him in the snowy Yukon Territory. 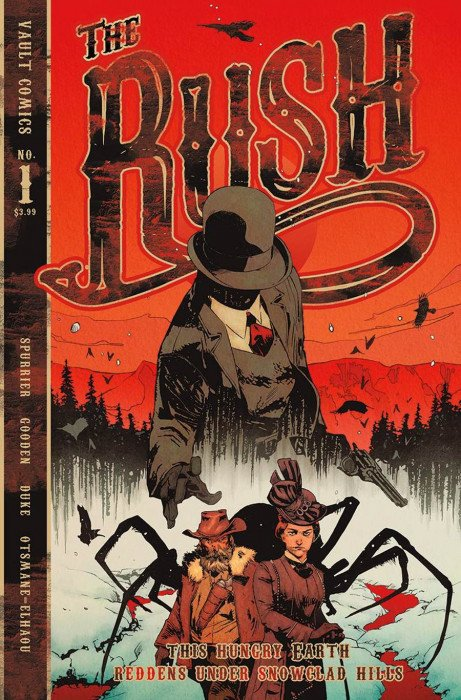 “The Rush” No. 1 opens with Nettie writing a letter to her son, Caleb, describing her journey to Dawson City, where her husband claimed he left him. Along her journey she attempts to get word of her son to no avail — until a deranged man attempts to sneak into her tent one night. With her gun pointed at his nose, he confesses that he knows Caleb and all it takes to find him is a two-day journey north to a little place called Brokehoof. When they get there, they find a snowy tundra that spring had forgotten — and the snow is littered with unfamiliar tracks.

Something is drawing men to these lands.

The story is one splattered with blood and Addison Duke’s coloring really highlights this. There will be several pages of muted cool whites and grays, the skin of the characters faces being the only warmth, and then you’ll turn the page and it’ll come alive with bright reds and oranges. The art is just as striking as the story itself.

What strange creatures await Nettie at Brokehoof? And will she find the answers she’s looking for?