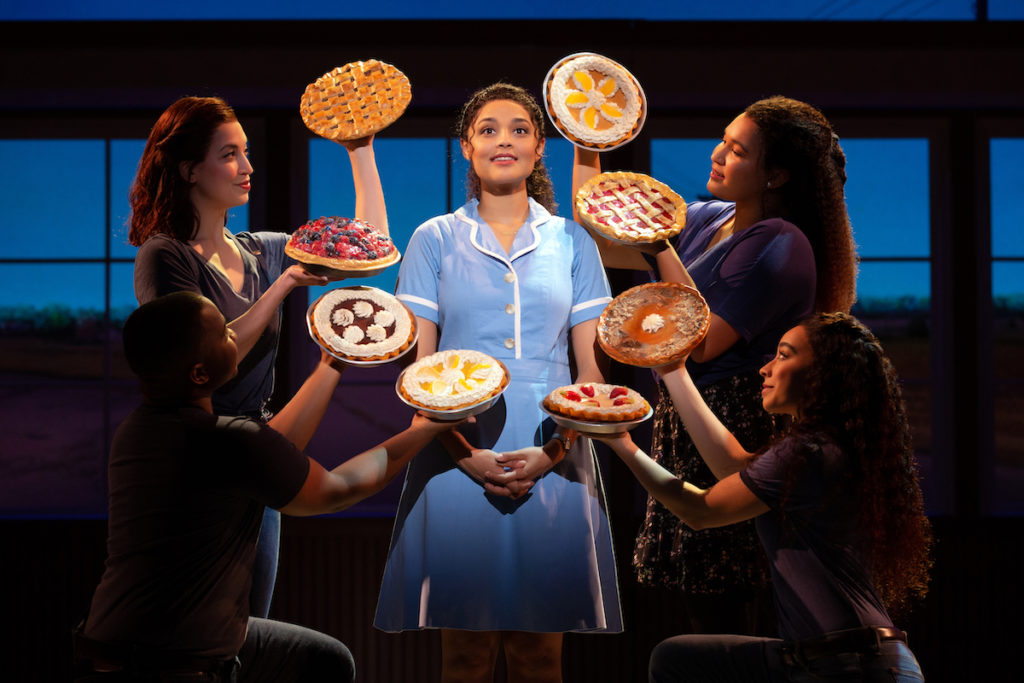 “Waitress" tells the story of Jenna, who works at a small-town diner and is a creative genius in the kitchen.

Sugar. Butter. Flour. This refrain is uttered over and over again throughout the score of “Waitress” to remind the audience not only of the universal ingredients found in every pie – even the titular character’s esoteric ones – but also what is common to the human experience. “Waitress” is very much a comedy, but when one savors the show’s more subtle flavors, it is also about pain, love, loneliness, and feeling trapped. This complicated dish was served in Louisville Tuesday night (finally!) with all the polish and professionalism that only PNC Broadway in Louisville can provide. The show runs through Sunday, Nov. 14.

Like the movie “Waitress,” the musical tells the story of Jenna (Jisel Soleil Ayon), a waitress at a small-town diner. A creative genius in the kitchen, Jenna has the misfortune of being in a loveless and abusive marriage with Earl (Shawn W. Smith), and to her dismay she learns with the help of her friends and coworkers Dawn and Becky (Gabriella Marzetta and Kennedy Salters) that she is pregnant. It’s not something that she planned or that she even wants, but she is nevertheless committed to keeping her child. She tells all of this to her new gynecologist, Dr. Pomatter (David Socolar), with whom it shouldn’t be too much of a spoiler to say Jenna begins an affair.

At the top of the show, the tone is zany, almost cartoonish, and at first, when there are some interstitial moments that are perhaps a little more serious, there is some emotional whiplash. However, this is a quality shared with the screenplay of the film, and it isn’t long before this quirk begins to make sense in the realm of the story. Like Joe (Michael R. Douglass) – one of Jenna’s regulars – attests about her Devil’s Food Oasis Pie: “…each flavor opens itself, one by one, like a chapter in a book.” There’s more poetic dialogue where that came from, making “Waitress” the rare musical with a book just as rich as its score.

Speaking of the score, Sara Bareilles’ not commonly known early background as an a cappella singer and choral arranger is on full display in her composition. The harmonies as written are very close, resulting in pleasant bell tones and overtones. Musically, some of the most gorgeous moments of the evening are found when Jenna, Dawn, and Becky get to sing together. Almost every character gets a moment to shine through song, but it’s Ayon’s rendition of “She Used to Be Mine” that speaks to the show’s central theme and brings the house down.

Acting is often secondary in musicals, but thanks to the actors’ respective skills and tight direction for the tour from Susanna Wolk, there are several nuanced performances. Ayon does the heavy lifting as the central character without breaking a sweat and, along with Marzetta and Salters, seamlessly creates a believable display of the kind of friendship that can only be forged in working eight-to-ten hour shifts every day with someone.

Smith walks a fine line in the thankless role of Jenna’s husband. He’s a character designed to be hated – deservedly so, but there’s also a moment or two given to the abject terror that fuels his behavior. Douglass’ Joe has some of the best lines in the show, and he delivers each of them expertly. Cal (Jake Mills) and Ogie (Brian Lundy), Jenna’s line cook boss and Dawn’s goofball new love interest respectively, capitalize on every moment they’re given, and Socolar displays a physical wit that almost distracts from the problematic nature of the relationship between his Dr. Pomatter and Jenna.

As messy and complicated as that relationship is – and as surprisingly lewd as “Waitress” sometimes is – it is nonetheless important to see Jenna navigate it. In life, sometimes the only humanizing choices are bad ones, and it is refreshing to see a musical embrace that truth so unashamedly, one fact among many that make “Waitress” a must-see during its limited run in Whitney Hall. As PNC Broadway in Louisville President Leslie Broecker said during opening night’s curtain speech, this does mark the third attempt to bring the show to this city, and it is the opener to their first season since the pandemic began. To borrow a phrase that she used, seeing live, big musicals again is a sight for sore eyes, one Louisville audiences deserve to see for themselves.

There are still tickets available for “Waitress,” which runs through Sunday, Nov. 14. You can find them here.