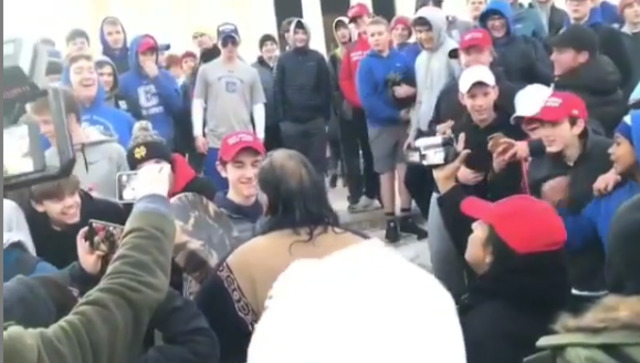 The young man from Covington Catholic High School who made waves in 2019 during an altercation with a Native American man in Washington, D.C. has apparently become a Daily Mail pundit, commenting on the Kyle Rittenhouse trial.

In a Nov. 16 column for the Daily Mail, a tabloid in London, Nicholas Sandmann compared himself to Rittenhouse, who currently is on trial for charges related to fatal shootings of protesters in Kenosha, Wisconsin.

Sandmann said that Rittenhouse was not being given a fair shake during the trial or during the events that led to it, alleging that “the liberal media” and left-leaning politicians were quick to condemn Rittenhouse for fatally shooting two people and wounding another in 2020.

“Make no mistake: even the strongest of people cannot resist the mental impact when the media war machine targets you,” Sandmann wrote. “With Kyle’s name dragged through the mud, and the clear effect it is having on him, many have started to ask the question whether Kyle should sue for defamation.”

“While I am by no means an attorney, I have gained some experience on the ins and outs of defamation and can offer an educated guess on what the outcome would be if Kyle were to sue,” continued Sandmann, who, according to other outlets, is now 19.

On Jan. 18, 2019, Covington Catholic High School in Park Hills, Kentucky, made national headlines when a video of an altercation involving one of its students and a Native American activist was uploaded to social media.

The original video, which lasted only a minute, showed Sandmann, a student at Covington Catholic at the time, wearing a red baseball cap emblazoned with the words “Make America Great Again” — former President Donald Trump’s slogan — with several classmates in the background. Sandmann, then 16, was smiling and standing right in front of Nathan Phillips, a Native American activist of the Omaha Nation who was playing a drum while chanting and singing.

As later footage revealed, the CCHS students were attending a March For Life event while Phillips had participated in a simultaneous Indigenous Peoples March. As both of the demonstrations ended, a group of Black Hebrew Israelites began heckling the high school students who then responded with their own chants. Phillips, seeking to diffuse any conflict, approached the students, ending up in front of Sandmann, who did not back away. As Sandmann revealed later in a statement, he believed that he was diffusing the tense situation by holding still.

What followed the incident was a veritable storm of social media reactions and quickly evolving coverage from most mainstream media outlets. A New York Times article published the following day called it an “explosive convergence of race, religion and ideological beliefs.”

As longer videos from the altercation were released and more bystanders were interviewed, publications like the Washington Post, CNN and NBC all revised their coverage. Sandmann later filed lawsuits against all three; according to The Cincinnati Enquirer, the lawsuits against the Washington Post and CNN have been settled. The Covington Diocese originally condemned the students’ actions but after launching an investigation, later stated that the students were not at fault. A documentary about the incident premiered this summer.

Rittenhouse’s trial also has driven conversations about race and intent, as the incident unfolded during the 2020 unrest in Kenosha after police tasered and shot Jacob Blake, a Black man. Rittenhouse, a Blue Lives Matter supporter, allegedly had heeded a call from a militia group to travel to Kenosha to “defend” it during protests and Black Lives Matter rallies. At 17, Rittenhouse allegedly brought an AR-15 type of rifle with him and ultimately used it to shoot two men and injure another. During his ongoing trial, Rittenhouse has claimed that he was acting in self-defense.

Sandmann felt connected to Rittenhouse’s situation, he wrote in the Nov. 16 Daily Mailcolumn.

“Kyle was almost immediately labelled a ‘white supremacist’ and a ‘domestic terrorist,'” Sandmann wrote. “To many, my red MAGA hat clearly meant that I was a racist.”

“Kyle wasn’t given his day in court by his critics,” Sandmann also said, while Rittenhouse is participating in his actual trial that is being held in a court.