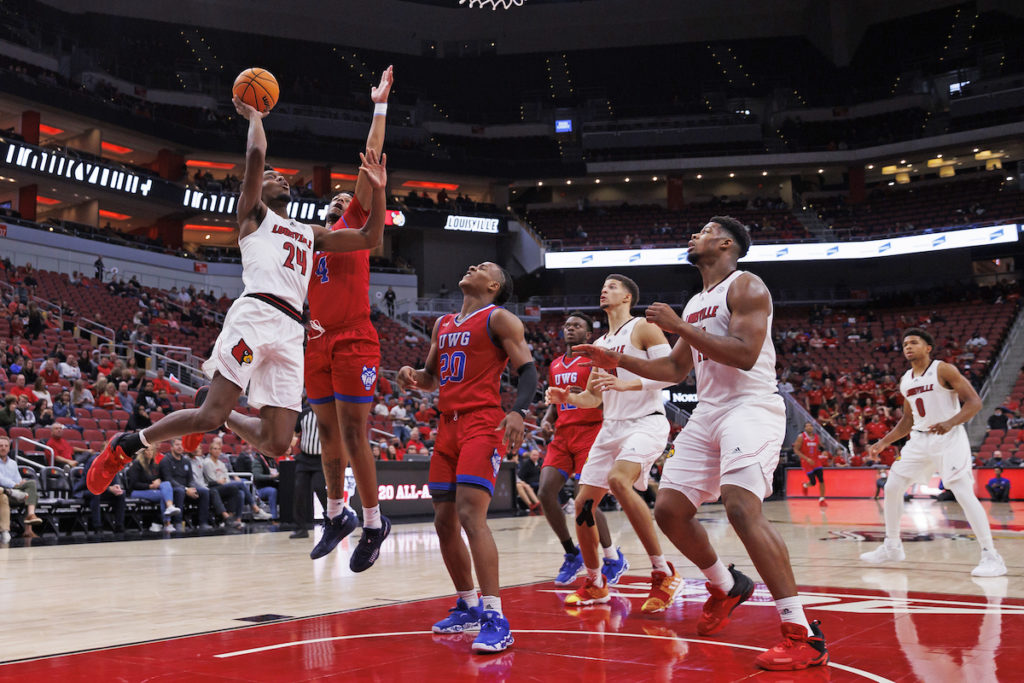 Restock, retool — and get moving!

You could say that’s coach Chris Mack’s do-it-now plan for revivifying the fortunes of UofL’s men’s basketball team. The Cardinals debuted their 2021-22 club last week with eight new players on a 14-man roster. That’s a lot of restocking.

And the incoming eight aren’t merely fill-ins and future hopes. Just two of the new faces are freshmen recruits, with six battle-hardened college transfers ready to play — and they already are.

In its first three games at the KFC Yum! Center, Louisville fans have seen a parade of lineup changes, particularly among four new guards, who go in and out in ever-changing combinations. Five forwards have played, and three centers — with yet another center set to return soon from an injury. Four centers!

All those changes, of course, can contribute to a lack of continuity. In a loss to Furman Saturday, Louisville bumbled its way to just three points in the first seven minutes of the second half. Then in overtime, the Cards forgot to rebound missed shots and lost 80-72. But, Monday night, Louisville (2-1) looked sharp and played fast in a victory over Navy.

All said, it is probably something of an achievement that the refs so far haven’t dropped a flag on Louisville for too many men on the floor!

But the plethora of players is just one facet of the do-it-now plan. Mack has hired a new assistant coach named Ross McMains, who is a teaching specialist in speeding up the play of teams. A guru of giddy-up and go, if you will, who has worked extensively with professional and international teams, McMains will be charged with instilling a team temperament of playing fast.

“I think when you think of pace, you think of how fast the shot goes,” says Mack, who ranks 21st in victories among active NCAA coaches (including nine previous years at Xavier, with this being his fourth season at Louisville). Mack believes McMains can help him bring an international style pace to his team: “We’ve got to be able to commit to running the floor.”

He means run on offense and defense — put the pedal to the metal.

“We’ve always wanted to play fast, but we didn’t want it to be recess,” Mack adds. “Just playing fast, there’s more to it than that. We do not want to be a chaotic, bad shot-taking team. You have to play to your personnel, and I think our personnel fits this style.”

The proposed speed up is desperately needed. Mack’s style hasn’t been slow — maybe more measured than run and shoot — but the Cardinals slowed dramatically last season. The coach says he was forced to a more deliberate pace with a squad light in numbers and plagued with injuries. Louisville was also among the colleges that missed the most games because of the pandemic. Hard to sustain momentum.

There’s something to that. But to many observers it appeared the Cardinals simply dropped anchor. A guy would get a rebound at the defensive end, come down, square himself up, pour a cup of coffee and then hand the ball off to a guard to bring it up the court — to go against an opponent’s defense that was set up and ready.

One imagines the coach would be all out in establishing the speed up, and blending in so many new players. Which he was — up until the first game, when he began a six-game suspension laid on him by the university for a staff personnel dust up last spring. Mack will be sidelined through the rest of November, including missing Louisville’s two-game tour of the Bahamas next week. In his absence, assistant coach Mike Pegues is handling the team. Mack returns to the bench Dec. 1 for Louisville’s game at Michigan State.

Here’s a glance at some of the key newcomers:

Louisville’s freshmen include top prospect forward Mike James, who is out for the season after knee surgery. Also new is Roosevelt Wheeler, who stands near 7 feet, but says his game takes him above the rim.

Soon to return to action after a wrist injury is 6-11 Gabe Wiznitzer, a good shooter, who likes the role of a passing center.