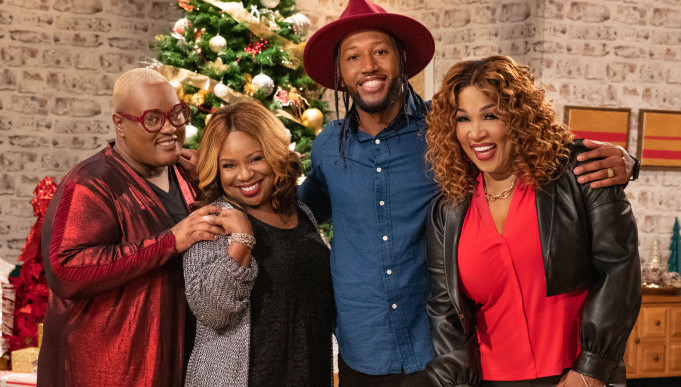 Darnell Ferguson (center right) will be on "The Big Holiday Food Fight" this Tuesday.Via OWN

Louisville’s own “SuperChef” will be on yet another TV show tonight.

Darnell Ferguson, who owns the seafood restaurant Tha Drippin Crab in  Russell, was on TV just about a month ago as a competitor on “Guy’s Grocery Games,” a cooking competition show hosted by Guy Fieri. It marked his ninth appearance on the show, one of dozens of TV appearances in his career.

Tonight, Tuesday, Nov. 16 at 9 p.m., he’ll be on “The Big Holiday Food Fight” on the Oprah Winfrey Network (OWN) as a judge, alongside chef Gina Neely and actor James Wright Chanel. The hour-long episode, “Battle of the Spices,” is the first of five in the series, although the show moves to an 8 p.m. timeslot starting next week.

“The Big Holiday Food Fight” is a holiday-themed competitive cooking program hosted by Kym Whitley where three contestants (who, unlike competitors on other cooking shows, are not professional chefs) prepare family recipes for the judges. The winner takes home a stocking stuffed with $5,000 in cash.

You can watch the episode on TV, on the OWN app,  or on the OWN website with a paid TV subscription.

Check out a preview of the series here:

CORRECTION: A previous version of this article included the wrong date for the show’s premiere. It is this Tuesday, Nov. 16.