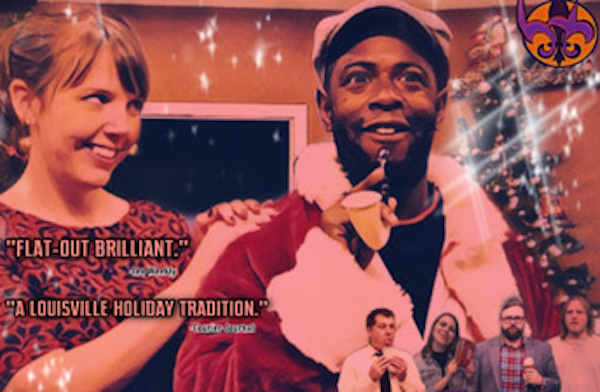 “The Kings of Christmas,” a madcap local Christmastime show, has once again returned to Louisville after 10 seasons. Its run this year will include the show’s 125th performance ever.

The play centers around the King family and the very quirky characters who compose it. (Even the cast breakdown for the show makes room for eccentricities  ––  the actress playing the mother character can be, and has been, younger than at least one of the actors playing her sons.)

Carter King, a cynical, Scroogelike arts critic, comes home for Christmas and is quickly put on “trial” –– in the King family’s living room  ––  when he’s suspected of having killed Marley, the family cat. His father, an Elvis-impersonating magician called “The Magistic [sic] King,” disappeared in a Christmas Eve magic act ten years prior, and the family is still struggling to work through the grief and the mystery of how he died. The family members, along with their love-stricken neighbor Wendy, assemble to figure out what happened to their beloved cat –– and their father.

In a press release, playwright and director Doug Schutte said the show is “just like A CHRISTMAS CAROL…if Charles Dickens were an idiot.” He also says that the show is the only one of its kind “that brings you the ghost of an Elvis-impersonating magician, a cat named Marley who may or may not have just used up life 9, a living room trial, bourbon in boots, and a family that will make you feel SO much better about your own.”

LEO theatre critic Marty Rosen’s past reviews of the show have called it “comic writing of a high order” and “a wonderful piece of theater.”

Schutte recommends the show for patrons age 16 and up due to some occasional profanity.

Tickets are $15-20 in advance (students, seniors, veterans and healthcare workers are eligible for discounts) or $23 at the door if available. Buy your tickets here.