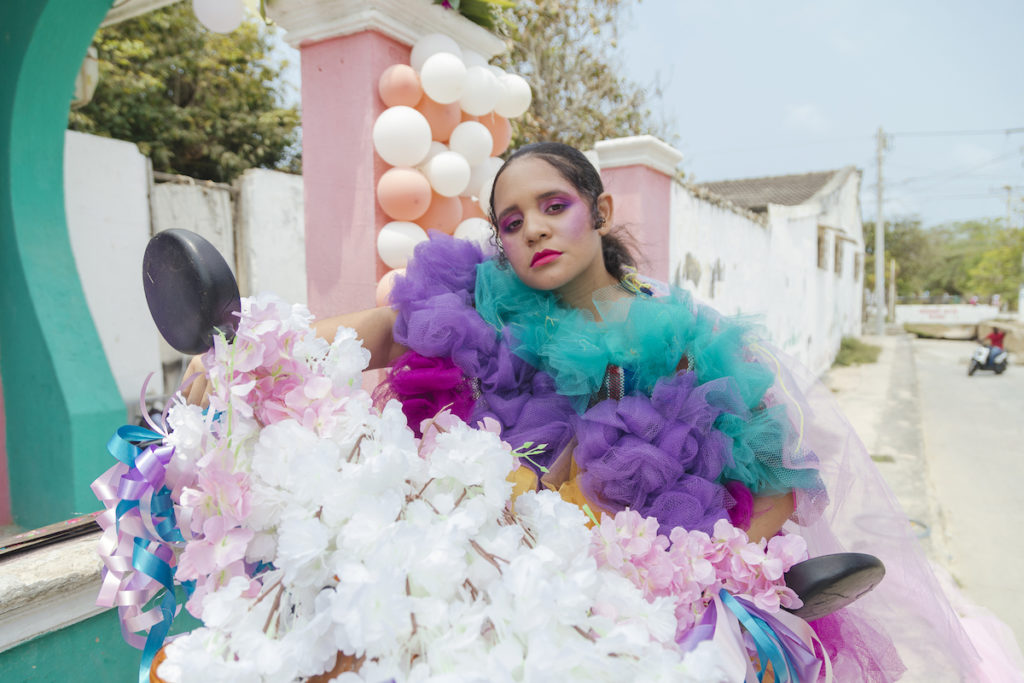 Growing up in Barranquilla, Colombia, Lido Pimienta was exposed to many sounds and experimented with them all. Provided photo

Lido Pimienta takes her audience on a journey with her through the twists and turns of her voice. Her powerful sound and forceful and yet ethereal presence on the stage pulls the audience into her world whether they are prepared or not. In her world, she is fully in command, and as she says, she is fully herself.

“You know what I want to stage. I am myself. I feel the most confident when I’m on stage,” said Pimienta. “I mean, it is so powerful, you know, it’s just like, people are quiet and they’re ready for you. And the little ones — that are just kinda like not sure… My goal is to make them weep at the end of my show. It’s like my, it’s my mission.”

And this is what the audience, coming to her show with Sylvan Esso this Tuesday at Old Forester’s Paristown Hall, can expect. The layers of Pimienta are vast. She is a tapestry of the diaspora and packs the power of those elements each time she works. Her new release, Miss Colombia bridges the gap between Cumbia music from her home country and electronic sounds. However, to leave the description at that is too simplistic. On the record, Pimienta is bold and direct and her music is, at times, confrontational. But that is the beauty of a true artist at work and truly in her element.

“You know, like, we in Colombia are already, you know, predisposed to affect and blend so much,” said Pimienta. “So when it comes to my own sound, I can think about the beat that a branch can create, you know, or when you’re like climbing up the tree. So you can take a coconut down to the stones in the river. Like, I remember making music with water and stones and like making a beat with the stones.”

Pimienta’s process is one that some of the most unique artists also employ. Any fans of Bjork, or other acts who draw on jazz, hip-hop and their indigenous roots will draw a direct line with Pimienta’s work. She is that kind of artist with a clear vision that gives us a chance to connect into a world much bigger than we think each day. She invites us to her community but on the terms she sets, often asking for space where “brown girls”  are centered.

Growing up in Barranquilla, Colombia, Pimienta was exposed to many sounds and experimented with them all. In her bio, her sister is described as being groomed to be a beauty queen while Pimienta was the “weird tomboy.”

Weirdness has a place and Pimienta has employed it finely in her music and aesthetic.

“I’ve always been experimenting. I’ve always been a dreamer. I have memories of being in the middle of my classroom and just staring at the sun and extending my arms and just like singing, you know,” she said.  “And then suddenly there’s like a burst of laughter around me because like, I was daydreaming in the middle of a lesson in school. Kids would just…people around me, they just knew like, ‘Oh, she’s a dreamer. She’s like a weird little artist’ And like, no one really took it seriously, you know? So, and I didn’t really even know that I could do something with it. I just knew that I was the girl that would sing from the house to the school and in school in the back.”

The “weird tomboy” has turned her oddities into her strengths and on Nov. 2 at 8 p.m., fans can see her open for electronic duo Sylvan Esso. This is the second time she’s supported them on their tours and she is ecstatic to get the chance to play with them again.

“They are really beautiful, dear people that have shown me so much love and support for a while,” said Pimienta. “Now, this is our second tour together. The first one was about three years ago. I was pregnant, and we toured Europe. They just always have been really nice to me. I really love and respect what they do and the way that they carry themselves. And they’re like a huge example to me when it comes to, you know, handling touring and presenting myself to the world and having my own voice and my own aesthetic, you know? They’re great people. And I feel so lucky and honored that they bring me, bring me under tour.”