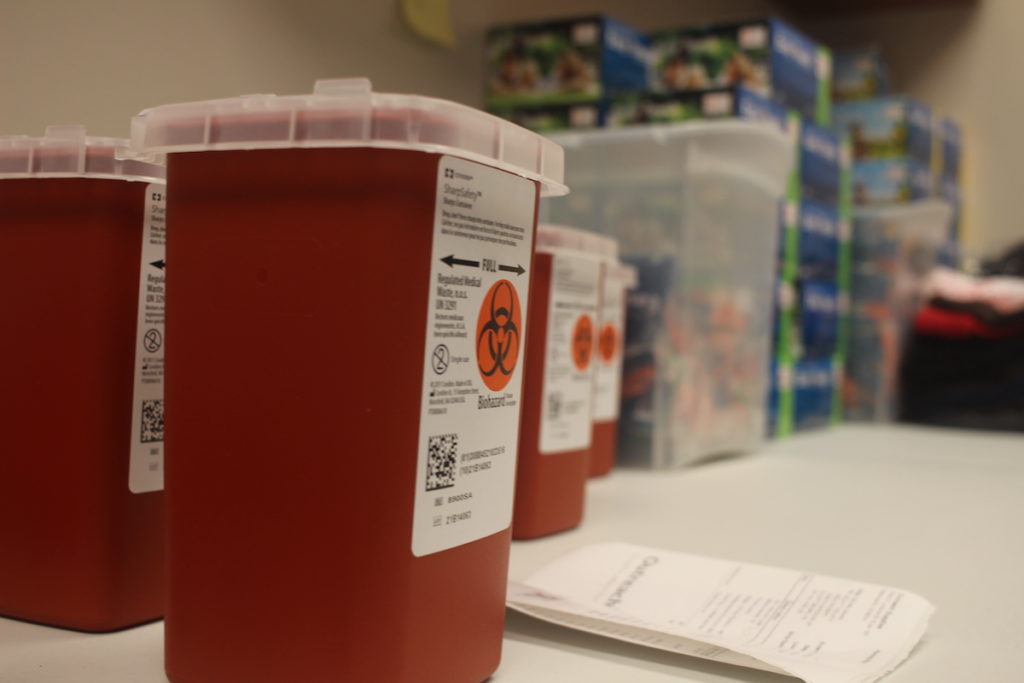 Sharps disposal containers and boxes of syringes waiting to be handed out at Austin, Indiana’s One Stop Shop, Scott County’s syringe exchange. | Photos by Josh Wood.

For hours this spring, Scott County, Indiana’s three county commissioners listened to impassioned, in-person pleas asking that they not disband the syringe exchange program, which had dramatically lowered HIV infections since the area’s well-documented 2015 public health crisis, considered one of the worst drug-related outbreaks in recent United States history.

But the appeals and arguments did little to sway two of the three commissioners, who ultimately voted to end the program.

“I know people that are alcoholics and I don’t buy them a bottle of whiskey. And I know people that want to kill theirself and I don’t buy them a bullet for their gun,” said Mike Jones, one of the two commissioners who voted against the exchange. “So I have a hard time handing a needle to somebody that I know they’re going to hurt theirself with.”

Without a syringe program, its backers feared a return to the worst in Scott County: People sharing needles, bloodborne disease rates climbing, users isolated from recovery options and syringes discarded on the street with nowhere else to safely and legally dispose of them.

Those risks were potentially avoided after the city council of Austin, Indiana, voted 3-2 on Nov. 9 to move forward on establishing a syringe program in their town, bypassing the county’s ruling after advocates lobbied them. There are still details to be worked out — and there is always the danger that the political winds will shift and council members will vote in the future to disband the program, as it happened with the county commission — but for now, there is relief among the program’s supporters.

“If the syringe service program went away, we’d start seeing more syringes in the street. I’m sure of it. We’d start seeing abscesses come back, probably the spread of HIV and Hepatitis C again. We’ve already done that experiment once. We know what happens,” said William Cooke, who was the only doctor in Austin, the town of 4,000 that was the epicenter of Scott County’s HIV outbreak that infected over 200 people and made international headlines.

Back in 2015, in charge of the biggest public health crisis he had ever faced — back before he was tapped to head the country’s COVID-19 response as vice president in 2020 — then-Gov. Mike Pence was eventually persuaded to allow a syringe exchange program in Scott County despite his initial hesitancy about the idea. To its supporters, the exchange has been a clear success — there was just one new HIV case last year, and the syringe exchange has served as a bridge between drug users and recovery programs.

But after the June 2 vote mandated that the county’s syringe program end by Jan. 1, advocates began quietly figuring out a way to secure a future for a syringe program.

Kelly Hans, who once worked for the county health department at the exchange, said she quit her job when it was clear that there was no longer going to be a program. Along with other syringe exchange advocates, she started devoting efforts to finding a workaround.

While Austin has voted to move forward on establishing its own syringe program, it is highly unlikely that one will be up and running on Jan. 1 when the county’s program ends.

With the nearest syringe exchange more than 30 miles away in Jeffersonville, Scott County advocates are worried about what the gap in services will mean.

“I think what our biggest fear is that I’m sure someone will go back to sharing their syringes again,” said Hans, who now works as a program manager at THRIVE, a recovery organization in Scott County. Hans has also founded her own nonprofit and plans to apply for it to serve as Austin’s syringe service provider when the city’s request for proposals goes out.

The end of the county’s syringe exchange will also mean that they stop servicing syringe drop-off boxes and taking in used needles. Under Indiana law, possession of a syringe used for drugs is a felony, but local law enforcement allowed syringe exchange participants to be in possession of used needles. But, with no safe way to dispose of used syringes — and the potential for underground syringe providers to move in to fill the gap — there is a worry that users will begin littering used syringes more.

According to Scott County Health Department statistics, during the six years the syringe program has been active, 92% of syringes provided to participants are ultimately returned, with 89% of returns coming from the participants themselves and 3% coming from the community.

While the goal of exchange programs is to curb disease, the effect is much more than that said Phil Stucky, THRIVE’s executive director.

“The syringe program is about lowering HIV and Hep C and infectious diseases. The added benefits of it though are the human connections that we’re making,” said Stucky.

THRIVE — which has its brochures available at the entrance of the current syringe exchange just off of I-65 in Austin — has seen more than 400 people referred to them by the program in the past 18 months alone.

Stucky knows about how difficult starting recovery can be. The former New Albany, Indiana, police officer later found himself homeless in Louisville, living in abandoned houses and under a bridge while in the grips of addiction.

“I woke up on a daily basis where I did not want to use that day, where my only goal was not to use that day. And then within an hour I was robbing, stealing, doing whatever I had to do to get more to use,” he said. His recovery was only possible, he said, “because people met me where I was at.” At THRIVE, he says, he tries to meet people where they are at and remove the barriers in the way of their recovery.

Hans has a shared goal.

“We enable people to stay alive and as healthy as they possibly can while they’re still using — and to love them,” she said of the exchange, where she still currently works as a contractor. “Sometimes we’re not very lovable people when we’re using. So we’re just that listening ear; we’re that person that they know they can come in and depend on.”

Like Stucky, Hans struggled with addiction in the past. She was in the Scott County Jail on drug charges when news of the 2015 outbreak came out. She said it was the fear of that experience that got her into recovery.

Besides handing out fresh syringes and taking in used ones, the exchange provides Narcan, tourniquets and sharps containers as well as things like winter hats, snacks and hygiene products. The exchange also provides tests for HIV and Hepatitis. The overall goal, Hans said, is reduce harm — to make using intravenous drugs as safe as possible if people are going to use them.

“We can’t recover if we’re dead,” she said. “We have to keep our people alive long enough and we have to empower them enough to know that they are worthy of recovery.”

Advocates hope to get Scottsburg, the county seat and biggest population center, to vote on a syringe exchange as well.

Cooke, who also authored a book about addiction and the HIV outbreak in Austin, said taking away a needle exchange would not stop people from using drugs.

“They don’t have to go to the syringe service program to use drugs,” said the Austin doctor. “The fact that they go there is a fact that they’re taking responsibility and making a healthy choice.”