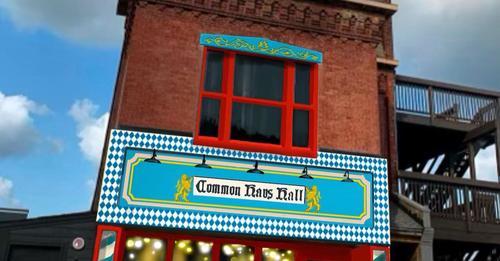 The plans for Common Haus.Photos courtesy of Pints & Union

It was late 2013 when the former Third Base Tavern, a dive bar in downtown Jeffersonville, found a new life as Big Four Burgers + Beer. When that concept finally closed, Goodwood Brewing had a brief run there as a live music venue. The old building at 134 Spring St. is about to get yet another new life as Common Haus, a sister restaurant to New Albany’s popular Pints & Union pub.

Common Haus, or Common Haus Hall, will be a German concept, complete with traditional German food and lots of German and German-style beers, plus a cocktail program. The three-story building is getting a major overhaul to transform it into a German-style beer hall, and owner Joe Phillips — who said he hopes to open the restaurant and bar in mid-December — hired chef Jonathan Exum, formerly of Jack Fry’s, Wiltshire and Proof, as head chef and the person who will shape the menu of German fare.

“German food is kind of his passion,” Phillips said, “so he was the perfect choice for this.”

The food will actually reflect a Bavarian-German style, Phillips noted, so as not to be a clone of a Hofbrau Haus location. Many of the ingredients will be sourced locally, and there will be seasonal menu shifts. And it will be decidedly Bavarian-German dishes: “We’re not going to have three different fucking hamburgers,” he said.

Phillips wants Common Haus to be a destination restaurant in downtown Jeffersonville, which already is rich with dining and drinking options. There also will be space set aside for private events, from rehearsal dinners to group outings. He wants it to be a place anyone and everyone can come to and enjoy, be it a meal, a pint or an afternoon on the deck.

“It’s an incredibly versatile space,” he told me, adding, “It’s called Common Haus because that’s what I want it to be.”

Fair enough, and it’s a noble pursuit. He said everyone from kids to your grandmother will want to be there.

“It’s going to be a lot of fun, above all things,” Phillips said.