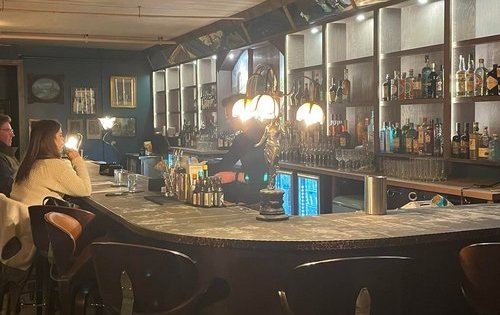 Darling's has a European theme.Photo courtesy of Dennis Humphrey

The long-planned Darling’s, a cocktail bar that features gin and gin cocktails, is now open in The Highlands.

The bar is located at 1765 Bardstown Road, which for many years was the Highlands home of Better Days Records (owner Ben Jones moved that location to 921 Barret Ave.) and is owned by Marie Zahn, James Wise, Brian Goodwin and Dennie Humphrey, who also are partners in the popular High Horse Saloon.

Humphrey is also well known as the former owner of The Monkey Wrench and co-owner of Jimmy Can’t Dance with the aforementioned team, as well as the founder of Gonzofest, the annual festival that celebrates the life and work of Hunter S. Thompson, and Grateville Dead, a tribute to the Grateful Dead.

The concept was expected to open in spring or early summer; Goodwin cited the delay as just being a “tough year to get things done,” adding that the buildout and permitting, plus managing High Horse through a pandemic, pushed the open date back.

“We were fortunate enough to not have to rush it,” he said.

And, while the cocktail menu features gin, a full range of spirits, cocktails and beers are available.

“It’s a full bar,” Goodwin said. “I think we were just intrigued by [the gin-forward approach]. Everyone is pro-bourbon, but we wanted to try something a little different. Marie likes gin as an ingredient in a cocktail and was excited to build a menu around that. I think we just wanted to do something a little fresh and different for people.”

About 10 years ago, a co-worker told Zahn, based on her gin preference, that one day she would open her own bar and call it Marie’s Gin Emporium. She said that idea never left her, so when the time came to create a concept, gin was the obvious choice for a focal point.

Asked to name the best cocktail on the menu, she points to two – Gertrude’s Gimlet and Bolo Rental – that have stuck around since the first menu was concocted. However, she declined to pick a favorite.

“I don’t want to influence anyone’s opinion,” Zahn said. “I want to see what people naturally gravitate toward.”

The bar features a European theme and features gin and gin cocktails. The entrance is now adorned by a neon, faux-vintage sign, while the sleek bar features a small lounge area, a curved, L-shaped bar that seats about 20, antique accoutrements and a bar back that features an antique mirror and twin murals.