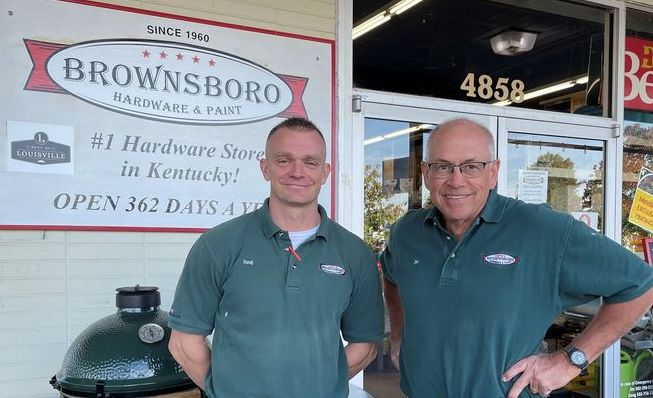 In a time when everything seems to be going corporate, Louisville is rich in local hardware stores: There’s Oscar’s in Crescent Hill and Germantown, Highview Hardware in the Highview neighborhood and, of course, Brownsboro Hardware & Paint on Brownsboro Road.

When Jim and Marilyn Lehrer decided to sell their business after 23 years, they wanted to keep up the tradition. So, despite having interest from an out-of-state buyer, they’re selling it to someone who has worked there since he was 16, store manager Doug Carroll.

“Things are going to be just as they always were,” said Jim Lehrer, in a video posted to the store’s Facebook page. “I’m excited to be here for a year to help Doug in the transition.”

Carroll added, “I just want to say my goal is to maintain the reputation and the legacy that is Brownsboro Hardware that Jim and Marilyn built. It’s an honor for me and a goal I’ve been working for my whole life. And I hope to be as good at it, if not better than you.”

And when Lehrer says that everything will stay the same, he means everything — including EGGfest, Brownsboro Hardware’s annual cooking competition and Big Green Egg grill sale.

Lehrer joked in a statement that in the year he stays on, he plans to work just 40 hours instead of his usual 60 to 70.

Carroll cracked one at the end of the video, too, “Now, we’ve got things to do,” he said, addressing Lehrer, “So go sweep the floors.”

You don’t hear rapport like that when you buy from Amazon.