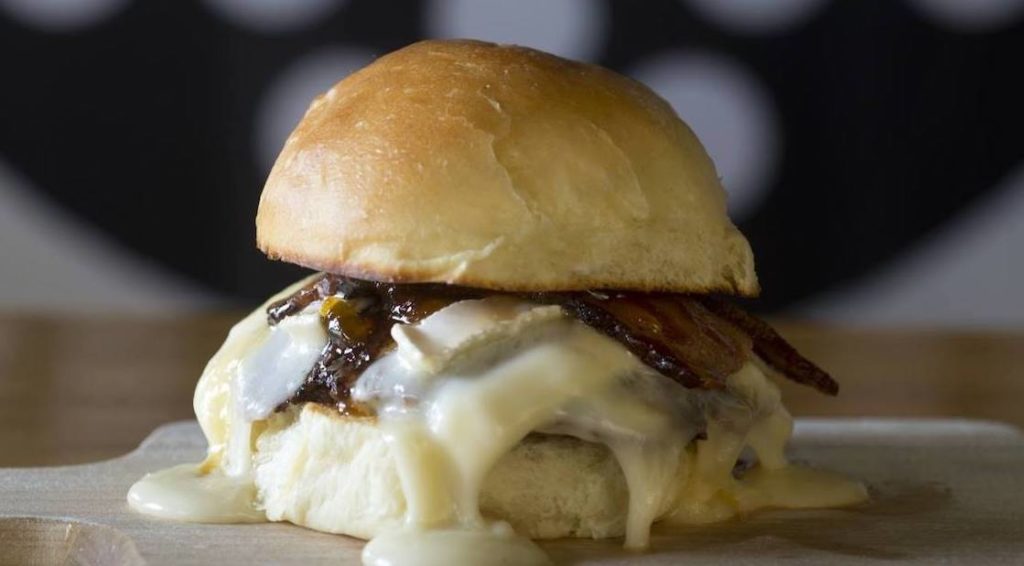 You can eat more burgers that look this delicious now that Grind Burger Kitchen is reopen. Photo courtesy of Grind

The popular burger restaurant Grind Burger Kitchen reopened this past Friday, Nov. 5, after a two-month closure.

The NuLu restaurant, whose acclaim includes a feature on Guy Fieri’s “Diner’s, Drive-Ins and Dives,” closed temporarily on Sept. 7, as its owners, Liz and Jesse Huot, announced in a Facebook post.

Although the closure ended up lasting longer than a few weeks, Grind is now back up and running.

“The past year and a half has been really stressful for anybody that owns a restaurant or works in a restaurant or works in the hospitality industry,” Liz Huot told LEO. “We kind of just all looked at each other, and we were like, ‘This is exhausting. Can we take a break? Let’s take a break.’ And we were in a financial position that we could do that. It was an opportunity for us to focus on being able to get some of those [renovation] projects done.”

The numerous  renovations at Grind included a “cool, updated bar,” according to a Facebook post, plus a new ceiling. But the Huots say that those were secondary to the wellbeing of the staff. In fact, they told LEO, they’re considering doing another month-long closure every year from now on as a way to give their staff –– and themselves –– a break. (Grind employees were able to keep earning a living during the closure by cross-training and working at two other restaurants that the Huots own. A few chose to take the time off; a few quit, but most stayed.)

What Jesse Huot wishes more people would understand, though, is, “We didn’t close for you. We didn’t close to renovate the whole place and make it look like Disney World.”

“We had somebody come into Grind, and with a grumpy face, look around, like, “They didn’t need to close two months for this!’”

“We did this for the staff,” said Jesse Huot, “mostly to have a place to show up to every day that’s more inspiring than just a place that’s been through hell for two years. It’s kind of a refresher for everybody.”

The Huots’ two other restaurants are a Scandinavian-American fusion restaurant called Oskar’s Slider Bar and Smør Nordic Bakeri. According to a recent announcement on the Facebook page for Oskar’s, the restaurant will be closed “for the next few weeks to attend to some plumbing and bar top issues we have had since opening,” but it will reopen on Dec. 5 to celebrate its four-year anniversary.

CORRECTION: A previous version of this story misspelled the name of one of the Huots’ businesses, Smør Nordic Bakeri