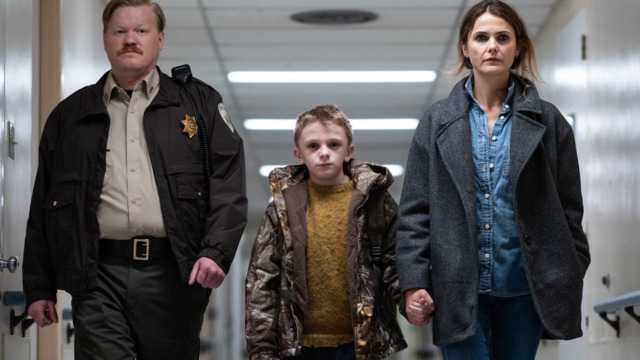 Sheriff Paul (Jesse Plemons, left), Lucas (Jeremy T. Thomas) and Julia (Keri Russell) have no idea yet of the horrors that await them all in "Antlers"Kimberly French/20th Century Studios

Here’s a little story to show how we never truly know the potential within the people who rotate in and out of our lives.

You see, I went to college for a spell with Scott Cooper, the Virginia-born director of “Crazy Heart” and “Black Mass.”

We called him “Coop” back then. We weren’t the best of friends, but we were friendly, as friendly as 18-year-olds let loose on their own for the first time in their lives can be.

We didn’t get to have the kind of in-depth conversations that are only possible later in life, after you’ve finally started to put the pieces together. I doubt he knew about my deep love for cinema, and I had no idea that his career path would put him behind a camera directing some of the greatest actors of our generation.

Yet, here we are, more than 30 years removed from that patch of cow pasture we called our college stomping ground in 1988, and I’m about to tell you how, if you’re a horror fan, you absolutely must see his newest movie in a dark theater.

“Antlers” is one of the best original creature features in recent memory, and it’s the first worthwhile depiction of a mythical beast from Native American lore, which I shall not name so as not to ruin the surprise.

It’s OK if you’re not familiar with “Antlers.” Given the past two years, with a ravaging pandemic and continued social unrest, it’s fair to say that a gory-good horror movie about cannibalism set in a rural community in Oregon decimated by lost work and methamphetamine might not be the first thing you think of to watch.

But way back in February 2020, which feels like a lifetime ago, I actually gave notice that “Antlers” could be one of the best upcoming releases of the year when it was originally set to bow that April.

“Antlers,” which Cooper co-wrote with Nick Antosca and Henry Chaisson, is even better than I ever hoped. Produced in part by Guillermo del Toro and David S. Goyer, the film tells the sad tale of Lucas Weaver (Jeremy T. Thomas), whose teacher Julia (Keri Russell) begins to suspect may not be doing well at home, which is an understatement, to say the least.

Julia isn’t quite well herself. She’s returned home to Oregon to live with her brother Paul (Jesse Plemons), the local sheriff, but neither of them has quite figured out how to leave their own turbulent childhood of abuse in the past.

“Antlers” opens with an indigenous eulogy, of sorts, for the planet Earth, and a warning that nature when threatened with abuse will unleash its most malevolent spirit, an all-consuming, shapeshifting, flesh-eating ravager, to lay claim to your soul.

Cooper takes his time with the story, allowing the bleak existence that Julia, Paul and others endure to sink in, and he uses poetic visuals, a long line outside the methadone clinic next door to the local ice cream shop, to drive home his point.

But once “Antlers” kicks into high gear, there’s no denying just how exceptional of a chilling allegory this film is.

The practical and visual effects are among some of the best you’ve ever seen, and there’s one sequence in particular that I would place up near the full-body transformation from “An American Werewolf in London,” which is high fucking praise.

Even the throwaway details, the way that the malevolent spirit converts its human cargo into human kilns, cooking up a terrible, insidious beast inside, are staggering in their execution.

“Antlers” is brutal and blistering. It pulls no punches depicting the ways we hurt others and ourselves and it gives zero shits about our frail human failings.

For every bludgeoning body blow or visceral blast of gore, Cooper pauses long enough to let you look in whimpering wonder at the magnificent creature at his movie’s core.

To that end, “Antlers” is a masterwork of patience and reward, and hands down one of the best movies you will see this year.