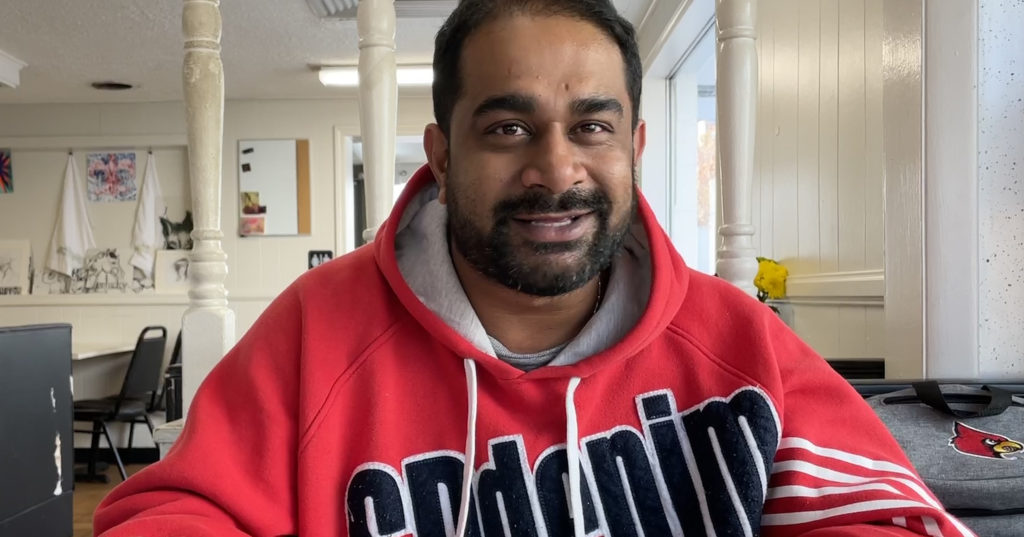 Gibin George, UofL MBA and owner/chef at D. Nalley's Diner, sat down to talk with us about supply chain and labor issues in the second year of the pandemic.

Imagine yourself as the owner and cook at a popular short-order diner. Suddenly you look around and discover that the price of your cooking oil has tripled, and you can’t buy biscuits for love or money.

Those challenges make things tough when your customers are looking for breakfast all day and the many fried delights that make diner fare so delicious. And that’s just the beginning, says Gibin George, owner and chef at D. Nalley’s Diner.

“In the last few months,” he said in an extended interview that started via email and continued face-to-face, “We have had several items that we regularly buy at major vendors like Restaurant Depot, Sysco, GFS not being available. The items vary from paper products like to-go boxes and wrapped straws to consumable products like onion rings and liquid eggs. They’re out of stock on a lot of things.”

He’s not blaming his friends at the restaurant supply shops. “All these places are completely out. Restaurant Depot is close to us. I’m there every day. Their manager, Daniel, is trying hard. It’s not his fault, but lack of employees and lack of product, and when it’s gone, it’s gone for weeks, and there’s nothing we can do except look outside the box.”

Supply issues have gotten so complicated, he added, that he’s had to turn to Amazon Prime for several products. “We used to do the biscuits,” he said. “We’re an old-school American diner, with inexpensive food. But now chicken has doubled in price. A 35-pound container of cooking oil has gone from $15 to $45, and big 20-pound rolls of beef have increased four times.”

George brings an unexpected set of management tools as a diner owner trying to thrive during a worldwide pandemic. Migrating with his family from New Delhi, India, in 2007, when he was just 17, he headed straight for UofL. He completed his bachelor’s degree in business and then want on to complete his M.B.A. from UofL’s graduate College of Business. He’s such a big UofL fan that he has repainted the exterior of his building at 970 S. Third St. bright, bold Cardinal red and black.

That sounds like a pathway to corporate stardom or maybe hedge-fund management. But George went in a different direction: He set his sights on restaurant management when he fell into an opportunity at another long-running diner.

“In 2015, the owner of Twig & Leaf, my friend’s cousin, invited me to come take a look at the Twig. I sat there for a month, then said I’d take it over as co-owner. Twig was going through some rough times then. It was the only 24/7 place in town, but competition from chains had cut into their business. I owned it for three years and did great.”

But eventually, he said, he and his friend and partner didn’t see eye to eye on some management issues. Then another opportunity came up: Some regular customers at D. Nalley’s approached him with a proposition. Darrell Nalley, the longtime owner of the 60-year-old property, wanted to retire. George took on ownership of the business. Nalley remains owner of the building and its property.

That front door sees plenty of traffic, lured by a traditional diner menu with every single dish priced at $7.95 or under except for his popular international specials with entrees like chicken shawarma, chicken curry fried rice, veggie fried rice, deviled chicken livers and wait for it… Makaroni Po Flotski, Russian navy style ground-beef macaroni. All these culinary delights go for $8.99 or $9.99.

George is proud that the restaurant stayed open, serving customers safely with masks and social distancing throughout the pandemic. The doors closed to indoor dining only during the three months (March 16-May 22 and Nov. 20-Dec. 13, 2020) when Gov. Andy Beshear ordered all the state’s restaurants closed to dine-in traffic because of Covid-19 surges.

“Except for mandatory dining-in closing, we stayed open,” George said. “And during the closing, some customers said, ‘Stay open, we’ll pay the fine.’”he added with a smile.

But supply prices are rising dramatically: “Being a diner, whose prices are low,” he said, “seeing product costs reaching new high has put us in a situation where we are now having to increase prices.

“Being an employee in the restaurant industry, I do understand why people are asking for higher wages. A server makes $2.13 per hour plus tips. Even though at the end of the day most of our servers clock close to $15 an hour with tips, I do understand why they are asking for higher wages. Not everyone tips decently, let alone well. But here is my question, if there is an increase in wages to say state minimum would these servers be okay losing their tips? Or would the customers be willing to pay higher prices for products?”

George is philosophical about all this, and he’s not leaving the business he loves. “I have faith that this year will be better. I’ve met people who had their first dates here, they keep coming back.” His most faithful customer, a guy named Jerry, is 89, and has been a regular at D. Nalley’s for 50 years.

“I don’t see myself working at another restaurant,” George said. “I don’t see not being at this restaurant.  Five years from now I’ll probably be here.”