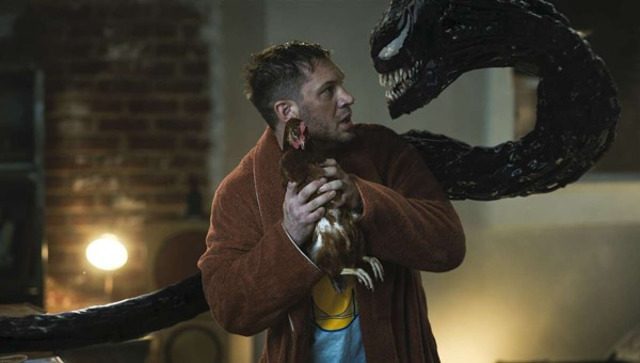 Tom Hardy in "Venom: Let There be Carnage." | Photo via Sony Pictures

“Venom,” the 2018 Tom Hardy vehicle about an alien organism called a symbiote that bonded with a human being, creating the titular lethal protector, was a stinker of epic proportions: wildly internally inconsistent, miscast, unfunny, etc. It was a superhero movie, though, and managed to rake in more than $200 million at the domestic box office, one of only 13 films to do so in 2018. Naturally, a sequel was greenlit.

Hardy’s Eddie Brock and his muscly altar-ego return in “Venom: Let There be Carnage,” is a vast improvement on the original, though still nothing special.

This time under the direction of Andy Serkis, the film divines a reservoir of slapstick physical comedy in the Brock-Venom relationship. The man and the alien occupy the same body and bicker constantly about food and violence and the boundaries of permissible behavior in polite society. Hardy, who also voices Venom, seems to settle into this register comfortably — he and his New York accent were all over the map in the first — though the zany tone abuts unevenly with the film’s villain, a many-tentacled CGI monstrosity, and its main action set pieces.

The first film, incidentally, was one of the least realistic depictions of professional journalism I’d ever seen. This one’s not much better. Brock has transitioned from video journalism to freelance print work. He publishes irregularly, a crime story here, a serial killer blog post there, while still managing to pay rent on his chic San Francisco studio apartment. Imagine!

For reasons poorly explained, a criminal on death row named Cletus Kasady (Woody Harrelson), whose traumatic backstory is briefly illustrated in a pre-credit scene, wants to tell his story to Brock, and, through Brock, hopes to send a message to a former love, Frances Barrison (Naomie Harris), who has been secretly institutionalized for decades due to some sort of mutant screeching ability which I still don’t fully understand.

After a short interview, Brock manages to solve a few murders with Venom’s help. The murders are attributed to Kasady, after which Kasady’s death sentence is immediately enacted — capital punishment of course being a famously efficient process — but not before Kasady sees Brock one last time.

In a bizarre scene, he bites Brock, licks up some of his symbiotic blood, and acquires an alien altar ego of his own, in which form he hideously defeats his lethal injection. Kasady announces that this new creature will be named Carnage.

Kasady-Carnage then rescue Frances Barrison and wreak all manner of havoc en route to a long-overdue wedding, at which they intend to exact some long-overdue revenge. Brock reunites with his ex, Amy (Michelle Williams) and her fiancé, Dr. Dan (Reid Scott), to thwart these designs.

The script — both at the story and the line level — is the weak link here, chock full of eye-roll-inducing developments, one-liners and basic misapprehensions about how the world works. At only 80 minutes and change, there’s not much meat on these narrative bones, either. It’s also just difficult to reconcile the goofball slapstick stuff with Carnage himself, who’s disgusting to look at and the extent of whose powers remain unclear. (This dynamic compares unfavorably to the summer gorefest Suicide Squad, which as a reboot adjusted its tone and made comedy out of over-the-top violence. Its final boss was a giant pink starfish.)

The original “Venom” also was very much a San Francisco film. Its villain, Carlton Drake (Riz Ahmed) was an ethically bankrupt tech billionaire pushing the limits of scientific innovation. The whole point of trying to bond symbiotes with humans was so that humans could survive in outer space. He was an Elon Musk psycho, and there’d be no shortage of opportunities for additional villains from that milieu. That’d be great.

Instead, the screenwriters go generic — I have to assume these are faithful adaptations of the Venom comics? — with a mentally unwell criminal from some haunted-house orphanage. The final confrontation is at a spooky cathedral under construction. It all feels much more like Gotham City than Golden City.

The cast, however, in spite of these shortcomings, is largely strong. With a better storyline and a more assured creative team, one can see the potential for more enjoyable installments in the “Venom” universe.

“Venom: Let There be Carnage” opens Friday in wide release.