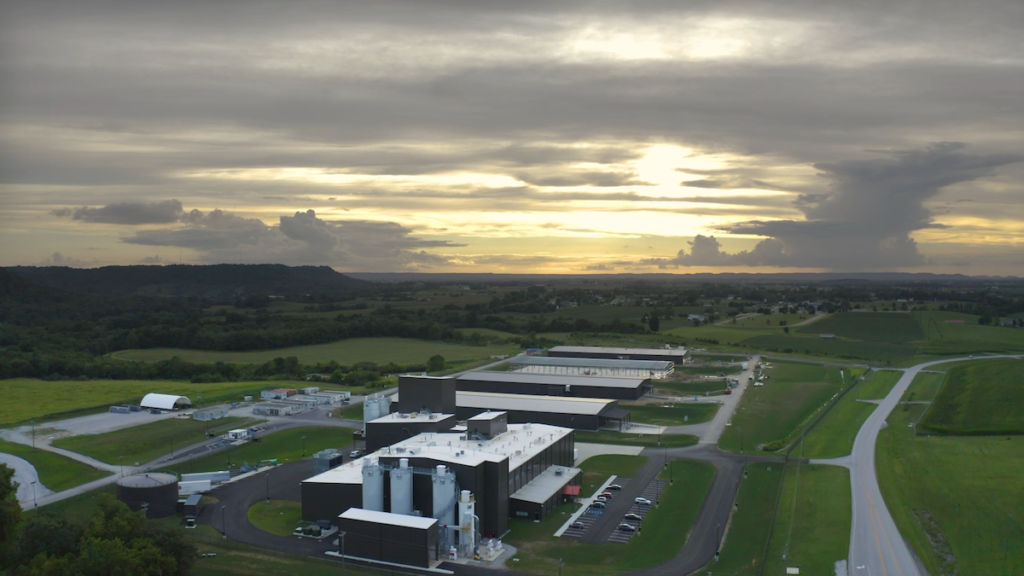 The new Diageo distillery in Lebanon is powered by solar and wind energy. | Photos courtesy of Diageo

The Bulleit Bourbon flowing from a new distillery in Lebanon, Kentucky, will come without the usual shot of fossil fuels.

Bulleit’s parent company Diageo has just opened its first carbon neutral distillery about an hour and a half from Louisville.

To avoid producing carbon emissions, the distillery will make its alcohol — primarily Bulleit Bourbon — with electrode boilers, powered by 100% renewable electricity, including wind and solar. The distillery’s onsite electric vehicles and internal and external lighting and equipment will also run on clean energy.

Without these and other measures, the distillery would have generated 117,000 metric tons of carbon emissions annually, or the equivalent of what 25,000 cars typically generate in a year.

This isn’t a one-off project for Diageo. The company, which also owns Smirnoff, Captain Morgan and Crown Royal among other brands, has set a goal of hitting net-zero carbon emissions across its direct operations by 2030 — and throughout its entire supply chain by 2050 or sooner.

In addition to the new renewable energy the new distillery will use, it’s also implemented virtual metering technology to collect data about its water, electricity and steam usage. The distillery plans to use that information to increase its efficiency and sustainability.

“Two years ago, we set a vision and commitment to build our first carbon neutral distillery in North America. Now that the Diageo Lebanon Distillery is operational, I’m incredibly proud of the innovative actions from our teams and partners to fully electrify the facilities and power them with renewable electricity. This is a significant step in our journey to create a low carbon future and be part of the solution to tackle the ongoing climate crisis,” said Perry Jones, president of North America Supply for Diageo, in a statement.