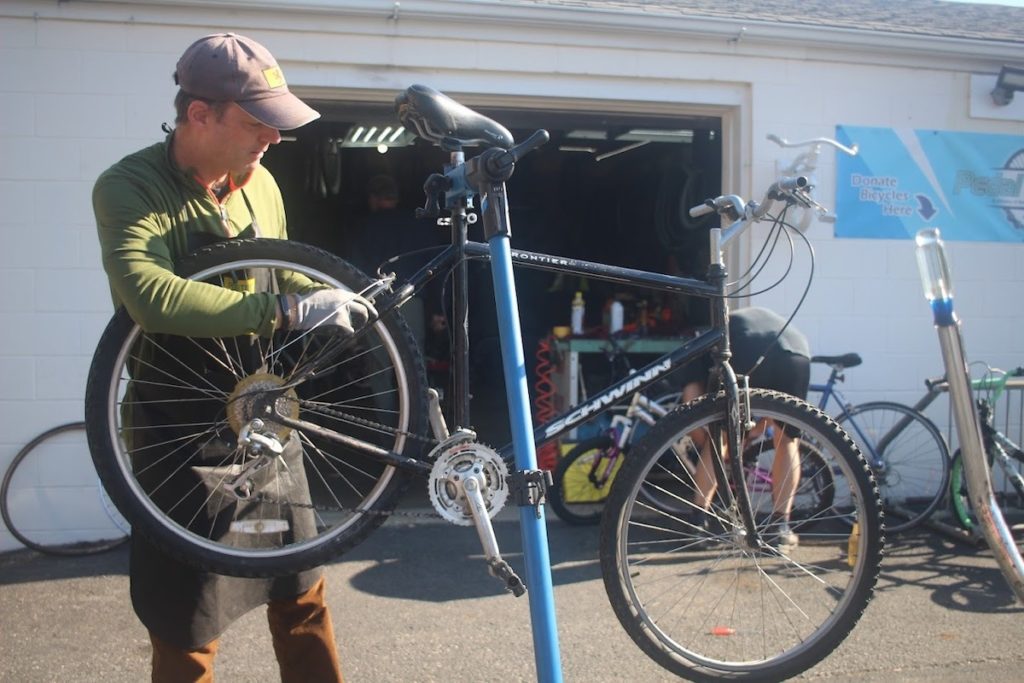 Volunteer Chapin Collins repairs a bike at the Pedal Power garage at the Beargrass Christian Church in St. Matthews. | Photo by Josh Wood

It’s a sunny Wednesday morning, and the garage in the Beargrass Christian Church’s unassuming parking lot is bustling with activity as people shuffle in and out to get parts and tools for the bicycles they are fixing.

“So who knows how to adjust brakes?” calls out volunteer Chapin Collins, as he repairs a Schwinn mounted on a brace.

An SUV pulls up, towing a flat-bed trailer loaded down with bikes — bikes recovered by the police that weren’t claimed and are now being donated — giving the crew even more bikes to work on.

Every few minutes, somebody takes a bike for a spin around the church parking lot to test the repairs that have been made.

Soon, some of these bikes will be ridden by refugees who have just arrived in Louisville.

Pedal Power, as the program is called, has been repairing and then gifting bikes for nearly nine years now, providing bicycles first to refugees and later to others in need in the community.

The program was born out of the hardships facing refugees trying to navigate life in Louisville.

Beargrass Christian Church, where the program is headquartered, has long sponsored refugees arriving in Louisville. They used to provide refugees with bus passes to get around, but found that was not really a perfect fit for new arrivals in a foreign land.

As more and more people started donating the old, unused bikes they had tucked away in their garages and basements, the popularity of the program snowballed.

While they take children’s bikes, the main goal of the program has remained focused on getting bikes to adults who need them for basic transportation to take care of themselves and their families.

“The ones we like the best is you put air in them, and they’re ready to go,” says Callander of donations they receive. “Then the next category are the bikes that need brake adjustments, new tires, maybe some brake cables, a seat, a pedal. Those take maybe 30 minutes.”

They will do work on bikes that require more extensive repairs, but only if it’s a “quality bike.” Otherwise, they cannibalize it for parts and send the rest of it off to recycling. (The program also purchases parts needed for repairs with money from occasionally repairing and selling nice bikes that they come in possession of.)

Like other groups that assist refugees, Pedal Power has been gearing up for the arrival of Afghan refugees after tens of thousands arrived in the United States following the fall of Kabul in August.

When LEO visited, Pedal Power had 30 bikes ready to hand over to Kentucky Refugee Ministries, that day, for Afghan refugees.

Up to 350 Afghan refugees will be resettled in Louisville. As of Friday, 24 had arrived according to the Kentucky Office for Refugees, the nonprofit arm that manages refugee resettlement in the commonwealth.

Pedal Power is planning on donating the majority of the bikes they are working on now to Afghan refugees.

Prior to the Trump administration, Callander says, 90% of Pedal Power’s bikes went to refugees. But, as Donald Trump capped refugee admissions to record lows — allowing just 18,000 for 2020, down from a limit of 110,000 set at the end of the Obama administration — fewer refugees arrived in Louisville.

Pedal Power switched gears and started donating bikes to local groups — including those helping the homeless, community ministries, St. Vincent De Paul and the YMCA. Over the Trump years, refugees received just 20% of the bikes refurbished by Pedal Power.

Their location right next to the entrance to the St. Matthews Farmers Market — which runs on Saturdays from May to September in the Beargrass Christian Church’s parking lot — has helped Pedal Power gain donated bikes as well as volunteers.

Collins, 52, discovered Pedal Power after he researched donating some old bikes in his garage to the mostly Latino workforce on the Backside of Churchill Downs. By doing a bit of Googling, he found out that the Backside Learning Center — which provides bicycles to those workers — received bikes from Pedal Power. He’s now been volunteering at Pedal Power for a couple of months.

“Rather than sit on some board and come up with ideas and help raise money, I figured I’d do something that a whole lot of people can’t do,” he said. “That’s why I’m here.”

If you want to donate a bicycle to Pedal Power, they can be left anytime at the bike rack outside their garage in the parking lot of the Beargrass Christian Church — 4100 Shelbyville Road.