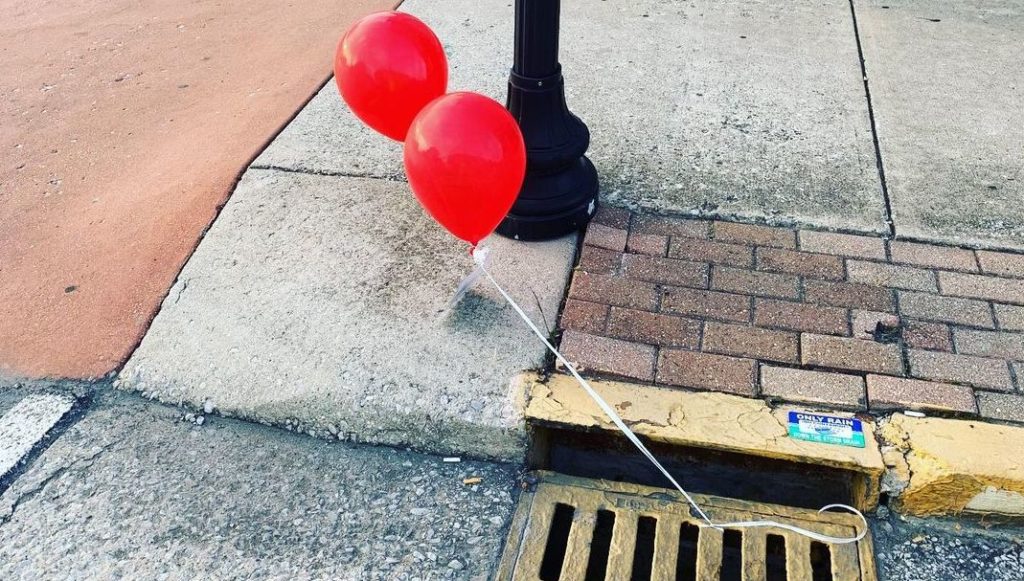 If you see a gaggle of red balloons attached to a sewer grate in Jeffersonville this October, don’t panic. It’s not a murderous clown named Pennywise, it’s part of a coupon scavenger hunt organized by a local party store.

Horner Novelty is hiding coupons, which range from 10%-20% off, across the Southern Indiana city throughout the month. You can find out where they are by monitoring the long-time costume shop’s Facebook page. The store will post a hint — a picture or a riddle — about where the coupon will be around 15 minutes before going out to hide it. Then, once the prize is placed, another photo will be posted, revealing more about the mystery location. Each spot will be marked with red balloons, resembling those from the famous Stephen King horror story, “It.”

Madi Shipman, a store associate, thought up the idea upon seeing the store receive new balloon colors, including a familiar, red variety.

“Honestly, I just really like spooky stuff,” she said. “The color really reminded me of the balloon from ‘It.’ I started thinking up some marketing strategies that we could do.”

Shipman is the one who places the balloons and the coupons, donning a yellow raincoat like the one the character Georgie wears in “It.”

She said that she plans to hide eight more coupons before Halloween — two a week. Most of the coupons are for 10% off at Horner. But, the week before Halloween, Shipman intends to conceal two 20% coupons in more difficult-to-find spots.

So far, the two coupons Shipman has hidden have been discovered within 20 minutes — so be sure to turn on notifications for her Facebook posts, which you can find here.

Chuck Mattingly, the owner of Horner said, “I think it’s a wonderful idea, and I’m quite impressed with the thought process that went into it. And the response on Facebook has been incredible already.”