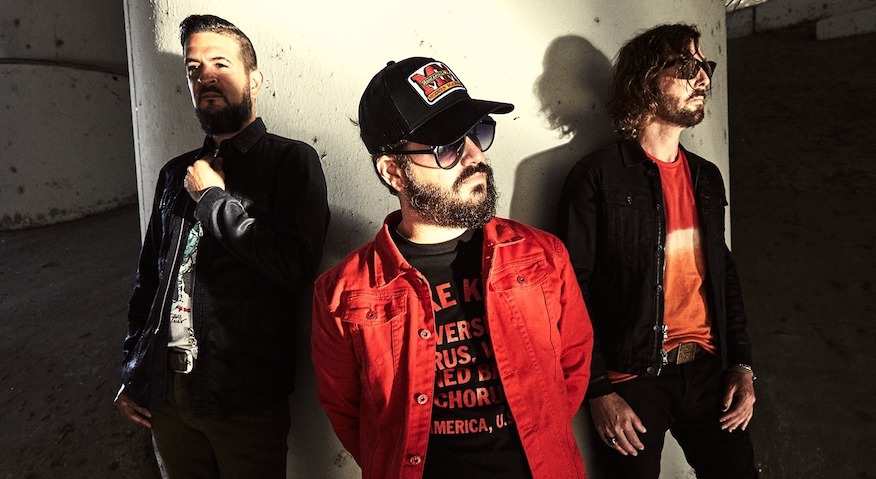 Not surprisingly, blues-powered melodies and thought-provoking lyrics abound on The Record Company’s latest release, Play Loud. Out this week on all platforms, the act’s third LP arrives a decade into a still rising career arc and manages to solidify the greatness that its two predecessors only hinted at. We recently caught up with frontman Chris Vos (guitar, vocals) by phone to discuss the making of the new album, his high-paying gig with Coors Light, and the current tour that lands his acclaimed ensemble, which also features Alex Stiff (bass, backing vocals) and Marc Cazorla (drums, backing vocals), at the Mercury Ballroom on Oct. 12.

LEO: When did you sense that music-making was going to be your life’s work, and what put you on this path in the first place?

Chris Vos: I’ve never had any memory of not wanting to be a musician. I feel fortunate to be able to say that because music has always been such a big part of my life, even when I was just listening to it. For as long as I can remember, I have always been curious and open to new sounds. Hearing Jimi Hendrix’s Band of Gypsys was a real turning point for me and discovering Muddy Waters’ Hard Again record was another big moment. I also enjoyed spending time with Metallica’s first four albums and absorbing all the Motown stuff that my parents had lying around the house. So, when I finally got my hands on my first guitar, which happened in eighth grade, I knew that I wanted to use it to write my own songs before I even knew how to put my fingers on the strings properly. My earliest collaborations were with my brother; I guess we thought what we were doing constituted a band, and ever since then, I have pretty much been on this path, playing with people I love. I plan to keep doing this until I fall over and perish from the earth.

Your current group has been at it a while now. How did the COVID-19 outbreak impact the band, for better or worse?

It hit us hard, like everyone else, but the Play Loud material actually came together as a direct result of having so much time on our hands for an extended period. There was literally nothing else to do but think about music. I felt like a 14 year-old kid again. It was a shitstorm, for sure. But at the very least, the shutdown allowed us to refocus our creative energies. That was the unexpected bright point in the disaster.

Let’s talk about the new record. Was there anything special for you about the writing process or the recording sessions this time around?

Absolutely. And there’s a ton I could say about all that, but I will try to keep it compact. For our first two albums, our bassist, Alex Stiff, was also our producer. That worked out well in both instances. But this time we decided to partner with Dave Sardy [best known for his efforts with Jet and Wolfmother]. We started out by writing a lot of material on our own and then bringing the demos to Dave. He immediately began inspiring us to take the songs further. I think in the past we used to worry too much about the limitations of being a three-piece and wanting to accurately replicate what we captured in the studio in a live setting. But Dave encouraged us to expand and evolve and basically to do whatever we wanted to do with this album. And we thought, ‘that’s right, why the hell not?’ Led Zeppelin I doesn’t sound like Led Zeppelin IV and that’s a good thing. With Dave’s help, we realized it’s ok to change it up as long as we can stay true to our core values as a band. And I think we did exactly that with this one.

Your version of [The O’ Jays’ song] ‘Love Train,’ was noteworthy. Has Coors Light approached you about doing any more cool covers for their commercials?

I wish they would. It sure was nice having the numbers magically multiply in our bank accounts for something that took us like 15 minutes to knock off. That was when I first came to understand that a big pay day is not necessarily tied to hard work.

You’ll be back in Louisville soon. What can we expect from the live show these days?

You can expect a loud night of rock ’n’ roll and to hear songs from all three of our albums. And I can personally guarantee that it’s gonna be fun, for us at least.

You can buy tickets to The Record Company’s upcoming Louisville show here. You can also enter to win tickets to the concert here.