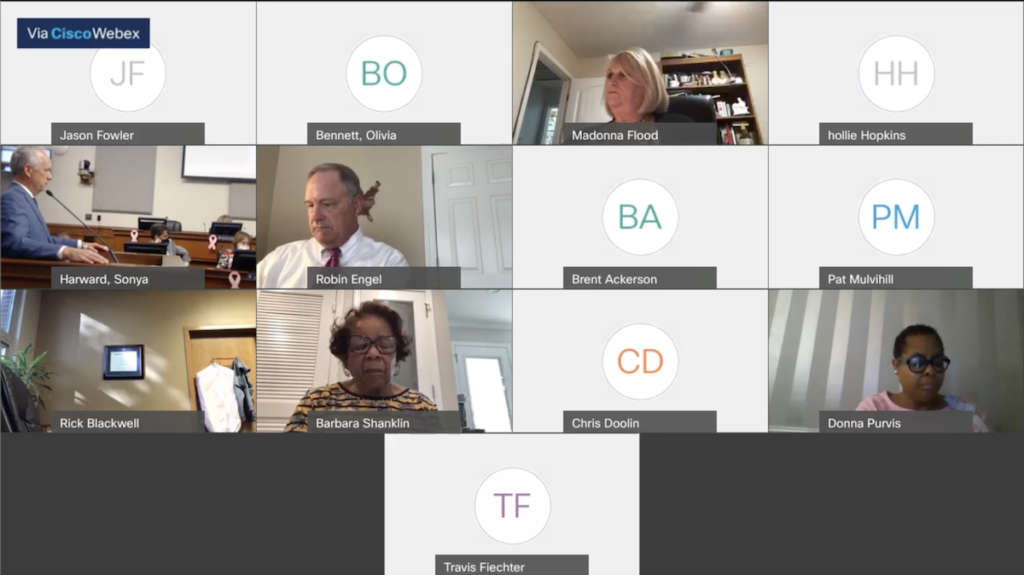 Many council members tuned in via remote chat to talk to Mayor Greg Fischer.

Under threat of subpoena, Mayor Greg Fischer made a trip to Metro Council chambers to answer questions about his administration’s response to violence in Louisville.

Council members made note of how unusual of an event Fischer’s testimony was: Those present could not remember another time it had happened since the city-county merger in 2003.

So, they took their opportunity to pepper him with questions, many of which we’re sure Louisvillians across the city share.

Here are some of their questions and Fischer’s answers.

Q: “Could you please provide some clarity around the root cause of crime based on what your administration sees on a daily basis, how you’re operating?” – Council member Jecorey Arthur

A:   “That’s where the challenge comes into play, right? Because people in our society want an answer right now. The question I ask is, why is America such an outlier when it comes to gun violence, right? We are the only country in the world that has this level of gun violence, in gun homicides. To me, it’s very simple. We have by far more guns on the streets of our country than any other country in the world. Some 350 million guns on the street. And then we have for a developed country, we have by far the biggest gap in incomes and wealth of any country that’s developed as well. So if you put together the desperation of poverty, multi generational poverty and guns in today’s world that is a super toxic combination. And that’s what’s leading to this problem that we have as a country, and in our city as well.”

Q: “Besides confiscating firearms and destroying them and holding gun owners responsible, whatever that means — common sense gun laws  — could you just break that down what that means for us in the public? If the General Assembly waved the magic wand and let us have local control, what would be some of your legislative items that you would want to see implemented here locally?” – Jecorey Arthur

A: “Lock your gun up to start off with. There should be gun locks. If you have a gun, you need to put it in a safe. If your weapon is stolen, you need to report it, and If your car is stolen you report that. If guns are confiscated, destroy them. So there needs to be some more, you know … red flag laws, you know? We need laws like this to just protect us from each other and people from doing more harm. So those are basic areas to start as the state that I think are baby steps  that are not controversial steps and in my view, it’s been difficult in Frankfort to get this done.”

Q:  “What specific meetings do you have [with JCPS], what are they focusing on and are we focusing on intel sharing [via SROs] to reduce gang activity and connecting our anti-violence programs to the kids that most need them?” – Council member Anthony Piagentini

A: “We were having quarterly meetings staff to staff, and I thought they were very useful. Now they stopped when COVID picked up, because JCPS basically went to a panic. [Superintendent] Dr. [Marty] Pollio and I talk to each other multiple times a month. Whenever our teams have needs to speak with each other, we do around this particular issue. Obviously, when you say school resource officer in this community, hackles go up on both sides of this debate. What we can all agree on is we want our kids to be safer, right? So the primary method, it looks like we’re going to be able to do that is through our Office of Safe and Healthy Neighborhoods related activity, through the GVI [group violence intervention] initiative, through our interventionists. And so we are working through that effort with JCPS now so that we can complement the information that we both have, say, for example, a student’s, parent or sibling was involved in — a victim of a homicide. Their principal and teachers need to know that, so if there’s some issue in the school that they can help that student. Likewise, if there’s a gun violent activity we need to know that. So our most recent meeting was as of yesterday with JCPS leadership on that from Dr. Pollio on down to our police department, and then our Safe and Healthy Neighborhoods team as well. And, I’m hoping that when we announce our, present to you all, our American Rescue Plan Funding ideas, you can see the synergy between LMPD and JCPS relative to helping keep our students safe. So those conversations are ongoing. More details will be presented on that toward the end of the month.”

Q:  “I know you mentioned an array of areas or opportunities that we could be scaling up … working with the state. And if we can go back to that slide, it involved things like photo arrays, the CDW’s office [Court Designated Workers], and then of course the [juvenile detention] facility itself in the East End. Can you speak a little bit about generally what what those opportunities are?” – Council member Nicole George

A: (Answered By Deputy Mayor Ellen Hessen) “I have been having some conversations with our partners at the state juvenile justice, that’s Commissioner Vicki Reed and the AOC, the Administrative Office of Courts staff, and they’re the folks responsible for court designated workers. We’ve talked to them about some issues LMPD has had getting photo arrays. I think we’ve got a training, a little bit of a training issue, and they are more than happy to continue to work with us and are also willing to provide any photos and information that are in accordance with the state statute. There’s some confidentiality rules relative to juveniles but they can certainly work with law enforcement and are happy to do that. So, we’re trying to work through where that gap is. I think some of that is just in training because there’s been a lot of turnover in all entities.

“On the court designated workers during COVID, many of those assessments were being done virtually, and that wasn’t really very good. And so that is changing. And what we’re trying to do is work through, at least in the immediacy, is to come up with dealing with the pinch points where officers are having to spend an inordinate amount of time or distance when they have a juvenile, and they’re waiting for the court designated worker to have a place to go, kind of a processing area, that we lost.

“In the meantime, we’re going to continue to work with the cabinet to advocate for an expansion of the detention center out in Eastern Jefferson County, that will be something that will have to come through the budget process and General Assembly so that will take a little bit of time, and assuming there are more funds, there would still have to be time to build out. So, in the meanwhile, we’re trying to tell us something that will take care of the most urgent of the problems.”

Q: “One of the things that I’ve heard from either retired or LMPD that I’ve spoken to or people that choose not to be identified, is that they feel as though the mayor does not have their back. Do you have the back of LMPD, sir?” – Council member Scott Reed

A:  “You know, I hear that and what does that mean? [Fischer laughs] I mean, I don’t know what means. What it means is we’ve got a good group of dedicated police officers, and when they constitutionally police, I’ve got their back. If there is bad policing going on, that’s not permissible in this city, or any city, and our citizens need to know about that. So, yeah, I’ve got, I’ve got everybody’s back when they follow the law and do the job the right way.”