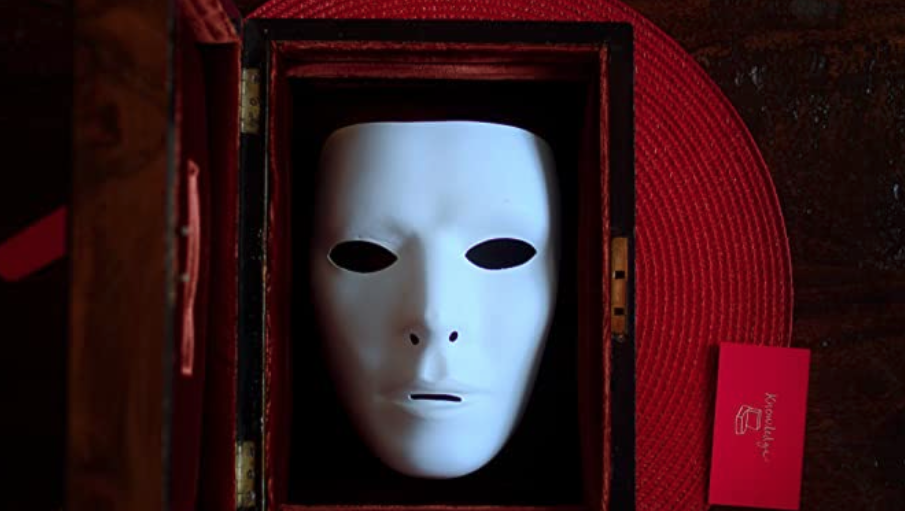 Local filmmakers Rachel Annette Helson and Josh Banks have created a spooky short film just in time for the Halloween season. Helson acted in the film, which her husband Banks wrote and directed.

The film centers around a young woman who, upon arriving home from the grocery, finds a wooden box with a red card on the front. The box contains a mask, and from there the story takes its shape.

“‘M’ came out of a desire to explore several concepts: whether fate is merely a by-product of our free will as we obsessively chase our deepest desires, how trying to escape from our past without reflecting on how we got there causes us to make the same mistakes over and over and how the masks we wear cause us to not be able to recognize ourselves,” said Banks in an email to LEO. “The horror genre is a wonderful medium through which to have these universal experiential discussions with an audience.”

Helson is a Louisville native who spends her time with Banks between Louisville and New York City. Her acting credits include spots in TV shows, “The Knick,” “Law and Order: SVU” and “Power.” She can also be seen in the Netflix comedy “The Polka King.” Helson graduated from New York University’s Tisch School of the Arts, studying at the Stella Adler Studio of Acting and Stonestreet Studios. Helson also is the youngest producer in Broadway history to be nominated for a Tony Award.

​​Banks has acted in many television shows including “The Bourne Legacy,” the Netflix production, “Bloodlines,” and “Law and Order: SVU.”

Their film “M” was shot locally in Louisville and has been chosen for release online with Omeleto, a site with over 3 million subscribers. The film has also been chosen as an official selection of Flickers’ Rhode Island International Film Festival and also as a Daily Short Pick by Film Shortage.

Here are the other credits for the project:

You can watch the film below.