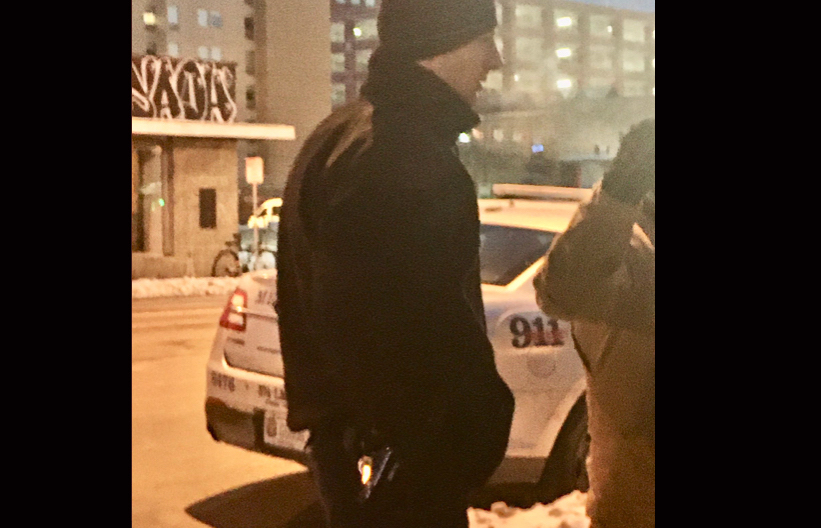 The LMPD officer who was temporarily suspended for marching in uniform outside of Louisville’s abortion clinic is now suing the police department and the city, claiming his First Amendment rights were violated.

Officer Matthew Schrenger said he was walking and praying quietly, not protesting when he parked his police car near the EMW Women’s Surgical Center on the morning of Feb. 20 before his shift and proceeded to walk the sidewalk outside of the clinic with his father.

Schrenger and his father alternated wearing a 40 Days for Life sign, a religious campaign to end abortion through 40 days of “vigils” outside of abortion facilities. The group boasts about “results” on its website, claiming credit for closing 114 abortion centers.

40 Days For Life says on its website that its presence outside of clinics is “peaceful.” EMW clinic staff said that Schrenger intimidated them and their patients, according to WDRB.

The lawsuit, which was filed on Monday in the United States District Court for the Western District of Kentucky, says that LMPD wrongly accused Schrenger of violating LMPD standard operating procedures and state law. Schrenger’s suspension was lifted in June, with LMPD Chief Erika Shields writing a letter to him saying that she could not substantiate allegations against Schrenger because rules on officers participating in political activities while in uniform have been enforced sporadically. In the letter, originally reported on by the Courier Journal and WDRB, she also said that while Schrenger was clearly participating in a protest, he had obscured his uniform with a coat. Shields announced she’d be adding participating in “religious controversies” to the department’s policy.

In Schrenger’s lawsuit, he claims that LMPD officers have marched in uniform at an LGBTQ+ parade and in Black Lives Matter protests.

“It is readily apparent that LMPD’s actions against Schrenger were not due to some purported violation of the SOPs, but was retaliation and discrimination because of his prayer and sincerely held religious beliefs,” states the lawsuit.

Schrenger is asking for a trial by jury, and he is suing for damages, attorney fees and back and front pay. He claims that his First Amendment right to free speech and free exercise of religion were violated, among other constitutional rights.

Schrenger also claims that LMPD “deliberately” extended his suspension period. According to the lawsuit, Schrenger wasn’t interviewed about the incident until March 18, and it took until June 15 for Shields to inform him, via mail, that “none of the allegations against him had been sustained.”