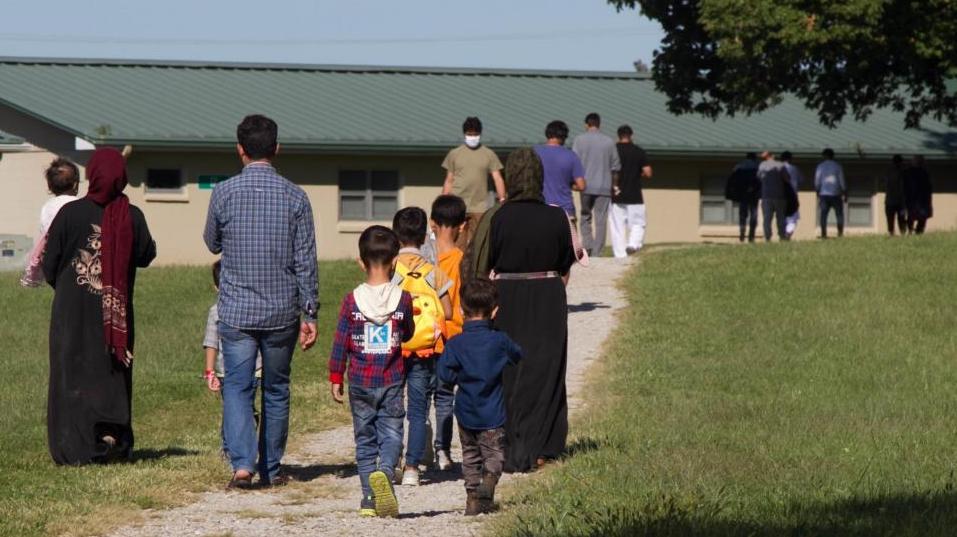 Nearly two months after the sudden fall of Kabul — which saw tens of thousands of Afghans evacuated during the chaotic final moments of America’s 20-year war — Kentucky and other states are still waiting to resettle the vast majority of refugees currently living on military bases across the United States.

Kentucky is slated to receive up to 850 Afghan refugees, according to the Kentucky Office for Refugees, the nonprofit that manages Kentucky’s resettlement program. Louisville will take in up to 350. So far, out of those numbers, only one Afghan refugee has arrived in Louisville, and four have arrived elsewhere in the state, according to Becky Jordan, director of the Kentucky Office for Refugees and the state’s refugee coordinator.

Jordan said she does not anticipate refugees to arrive in “a regular kind of flow.” But she does expect the number of Afghans arriving in Kentucky to ramp up in the coming weeks and months.

When exactly Kentucky’s newest residents will arrive is still up in the air. The Department of Homeland Security, which is overseeing the nationwide resettlement of more than 50,000 Afghans currently housed at eight bases across the country, has yet to set out a clear timeline.

Eighty miles north of Louisville in the small town of Edinburgh, Indiana, 6,500 Afghans who were evacuated from their country are being housed at the Indiana National Guard’s Camp Atterbury base while they go through the federal resettlement process.

Afghans are free to leave the bases they are housed on before the resettlement process is completed, but by doing so may forfeit aid and benefits, according to reporting by Reuters.

“Many of the Afghans may have family in other locations across the country and they’ll try to do their best to send them there,” Jordan said, mentioning sizable Afghan populations in California, Virginia and Texas.

Louisville has a relatively small Afghan population by comparison — about 40 families, according to Colin Triplett, director of migration and resettlement services at Catholic Charities of Louisville. The Kentucky Office for Refugees is a department of the nonprofit.

But despite the uncertainties, local groups have continued to lay the groundwork for the arrival of new refugees.

In Louisville, Catholic Charities and Kentucky Refugee Ministries will handle the resettlement of refugees.

When they arrive in Louisville, Jordan said, refugees can expect to be picked up at the airport by agencies before being brought to a provided apartment already stocked with food, furniture and household supplies. In the weeks following their arrival, agencies guide newly arrived refugees through a slew of appointments to start their new lives in the U.S.. Refugees also receive cash assistance, English language training and help with finding employment.

“Currently, right now, there are more jobs out there than there are refugees. So there’s a lot of calls from employers wanting employees, wanting refugees to come work for them,” Jordan said.

Most Afghans arrived in the U.S. under the system of “humanitarian parole” which expedited their entry but limited their access to government cash and housing assistance to just 90 days. However, legislation passed by Congress last month ensures Afghans will receive the same longer-term benefits that persons entering the country classified as refugees do.

That legislation took some of the burden off of resettlement agencies — which disperse federal aid — but they are still taking donations of cash and items to help refugees arriving in Louisville. Among the top items requested by Catholic Charities: Bed sheets, blankets, (new) personal hygiene products, (new) cleaning items, coffee tables, end tables, kitchen tables, dining room tables, chairs and lamps. Among items  not accepted are clothing, mattresses, wardrobes and large appliances.

Some Afghans have entered the U.S. on special immigrant visas, which can be granted to persons who worked with the U.S. military or government.

According to data from the U.S. Department of State, Kentucky received more than 650 refugees in the past year, mostly from the Democratic Republic of Congo. Only California, New York and Texas have taken in more refugees during that timeframe.

Jordan credited Louisville’s place among the top refugee-receiving states in recent years as a result of its established Congolese population attracting other refugees from the Democratic Republic of Congo.

Triplett said the cost of living, the ease of getting around and the availability of jobs  makes Louisville an attractive destination to refugees.

“Louisville is a really welcoming city, we have relatively low, relatively affordable housing and employment is amazing here,” he said. Refugees “especially if they moved to Louisville from another part of the country, they like to extol the virtues of how great it is to live in Kentucky and in Louisville. They do like living here,” he added.