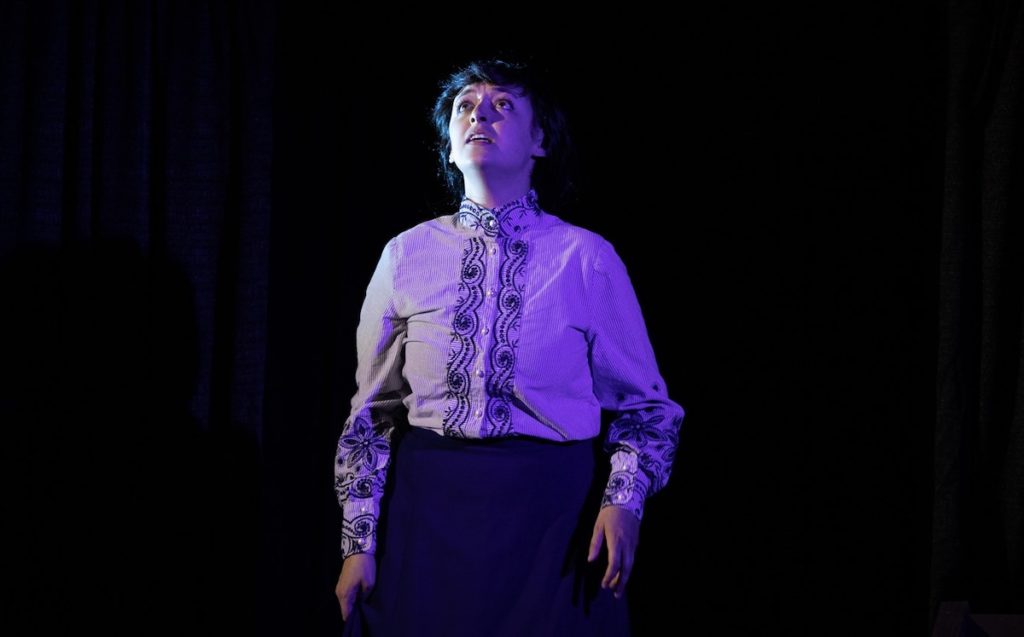 In "The Turn of the Screw," Mollie Murk’s performance is a finely honed descent from sunny optimism through twilight into darkness. | Photo by Billy Brymer for Kentucky Shakespeare

A year ago, on chilly fall nights during the depth of the COVID lockdown, Kentucky Shakespeare staged a drive-in production of “Macbeth” that used the dark mystery of October nights and the crackle of lo-fi, low-power car radio signals to heighten the grim, powerful majesty of the play.

Over the summer, the company offered a grand, triumphant summer season. And now, as audiences gingerly return to indoor theater, the company has unveiled a new rehearsal/production/performance space a block away from Central Park with a production of what is widely considered the greatest ghost story every written, Henry James’ “The Turn of the Screw” as adapted for the stage in 1996 by Jeffrey Hatcher.

For over 120 years “The Turn of the Screw” has fascinated readers, critics, and scholars to the point where there have been decades-long scholarly debates among factions with nicknames like “apparitionists” (who argue that the ghosts in the play are “real”) and “hallucinationists” (who argue that they are fabrications of the unsound mind of the observer).  It’s a story that has inspired feminist thinkers, psychoanalysts, literary critics, child psychologists, and of course, filmmakers, composers (Benjamin Britten adapted it as an opera) and choreographers.

In the original novella, James sets up an archetypal story-within-a-story Victorian scenario: a group of friends gather around a fire to hear a story recounted by a man who has acquired a diary: an account of seven days penned by a dead woman, a former governess.

In short, after a slyly scandalous job interview (it sounds like a court filing from a Me Too lawsuit), the Governess is hired by a wealthy man to take over the rearing of his orphaned niece and nephew, Flora and Miles, who live on a remote estate with a housekeeper, Mrs. Grose.  A fundamental condition of the Governess’ employment is that she must never, under any circumstances, contact her employer: She is to take complete control of the management of the household and the rearing of the children and never bother her employer.

In Hatcher’s adaptation, there are only two actors, The Man (Zachary Burrell) and The Woman (Mollie Murk).  It’s a splendid device that heightens the mysterious ambiguities of the tale, and one that works brilliantly here because of the intricate chemistry created by these two performers.

The diary’s revelations play out over seven days, and like a well-engineered machine each passing day brings new revelations, and another inexorable turn of the screw.  It turns out that Flora cannot or will not speak, that Miles has been barred from returning to school for some unknown — and presumably unspeakable — offense. And gradually, fragments of stories about past events involving a previous governess and a local workman start to surface.

Since it is already established that “The Turn of the Screw” is a great ghost story, there’s little point in recounting any more of the plot.

But it is worth noting the virtuosic performances by the performers. Burrell proves to be a mercurial shapeshifter, capable of astonishing moment-to-moment physical and verbal transformation (and if you want to see an astonishing piece of physical acting, take special note of the sections where he pantomimes Miles playing the piano and appears to get every fingering, interval, and chord exactly right)!  In contrast to his fast-paced beats, the rhythm of Murk’s performance is a finely honed descent from sunny optimism through twilight into darkness. If you’re a student of acting and you want to observe two performers in a relatively intimate setting exhibiting formidable artistry, this is your chance.

Wallace — who of course in recent years has been largely focused on Shakespearian texts — handles the quintessentially modern dilemmas of this story with perfect lightness of hand. In an essay, Virginia Woolf wrote, “Henry James’s ghosts have nothing in common with the violent old ghosts—the blood stained sea captains, the white horses, the headless ladies of dark lanes and windy commons. They have their origin within us.” It’s a hard thing for a director to allow everyone in an audience to walk away with their own version of a story, but Wallace masterfully leaves us to figure it out — and my guess is everyone walks away carrying their own tale.

And from a technical standpoint, this production is something of a marvel.

Kentucky Shakespeare’s new facility is a spacious warehouse-like structure. This production is set up with seating (generously spaced) around three sides of the space. Sound quality was excellent on opening night (pre-show music by Solveig Vespertine Graywaters and Gabrielle Paulin set a perfect tone). Fight choreography by Eric Frantz is chilling. And despite the relatively Spartan surrounding, the technical theater artists have done a magnificent job of heightening the atmosphere with sound (Laura Ellis), costumes (Donna Lawrence-Downs), dialect (Rachel Carter). And deft lighting (Jesse AlFord and Lindsay Krupski) and scenic design (Karl Anderson) heighten the suspense: as the play progresses, the occasional use of garish backlighting highlights a certain suspended air of upside-down madness.

‘”The Turn of the Screw’
Through October 31
Kentucky Shakespeare
616 Myrtle Street
kyshakespeare.com
Times vary  |   $20
(Covid protocols include masks and proof of vaccine or test)