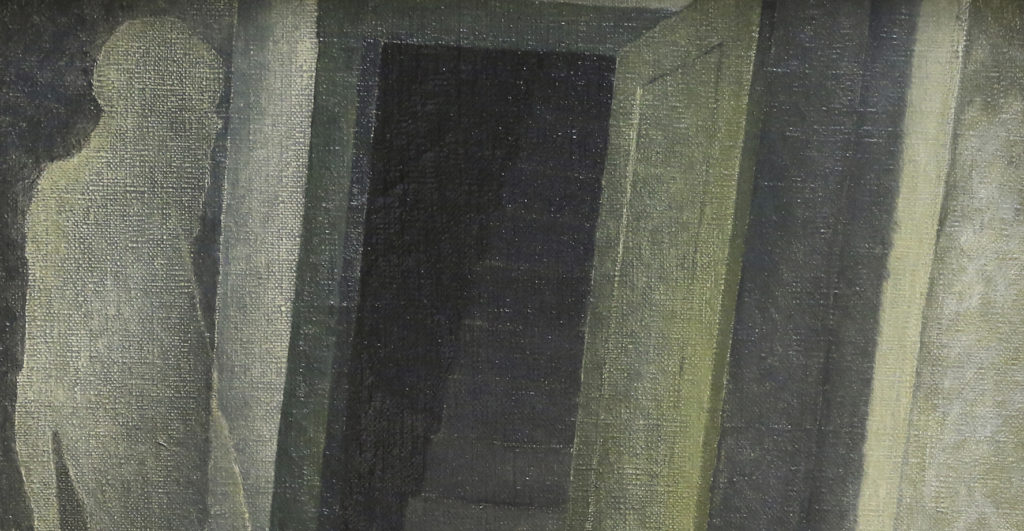 Update: The Speed Museum’s “Supernatural America” show is entering its final three weekends and will be closing January 3rd. This story has been updated.

When the  Speed “Supernatural America” show opened, we wrote a brief blog about the opening in September and then again on the opening day. This show is a perfect complement to the spooky season of Halloween, but don’t let that be your only impression of the “Supernatural America” show. There is more to looking at the unexplainable than ghosts and spirits. For most, it is how we grapple with and quest for answers.

Touring the exhibit with curator, Erika Holmquist-Wall, I was led through the exhibit in sequence that showed a heavily female-centric and well-considered collection of works that told the story of how America has struggled with issues of our faith and existence. It is a “paradigm shift,” as she stated for the museum to host such a show. The show doesn’t focus on a simple theme or a single artist but takes one of life’s big questions and explores it through works that bring the contemporary moment together with that of the past.

“It really does ask us to not discount other’s experiences,” says Holmquist-Wall.

The show is the largest show the Speed has done with over 200 pieces of art and ephemera. The show is so big that it takes up two floors of the museum. It has gathered pieces from around the nation. Originally organized by the Minneapolis Institute of Art, the show looks at the idea of the supernatural from the 19th century through current times.

One of the ways the works for the show were chosen was to consider artists who had mentioned having their own supernatural experiences.

The first floor of the show deals with the land of America as a haunted place in all the ways that might be, including the history of the nation that many Americans continue to find too painful to reconcile. Then the second floor gathers objects and ideas of the “genre,” including aliens, spirits, etc. that speak to the supernatural in a physical form.

Many of the works, Holmquist-Wall says, were created to “answer questions.”

While perusing the show, take time to watch the video works. There is a tendency to watch quick segments of video and not entire works. Skipping the videos presented, lessens the experience of sections of the show, which is made more intense by understanding the supernatural, its attraction, accessibility and its ability to motivate. These works, spanning several ideas and times, offer a way for each section to make sense and for some of the ideas that seem esoteric to become concrete.

Tony Ousler’s “Thought Forms,” is a piece that puts our current existence into perspective and direct interaction with all of human history (see Ousler via Zoom Webinar on Oct. 26).

Other pieces, like Betye Saar’s “Spirit Catcher” wrestle with the idea that spirits need vessels, whether that is to give them shelter or to keep them under control, she constructs inspired masks and totems to offer spirits places to reside.

The show is full of unique female perspectives with a section where female sexuality as power is given room to breathe. It is impossible to consider a show about the supernatural without acknowledging that women have often led the way for pathways between the worlds to be opened through them.

Documentation of Carolee Schneemann’s “Interior Scroll” performance hangs alongside other female artists’ spiritual expression brought forth through the female form. In this performance, Schneemann pulls a scroll from her vagina with text from her film, “Kitch’s Last Meal.” The print was then stained with beet juice, coffee and urine.

With any knowledge of female magick practices, these items and others like blood or tea are often used in spellmaking.

Do we agree with it all or find it all beautiful or attractive as art objects? Perhaps not, but that isn’t the point. The point here is that we live in a nation that is, particularly in this moment, trying to understand itself. It isn’t a new idea but it is one that is particularly pressing for the nation to figure out. “Supernatural America,” reminds us of the path we’ve traveled to understand living and dying, having faith and having that faith challenged or destroyed. This show makes us confront what it means for the spirit if we don’t answer to our pasts.

The “Supernatural America” show runs from Oct. 8 through Jan. 2. Sundays at the Speed are free so no one should miss a chance to explore this exhibit. After leaving Louisville, the show will travel to Minneapolis.

Perhaps you will find yourself transformed, disturbed, scared or maybe you will feel a sudden gift of better understanding how the spirit drives us to become greater.