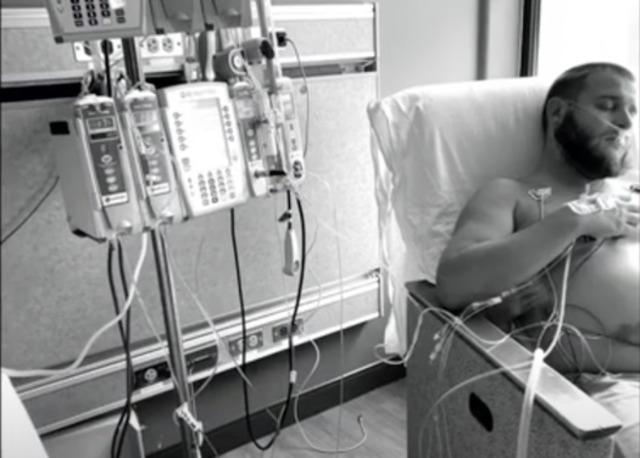 Ethan Koeler, hospitalized with COVID-19. | Photo via Ethan Koeler/Foundation for a Healthy Kentucky

Marshall County resident Ethan Koeler said he was skeptical of the COVID-19 vaccine. Then the 29-year-old contracted the novel coronavirus and was hospitalized for two weeks with a fluid-filled chest cavity and collapsed lung.

Koeler is now urging his fellow Kentuckians to consider getting vaccinated, as part of a statewide campaign called “Take it from Me” launched by the Foundation for a Healthy Kentucky and Kentucky Medical Association. Koeler said he now believes the shot would have kept him out of the hospital.

“If I knew the vaccine would have even just taken some of the blunt away from it, I would have gotten it, because it was so horrible,” said Koeler. “If the vaccine could just help a little bit that you don’t have to have the symptoms that you could possibly have, I would recommend getting it. But like I said, it’s still everybody’s choice.”

So far,  62% of the state’s population has rolled up their sleeves. Woodford, Franklin, Fayette, Campbell and Boone counties have the highest vaccination rates.

Koeler said he’s fully recovered and recently received his first shot of the COVID vaccine, because doctors say there’s still a chance he could contract the virus again.

“They told me that I could definitely get it again,” said Koeler. “And that if I did get it again, it would probably take me out. They did recommend very strongly that I get the vaccine after I was back recovered enough to handle it.”

Dr. Neil Moser, president of the Kentucky Medical Association, said he sees cases such as Koeler’s daily. He said he hopes residents will trust their doctors that the vaccine is safe, effective and necessary to help end the pandemic.

“The vaccinations,” said Moser, “which have now been available for almost a year, have been given billions of times across the planet, is safe and is very, very effective at saving lives.”

He added that public-health experts are working to increase vaccinations in counties lagging behind – regions seeing some of the worst hospitalization rates.

“Spencer, Louisville, Christian, Elliott, Jackson, Hart, Ballard, Hickman, Casey, and Knox actually have some of the lowest vaccination rates in the nation,” said Moser, “not just in Kentucky.”

As of last week, more than 1,300 people with novel coronavirus infections were hospitalized in the Commonwealth, including nearly four hundred in intensive care unit beds, according to state data.