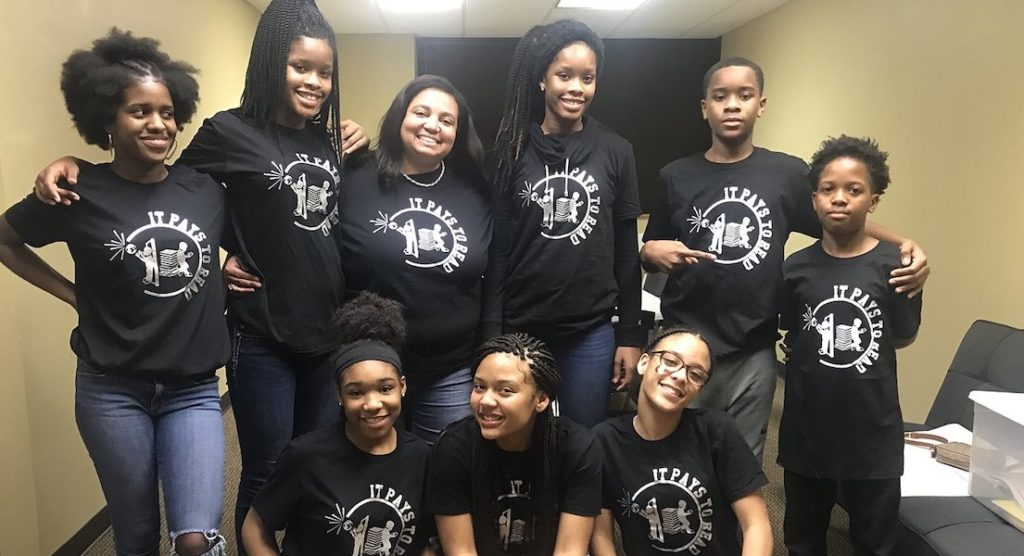 Deedee Cummings with her nonprofit reading group, It Pays To Read | Via deedeecummings.com

Deedee Cummings is a one woman powerhouse looking to inspire and engage people who love books and the people who write them by founding the Louisville Book Festival. Cummings is a Louisville author — during the pandemic she has written a five part children’s picture book series loosely based on her own daughter’s life (Kayla Pecchioni, Youth Performing Arts School graduate and Broadway performer) — but she is so much more than that. Throughout her career she’s worked with Child Protective Services, been a therapist, become an attorney, founded a publishing company that is focused on producing books that amplify diverse voices (Make A Way Media), founded a nonprofit called It Pays To Read, and ultimately founded the Louisville Book Festival. I sat down with Cummings, and she told me her story.

DC: I have been a therapist for more than a decade, but I’ve worked with families and children my entire career, which has been over two decades. Initially, I specialized in working with children in therapeutic foster care, and these were kids by the time you make [it] to therapeutic foster care, you’ve been through a lot of placements and a lot of stuff, and you’ve had to tell your story many, many times. So this is a tough crowd to do therapy with, because they’re not going to tell their story. They’re just not going to talk, you know, about what they really need to talk to a therapist about the most.

So I started writing with these kids, which turned out to just be really, truly a miraculous process to witness, because they did want to talk about their story, but they didn’t want to; they didn’t understand the point of talking about it. So once they started writing their stories with me, they really began to realize the therapeutic benefits of, of being able to tell that story in their way. For them, it was the first time they told the story for them, not for someone else, and it was just such a therapeutic healing process that I started writing my own stories, right alongside of them as they were writing. And the most beautiful part was when they realized that that story for them continues and that they get to write the final chapters of the story.

And so from that I actually founded a nonprofit called It Pays To Read so that we could buy kids books, especially books with characters who look like them or reflected their experiences. Because kids, the kids I work with, were very hard to reach, and they didn’t want to read what everybody else was reading in school. But these kids are not, they don’t care about “The Canterbury Tales,” what they do care about is Angie Thomas’s “The Hate U Give.” And man, it is so powerful when you put that book in their hands, and they read it because some of them, this is real. Some of them didn’t even know books like this existed because they’ve never seen them.

And so I’ve really taken all of the things that I’ve seen and done throughout my entire career working with people, and have now turned it into an effort to make sure that kids know like that books like this exist, that they understand how powerful they are.

I went from my counseling career to forming Make A Way media, which is a publishing company which produces literature that amplifies diverse voices, so that all kids can see themselves in a book to, to founding It Pays To Read which was a vehicle to get books and kids hands and help them process these books, to founding the Louisville Book Festival which I hope will, on a city wide scale, highlight these kinds of books, all books, but especially highlight these kinds of books and make sure people are aware of the wide variety of books that exist.

LEO: I saw that you created the Louisville Book Festival in 2018. Is this year your first virtual version of the festival?

DC: So we founded in 2018, but 2020 was the year that we actually put on our first festival. And we had to go virtual, it was in the fall of 2020. Everybody told me to cancel it. Everybody said “Deedee, it won’t be a fail if you cancel this and hold, and wait until next year.” And I’m so glad I went on ahead and held it because there is no waiting until this year, this year is the same it’s just a repeat of last year.

LEO: So the authors that are signed on they lead this conference, right? Is it a schedule of different speakers on different topics, or do they just kind of get on, they can talk about whatever they want to?

DC: Well, we have a schedule with different topics, but authors can talk about whatever they want to during their author chat. And so virtually how that works is all our authors are available online, and you can come online and you can ask to talk to that one author individually, and then we’ll put you in a Zoom breakout room. And so you can still meet that author just like you would at a table. As far as the actual festival schedule goes, Friday and Saturday, Oct. 22 and 23 from 10 a.m. to 6 p.m. will be our hours. We will have a schedule of authors who will talk about specific subjects, so some might talk about why they decided to be an author. We’ll have an illustrator who will get on and hopefully there’ll be a lot of kids who will get on and they can talk to the illustrator about why they became an illustrator, and she’ll show them some easy things to draw to get started and talk about that dream.

LEO: How can the community best support the Louisville Book Festival and It Pays To Read going forward? What would you like to see from Louisvillians as the years go by?

DC: I would love for them to follow us however. Whether that’s on social media, or just every once in a while tap into our website to make sure that they know the festival is coming every year. Whether it’s virtual or not I would love for them to attend the festival, because if you are interested in books and you love books and you want something like this, we need you to show up and support it. Last year did have a huge turnout, we had almost a thousand people register for these courses last year, which we’ve been told across the board by many people is  kind of unheard of for a first year festival in any format but especially a, a first year online festival, so that shows that people do want this, but we need that number to be higher than that this year because we need to show people that  more people than ever are registered, and we want to grow every year. So follow us, so you know when the dates are, attend our events, spread the word about our events. Finally, you know, we do need money. We do great work, I donate my own time and my own money regularly to this program. If everybody who even just read your article donated something they could either buy books for kids, or help us provide behavioral health services to kids who have no insurance or help us bring speakers to Louisville who will, or pay, this is really what I should say, pay authors who are in Louisville to come and share their craft and their knowledge at the Louisville Book Festival which is invaluable. And people can do that with, you know, not you know huge amounts of money because I do it everyday without huge amounts of money. So if people could do those things, or any one of those things it would make a huge difference.

Visit www.louisvillebookfestival.com to register for the festival (it’s FREE!), or to donate.