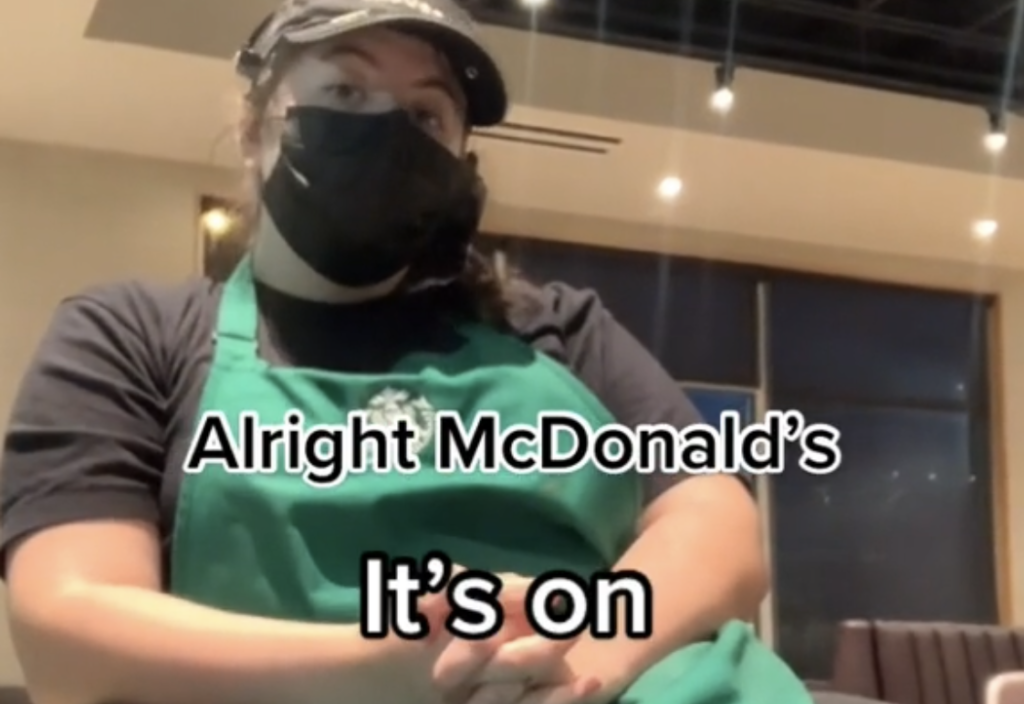 A Jeffersonville Starbucks employee prepares to wage war on McDonald's

As our fast food corporate overlords battle it out over who shall claim Middle America and make the most realistic Impossible burger, their soldiers on the ground in Jeffersonville are waging a war of their own.

To put it less dramatically: Employees of the 10th Street Jeffersonville Starbucks and McDonald’s are beefing on Tik Tok, and their videos have received millions of views.

Now, the Jeffersonville Starbucks’ account has mysteriously disappeared — maybe Grand General Siren did not properly appreciate her peons’ social media antics. But, thankfully, the videos have been preserved by the teen archivists of Tik Tok.

The Starbucks was the first to make a video, having spotted an offensive message on the digital sign at the McDonald’s across the way:

They retaliated in signature Starbucks fashion: With a cute, chalk sign.

An employee at the McDonald’s, @kri.stiaaaa, noticed the offense and retaliated.

But, perhaps the biggest twist is that these seemingly opposed factions are working together for the mutual gain of online clout. @kri.stiaaa said in a pinned comment on her video, “I would like to let everyone know we did not actually take the sign that was all planned.”

Ah, well — we’re just excited to see downtown Jeff getting some national attention that doesn’t involve arrests at the local Thornton’s (a frequent feature on TV when “Live PD” filmed in the Southern Indiana town).

And, if @kri.stiaaa’s latest video in the saga is an indication, there may be more to come…