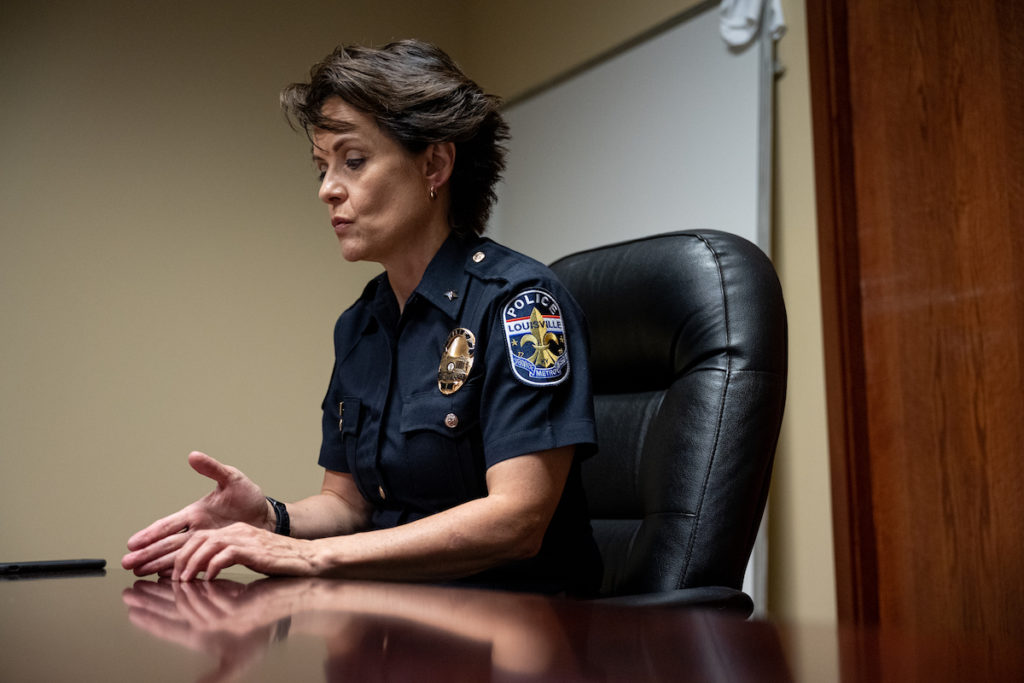 This week’s LEO Weekly featured a cover story from Louisville Magazine — a massive, five-month profile of LMPD Police Chief Erika Shields. Titled “Who Is The Real Erika Shields,” it deeply dove into the juxtaposition of someone who talks about police culture progressively, while often being surrounded in controversy. Here are four takeaways from the story — reported by Josh Wood (who just joined LEO Weekly as a staff writer).

1) Her proponents think Shields says all of the right things, is a progressive law enforcement leader and talks about police culture in a refreshing way, but critics think that it’s a facade, and that the police chief — who has often been embattled in controversy — isn’t capable of the action to back it up.

In the profile, Metro Council President David James said that the committee who recommend Shields as police chief, a panel made up of mostly people of color, was impressed with what she said in the interview process:

“Everyone picked Shields as No. 1. She was just saying all the right things.” James recalls how Shields discussed the history of policing and how policing relates to African Americans and other people of color — something he says none of the other candidates did. “She recognized it, she knew it — I knew it because I was a police officer, and I’m Black,” James says. “The fact that she recognized that and knew that spoke volumes to me.”

Shameka Parrish-Wright, an activist and candidate for mayor, is quoted as being much more cautionary of whether Shields’ actions meet her words.

Parrish-Wright says, “To me, you can say one thing, but do your actions match that? So, you know what to say because you come from Atlanta, which has a larger Black population than we have.” (Regarded as a Black mecca, Atlanta is more than a third African American, and Shields was the city’s first white police chief since 1990. Louisville, by comparison, is about 22% Black.) “She says one thing, but we still have someone that was beat up right outside our Hall of Justice by police for simply standing out in the street with a cross.”

2) Shields thinks federal charges are coming for the LMPD.

In an interview in June, Shields told me she expects more federal charges — particularly charges for actions by police on the night David McAtee was killed at his barbecue restaurant at 26th and Broadway, across the street from Dino’s Food Mart. Soon after LMPD officers and National Guard soldiers moved in to disperse a non-protest crowd gathered in violation of curfew, in the early moments of June 1, 2020, LMPD officer Katie Crews began firing pepper balls in the direction of people in front of McAtee’s restaurant. As patrons retreated into his kitchen, McAtee stepped into the doorway and fired a pistol twice (what his family’s attorney said were warning shots into the air), prompting LMPD officers and National Guard members to fire back, with a National Guard soldier killing him with a bullet from a M4A1 assault rifle. (McAtee’s family has said he would never intentionally fire at police.)

Shields says the firing of pepper balls at 26th and Broadway the night McAtee was killed “really jump-started the chaos that ensued” and characterized it as the result of the decision-making of one individual. “I think you’re going to see that there had been a culture that had allowed for last summer to really go sideways on multiple fronts,” she says.

3) Shields said that Breonna Taylor was killed as a result of the decision making of the LMPD. She said most of the blame relies on the officers that secured the warrant.

“I was heartbroken,” [Shields] says. “I saw a young lady who was dead who should not be dead. There’s no two ways about it: It was because of the decision-making of a police department she was dead.” I asked Shields where blame lies in Taylor’s killing. “I would put the bulk of the responsibility on the individuals who secured the warrant,” she says.

4) She talked openly about how her ideas of policing have changed since the days she was undercover in Atlanta.

“At the time, oh my god, I loved it. It was an adrenaline rush serving drug search warrants, locking somebody up who had the drugs on them,” she says. “At the time I enjoyed it. I didn’t know better.” Decades later, Shields says she had gained a broader perspective on addiction and the failures of that kind of policing. When the opioid epidemic arrived — and was comparatively seen as a public-health crisis — Shields saw racial disparity in how it was treated. “We got into the heroin-opioid crisis — that directly mirrors crack — and yet the rules of enforcement are markedly different,” she says. “And it is no coincidence that it’s related to race.”