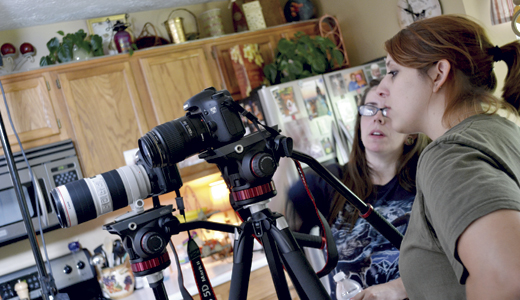 On the evening of Friday, Oct. 8, the filmmakers peeled a piece of candy off a sign. On the back was the name of a genre they’d be basing their movie around.

From there, they had 48 hours to write, shoot and edit a film — part of Louisville’s version of The 48 Hour Film Project, a competition held in cities across the world.

The films are four to seven minutes long and all must contain at least three elements: a character named Vanessa or Van Turpentine, a prop map and the line “I haven’t seen her in three years” or “ I have not seen in her in three years.” There will be a horror movie, buddy film, superhero project and more.

Tonight’s audience will vote on their three favorite teams. A Best Film will be chosen and will be eligible to compete in the 48 Hour Film Project’s Best Film of 2021 contest.

This evening’s screenings will be broken up into two groups, one at 7:15 p.m. and the other at 9 p.m., with a $15 ticket granting you access to both. It’ll be a real movie theater experience with a cash bar, including sodas and popcorn. For those who don’t want to show up in person, there’s a virtual screening option available as well. To buy tickets, go here.

Here’s a promo for the films, showing clips from each project.