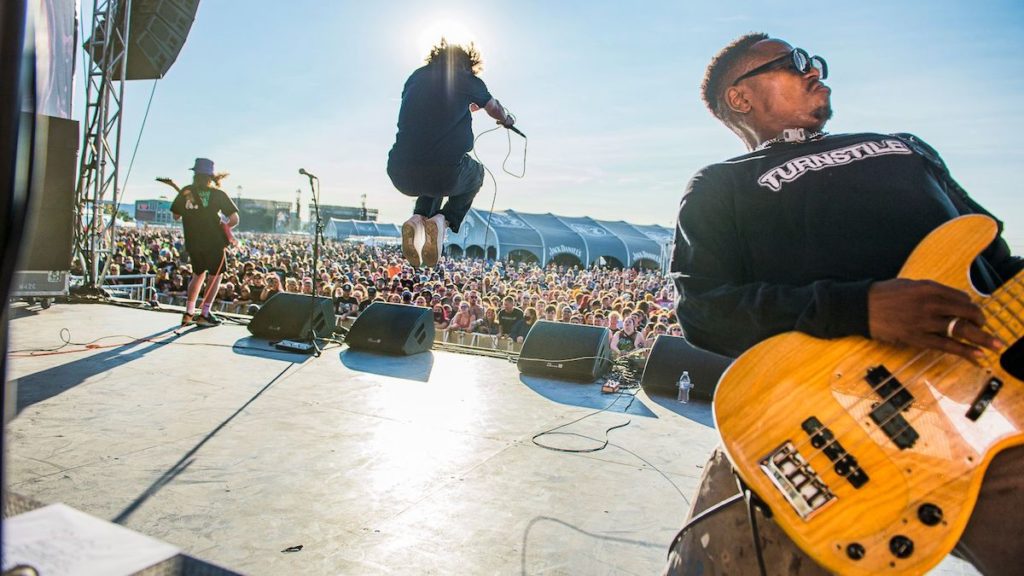 The band Turnstile at a previous Louder Than Life.Photo courtesy of Danny Wimmer Presents.

Per my editor’s instructions, I went to four shows at Louder Than Life this weekend that represented a combination of old and new music –– Judas Priest, Jane’s Addiction, Turnstile, and Knocked Loose –– plus a few others, both to get additional context and because the opportunity to see them was unmissable.

I did find it a bit funny, though, that I was assigned this story, because I am not a metalhead. I like musicals, psychedelic rock, Teddy Robb, and Fleetwood Mac. The only metal shows I’ve ever been to were at a small bar four months ago. Granted, the three days I spent at Louder Than Life did change my interest very quickly: I can easily say that I now want nothing more than to go back to another live metal festival as soon as I can.

Ironically, it’s kind of appropriate that I felt out of place, because one of the hallmarks of metal as a genre is that it is about not fitting in, to varying degrees from simply Being Different to revelling in shock and gore. Even outside of the concerts themselves, it’s clearly an element of the culture. Never before in one place have I heard the word “fuck” expressed so passionately and frequently, which is saying something because I once spent about half a year reporting on a BDSM dungeon. I saw it on T-shirts –– “FUCK THE CORONA VIRUS,” “I’M A RAY OF FUCKING SUNSHINE,” “I LISTEN TO METAL BECAUSE F☠️K YOU,” to name a few examples –– and heard it shouted from the crowd and on each of the festival’s three stages.

Don’t get me wrong, there need to be spaces where people can swear freely. But honestly, it does get to a point where all of the shock-for-the-sake-of-shock starts to wear on you. I’m not proud to say that I left an assignment early (sorry, Scott and Erica), but there was one concert that overstayed its welcome –– both with me and other guests.

I spent the first 20 minutes of the Jane’s Addiction show in a decent spot close to the front of the crowd. I used my opportune location to take dutiful notice of The Things I Had To Write About: the people who were singing along most eagerly appeared to be in their 40s and 50s. There were more couples than I had seen at other shows. Compared to other performers I had seen by that point, the band was more dressed up; lead singer Perry Farrell wore a colored suit jacket and enough stage makeup to look like he had leapt right out of “Swan Lake.”

After a point, though, I was tired of having spent my day in the middle of unending weed and cigarette smoke, and I walked to the far, far back of the space, finally settling on a spot on the lawn near a row of booths selling Asian noodles and pizza. It was already very chilly, and my feet had been aching for at least an hour.

As I walked away, I heard Farrell tell the crowd that the politicians on both sides, those motherfuckers, were corrupt, and the only way we could save the country was with tourism –– by having a festival just like this one! Sure, I guess. Also, he told us, “Die Hard” is a Christmas movie! It was like one of those “let’s settle this once and for all” Facebook pages, creating controversy with Boomers just to get attention.

And then it got uncomfortable. In a break between songs, Farrell joked about how he had told one of his bandmates earlier that night that the man looked good enough for Farrell to perform a nonconsensual sex act on him. Elsewhere in the set, he talked about “bringing the beautiful girls on stage,” and throughout several of his songs, he would stand in place and thrust his hips like a mechanical doll. When I decided to leave, I walked out to the beat of him saying, staccato, “and fuck-ing… and suck-ing…” I’d had enough.

I was too far away to get a sense of the main crowd’s reactions, but at least one person around me said “ugh” after one of Farrell’s jokes. Farrell would say something controversial, then he would notice the crowd’s reaction (which was near silence, from where I was sitting.) He would respond with faux confusion, like that one coworker who always complains that you can’t joke about anything these days. He seemed genuinely surprised that people weren’t more receptive to jokes about sexually harassing a bandmate.

I thought back to the Knocked Loose concert from the day before, where frontman Bryan Garris,  a Louisville native, dedicated a song to the LGBTQ community, women, and anyone else “who’s ever been made to feel less-than for who they fuckin’ are.” I realized that this was fairly typical of the other young groups I had seen: they had a stronger sense of their audiences’ needs, wants, and expectations.

I don’t just mean that they were more like their audiences; I mean, for example, they also facilitated better experiences in the audiences. Knocked Loose, for example, brought six blue beach balls that volleyed around the crowd before a swole security guard punctured them all with a pocket knife, leaving them to sag sadly in front of the stage like post-Halloween pumpkins.

Beyond that, the biggest difference between the older and younger groups was their use of spectacle. The older groups, as big name-brand draws, tended to perform at night and on larger stages, which gave them more room for sets, costumes, and lighting effects. Judas Priest, for example, had a fully dressed stage that put them inside an electrical warehouse. The band members, likewise, wore studded black and gold bodysuits. Frontman Rob Halford made his way onto the stage at one point atop a motorcycle and brandishing a riding crop in his mouth. Metallica, who concluded the festivities on both Friday and Sunday, shot off a barrage of fireworks.

But what the younger groups lacked in visual spectacle, they made up for tenfold in their collective strong suit: powerful performances. I’ll be honest: Metallica and Judas Priest didn’t particularly impress me. Blasphemy, I know. What did impress me were the whirling, thrashing, jumping, headbanging performances from Knocked Loose and Turnstile, whose band members seemed possessed by the purest, rawest energy of metal.

That energy spilled over into the audiences, too, who seemed to be there for the music more than just the bragging rights of saying they saw such-and-such famous band. On average, they sang along more, knew more lyrics, threw up more horns, and participated more eagerly in collective acts like flipping off the WLKY helicopter. Even when Turnstile ended their set 7 minutes early, the audience didn’t mind; the group’s bassist, “Freaky” Franz Lyons, gave the security guards every band member’s setlist to hand out to the crowd, a gesture that was, no pun intended, very well-received.

The dozens of concerts I’ve attended and reported on this year, at Louder Than Life and elsewhere, have almost all been up-and-coming bands who have certainly had a more pressing need to recover lost income than the big-name groups with 20-plus years of albums and tours behind them. Maybe that’s why I consistently had better experiences with the newer groups this weekend: they were hungrier for the opportunity to be on stage again, surrounded by fans and family and friends. They needed this, they needed us, and they knew that we needed them. As one of my newest favorite musicians said on Thursday night to hundreds of cheers: “It is sooo fuckin’ good to be back.”