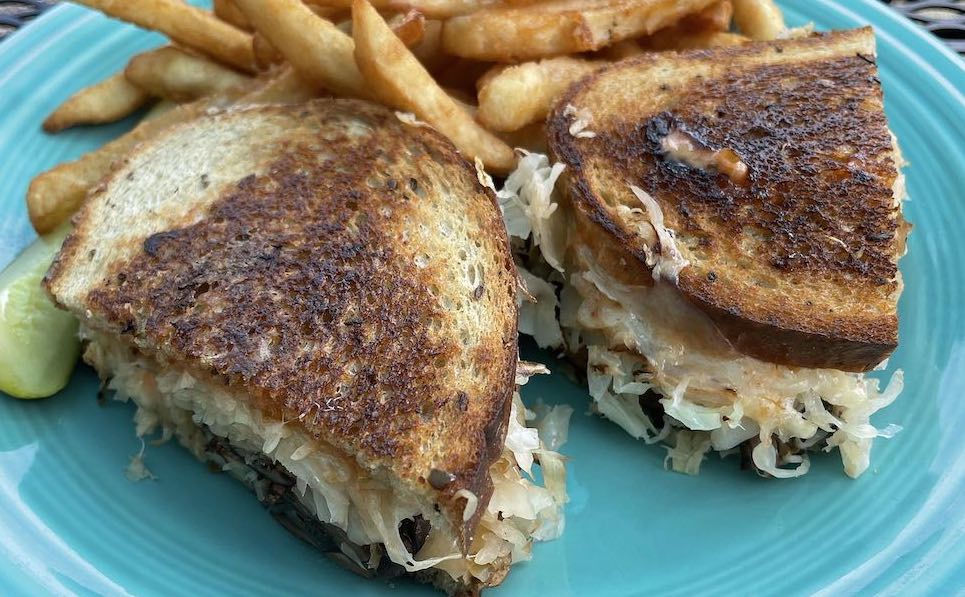 In this veggie Reuben, marinated portobello chunks filled in for corned beef. | Photos by Robin Garr

Show me a fourth generation family restaurant that traces its heritage back to the 1920s, and I’ll show you a restaurant that’s doing things right. That would be Kayrouz Cafe, and it should come as no surprise that the current generation is handling COVID safety with style and grace.

“Our entire kitchen and wait staff have been fully vaccinated,” a sheet on the front door assures customers. There’s ample outdoor dining, with a half-dozen patio tables offering a significant boost to the tiny eatery’s interior seating.

The Kayrouz family has been making local diners happy with good, simple and delicious fare for a very long time, all the way back to the original Kayrouz Cafe at Preston and Fehr (now Liberty) streets nearly a century ago.  J.P. Kayrouz, of the second generation of the family business, operated in St. Matthews for 25 years or so until its building was demolished in 2003 to make way for Wilson & Muir bank.

A third generation opened the current location in 2006 in the tiny St. Matthews building where it still resides, now with a fourth family generation in charge. The food is still freshly made and delicious, the service careful and friendly, and quite a few popular dishes have remained on the menu through the generations.

The menu consists almost entirely of sandwiches (and burgers), soups and salads, and pricing has remained fair, with only reasonable inflationary hikes since my 2006 review. The avocado and mango salad, then $7.85, is just $10 now. The “nova” chicken breast sandwich with avocado, bacon and brie topped the sandwich list then at $8.95, and it’s still the high-end sandwich at $12.75 now.

Five burger choices — hand-pressed, cooked to order and served on brioche bun — are priced from $13 (for the Kayrouz cheeseburger) to $22.95 (for the massive TJ Double, featuring two half-pound patties with double cheese and bacon). A non-sandwich item, 10 hand-breaded and fried extra-select oysters, is $17.95.

Three meal-size appetizers are priced from $10 (for homemade hummus with pitas) to $12.75 (for a chicken quesadilla). House-made chili and cheddar broccoli soup are both $6.50 for a bowl. Three dinner salads are all $10; the café house salad is $6.

Dining under pretty turquoise umbrellas on an outdoor table was surprisingly comfortable, a sensation enhanced by Kayrouz’s use of heavy, quality silverware wrapped in large, white-cloth napkins and attractive dishes that remind me of Fiesta ware.

A memorable Parmesan and pesto salad ($10, but $3.50 more if you add chicken) was thoughtfully designed and artfully assembled. Fresh mixed greens were tossed with chopped tomatoes, pine nuts and grated strips of Parmigiano Reggiano, then topped with strips of unctuous caramelized onions and dressed with an aromatic dressing of fresh pesto and oil. In a nice extra touch, the server discerned that we intended to share the salad and had the kitchen serve it on separate plates.

We had planned on a cod sandwich but got there too late: The kitchen had run out. We went with haddock instead, which looked like a significant up-charge until I ran the numbers: Eight ounces of cod is $13.25; a huge slab of haddock — 11 to 14 ounces for a fillet — is $17.95. What a deal!

It truly was an impressive slab of fish, an entire fillet long enough to extend off both sides of a dinner plate, enough to make two sandwiches with the tasty seeded rye bread provided. The breading was hot and crisp, while the white fish was flaky and mild. Haddock and cod are related and boast similar flavors. Haddock has a reputation for being more flavorful but not as flaky, so you can take your choice. We were happy. Homemade tartar sauce was excellent too, creamy with plenty of dill.

The menu offers both a regular Reuben ($12.50) and a veggie Reuben ($10.75). With its heritage in the Omaha stockyards and loaded with corned beef, the standard Reuben is such an iconic meat sandwich that the idea of a meatless model tickled my fancy. It was good, too, built like a standard Reuben with sauerkraut, swiss cheese, thousand island dressing, and crisp rye bread all contributing their characteristic flavors. It’s so good that you don’t mind the substitution of portobello mushroom chunks in tart-sweet marinade one bit.

Most of the sandwiches come with choice of a half-dozen sides. Homemade curly kettle chips, warm, salty and super-crisp, were good enough to wean us from the factory model. Regular French fries were top-notch, too — long and hand-cut, fried with an extra-crisp, and a crunchy exterior surrounding creamy, steaming potato.

The menu doesn’t list desserts, but the server told us that carrot cake was available, handmade by the chef’s grandmother and big enough to serve four. Maybe next time!