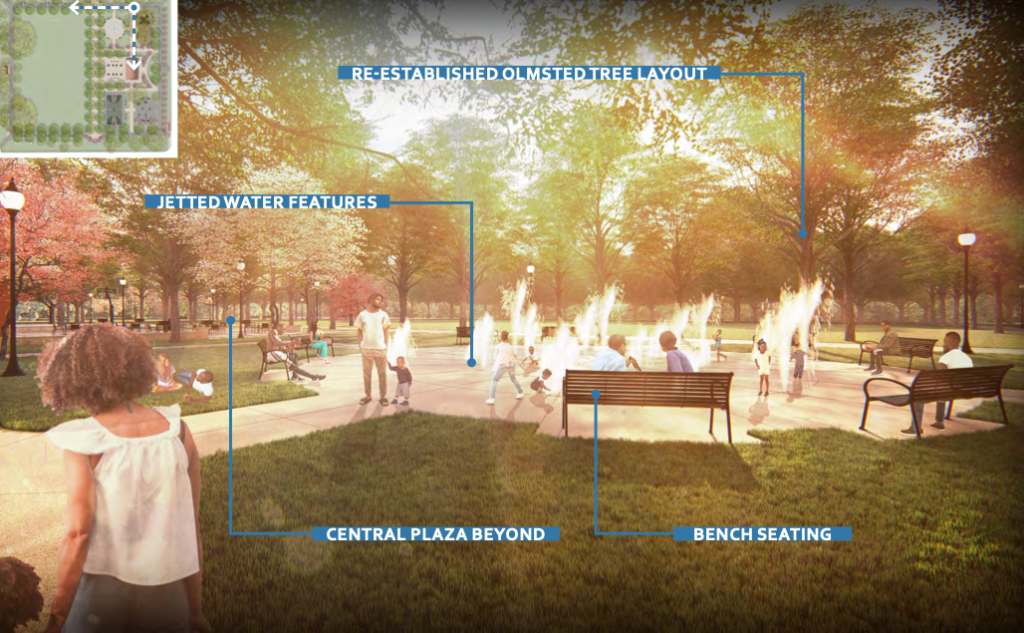 What Elliott Park could be.

The cost of the Elliott Park renovation is expected to be about $1.3 million, and Olmsted Parks Conservancy is currently raising funds to go forward with the project. A master plan calls for an expanded sprayground, transforming the swings area into a new basketball court and fitness area and an updated shelter house with a central plaza outside of it.

Elliott Park in the Russell neighborhood was designed by the Olmsteds in 1908. Previous to that, the park was home to Louisville’s connection to major league baseball. The first Black player in the major leagues, Fleet Walker, played there some years before in 1884. And Louisville’s major league team, the Eclipse team, played there beginning in 1892. In fact, the bat synonymous with Louisville and baseball, the Louisville Slugger made its first appearance at Elliott Park. Even now young sports teams use the park to practice.

The Conservancy is also raising funds for the Chicksaw updates, and the public is being asked for input. The Olmsted conservancy has posted a survey on their website. The survey asks about the frequency and details of park use plus the pieces of this historic family gathering spot that matter most to park users. There are plans, a joint project of Olmsted Park and Wilderness Louisville, to renovate the park’s lodge and to restore the lake for safer navigation and recreation purposes.