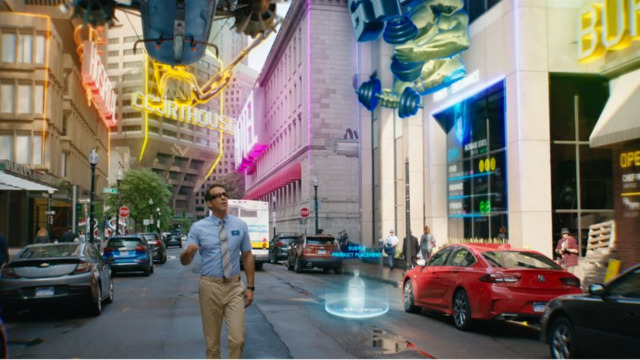 Guy (Ryan Reynolds) stumbles onto a way to see his world as it really is, a vibrant, violent videogame, in "Free Guy" | 20th Century Studios

Pop quiz, hotshots: Name the last high-concept comedy that you saw that really wowed you.

If IMDb’s movie database is to be believed, one would have to go all the way back to the 1990s to find gold standards like “Groundhog Day” or “The Truman Show,” which effortlessly combined big laughs with genuinely big ideas.

Imagine my surprise, then, when I found myself legitimately enthralled with “Free Guy,” a bona fide winner of an action-comedy about a guy named Guy who discovers by accident that he’s not really human but instead an amalgamation of computer code used to create NPC’s (non-playable characters) for a wildly popular videogame called “Free City.”

If you’re not familiar with NPC’s, they’re the background characters in videogames like “Grand Theft Auto” who populate the virtual world and exist solely to allow gamers easy targets to run over, rob or kill.

They have no idea they’re disposable fodder for online sociopaths who act out their worst impulses while hiding behind a digital avatar. But what if suddenly those background characters woke up to their reality, and decided not to be punching bags anymore?

Director Shawn Levy has a truly spotty record with his kind of high-concept fare. “Date Night” was so-so, and I was never a fan of the “Night at the Museum” franchise, although I appreciated the idea.

Thankfully, Levy stays out of his own way in “Free Guy,” and allows his leading man, Ryan Reynolds, who plays Guy, to just do his thing, which can be an awesome sight to behold, especially when Reynolds is riffing along to a solid script by co-writer Zak Penn (“Ready Player One,” “The Incredible Hulk”).

“Free Guy” owes a huge debt to movies like “The Truman Show,” “Ready Player One” and even “Wreck-It Ralph,” but it plays in its own wonderfully wacky sandbox without cribbing from those earlier films or feeling derivative in the slightest.

Because there’s a slew of surprises throughout “Free Guy,” the folks at Walt Disney Studios have kindly asked that critics refrain from spoiling any of the big reveals, but I can tell you that the film operates in two worlds, both virtual and real, without missing a beat.

Reynolds is at his best here, too. Imagine a kinder, gentler Wade Wilson/Deadpool without the hard ‘R’ F-bombs, but the jokes come at you just as fast and land with the same zing.

For instance, before he realizes who and what he really is, Guy follows the same routine every day. He wakes up, checks on his goldfish, puts on the same blue shirt and goes to get his favorite cup of coffee, which he proudly proclaims is “like losing my virginity, except in my mouth.”

Then he goes to work as a teller at a bank that gets robbed over and over and more by playable characters looking to boost their score.

When Guy meets Millie (Jodie Comer), whose avatar in “Free City” is a badass corporate assassin, she tells him that she not only knows the man behind the creation of everything that Guy believes to be real — Antwan (Taika Waititi), a greedy tech wizard, whose team designed “Free City” — but that he’s also an awful person, Guy is understandably shocked and confused.

The visual aesthetics of “Free City” are a marvel to behold. Everywhere you look on-screen something is happening, whether it’s a car chase, a helicopter crashing into a high-rise or a guns-blazing villain wreaking havoc.

“Free Guy” is pure escapist entertainment, but also packed with sly observations about real life and virtual life, which makes it a surprising treatise about the dual worlds that many, many people now inhabit and move between on a daily basis.