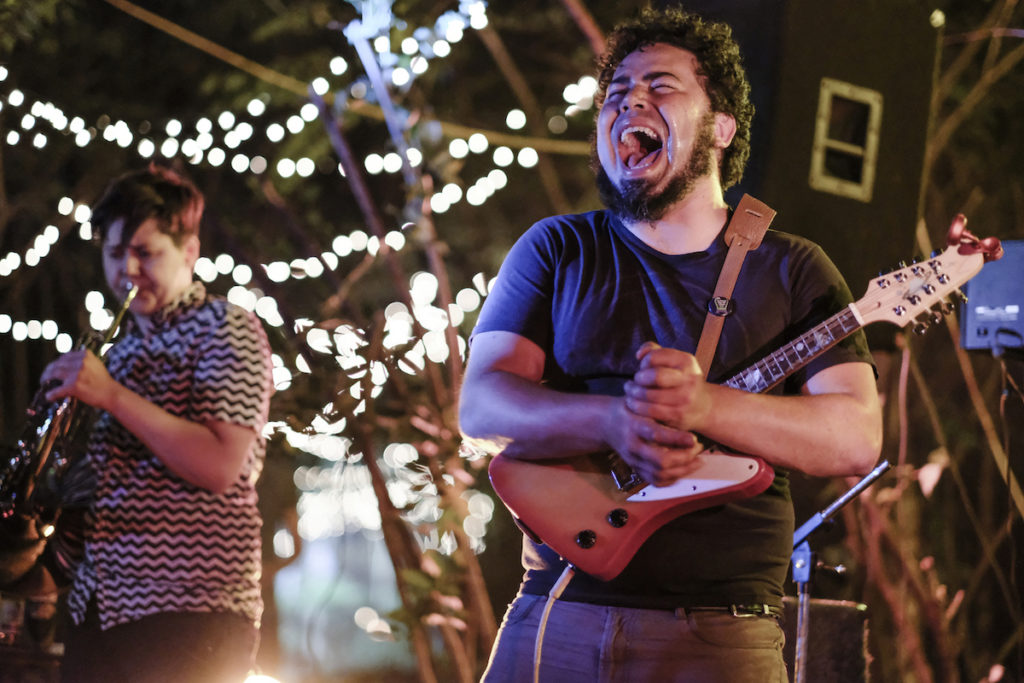 In the heart of the lockdown last year, Isolation Tank Ensemble released “March Of The War Mage,” a song that feels like it now has a place within our post-pandemic world with its sense of approaching uneasiness, its unexpected turns at unexpected corners. For a band that violinist Kirstyn Blandy says doesn’t want to take itself “too seriously,” they’ve certainly created a serious listening experience.

“We wanted something different, something loud, something rowdy,” Blandy says. “Life throws everyone lots of curveballs: you can wake up in a great mood and come to the end of your day confused and wondering what just happened. ‘War Mage,’ in a lot of ways, was going into uncharted territory, challenging ourselves to stitch musical motifs together into a tangible experience, a musical voyage. For me, it’s a battle song. It takes on sorrow, despair, longing, madness and a final triumph of victory as we overcome them. When we go to battle against the War Mage, we are battling ourselves, our perceived shortcomings, a future that perhaps used to seem a lot brighter.”

“March Of War Mage” begins appropriately enough, with a slow, almost sinister buildup of banging drums, violins and horns that immediately evokes a forbidding sense that something is definitely on the move and headed this way. There are several movements over the course of the seven minute epic, from chaotic thrashing to symphonic crescendos and peaceful intermission that wind the track down before the inevitable trample back into the war mage’s final leg. A song like this, especially such a roving, exploratory instrumental one, is hard to put into precise, definable terms but, if you wanted, you could call it, according to the band itself, “trash prog.”

Mateo Barnett, the band’s electric mandolinist, says “War Mage” was a concentrated effort on the entire band’s part. “I think most of our music comes about as a conversation with each other, and this one was created that way also. Sometimes folks have a vision for the tone and journey of the song, but this one came about with mostly everyone fucking around in the practice space and finding those ‘ah-ha’ moments together. I had two main riffs from an old, dead song, and one week no one but our guitar plater Andrew could make practice, so he and I sat face to face and made jokes and worked on riffs and built the basic skeleton of the song that came to be what it is now.”

And, according to Barnett, there is a small Easter egg hidden in “War Mage.” If you know how to read Morse code, that is. “The first pass that Matt [Clayton], who plays synth, did for a rough recording had a part in a very quiet lonely spot that I noted sounded like Morse cod,e and I said it made me feel like a survivor’s capsule drifting into deep space, sending out a distress signal that may never be picked up. And then Matt actually wrote a Morse code part for it that we put in the song.”