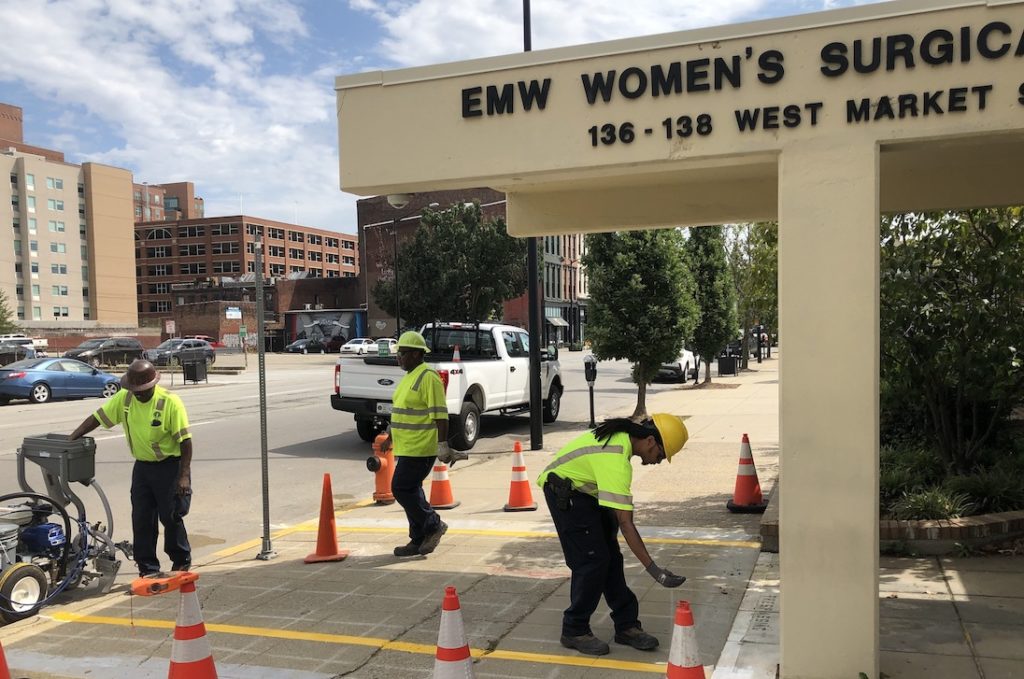 A city crew reinstalls the buffer zone lines after initially painting them too wide. | Photo by Scott Recker

The Louisville Metro Police Department responded to complaints of protesters in the buffer zone at the EMW Women’s Surgical Center on Saturday, but it did not issue any warnings, according to the department.

This was an improvement from the Saturday before, when police did not respond to calls at all about anti-abortion protesters ignoring the new, 10 foot buffer zone in front of EMW. The department said in a statement the next day that it had more urgent priorities.

This past Friday, Sept. 24, LMPD issued another statement saying it would enforce the buffer zone, handing out written warnings to those who its officers personally witness violating the city law.

The next day, the police responded to two complaints about protesters flouting the ordinance that created the buffer zone. One was a Metro311 complaint, said LMPD spokesperson Dwight Mitchell.

“Just like we would at protests, if you were out there blocking the street and then you moved, nothing happened,” said Mitchell.

A photo on social media shows several people standing well within the buffer zone on Saturday before police arrived.

In a statement, Louisville council member Cassie Chambers Armstrong, who sponsored the ordinance creating the buffer zone, said, “the safety zone only has power if it is enforced. I’m glad to see LMPD taking steps to make this a priority.”

The police department said that if a protester violates the buffer zone after receiving a written warning, they may receive a formal citation. If the officer does not witness the subsequent violation, they can make a report. “The complainant may then go to warrant intake where a determination will be made as to whether a criminal complaint can be filed against the violator(s),” wrote LMPD in a statement.

The citation will result in a fine ranging from $150 to $500 if the perpetrator is convicted.

LMPD also has the ability to track written warnings within its system.

On Saturday, the same account that tweeted the photo of protesters in the buffer zone, @LouClinicEscort said, “Gotta say, the safety zone is really helping clients who get dropped off.”