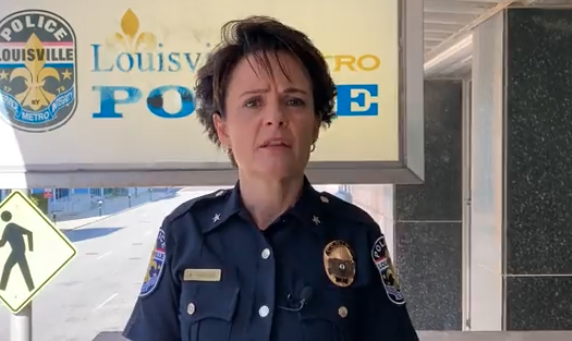 Louisville Police Chief Erika Shields still thinks a JCPS police department is a good idea, despite criticism from the community.

In a video posted to social media yesterday, Shields doubled down on comments she made during a press conference after the bus stop shooting death of Eastern High School student Tyree Smith, saying that police officers are needed in Jefferson County Public Schools.

Her remarks provoked backlash from community members who say that police in educational institutions would endanger Black students and not make the city any safer. School Board member Chris Kolb called Shields’ push “shameful and reprehensible.” Many also pointed out that the shooting at the bus stop occurred at a place where a school resource officer wouldn’t be present.

But, Shields said that SROs are necessary in her video.

“The violence that we’re seeing being committed in the communities does not end when the child gets on the bus and goes off to school for the day. It goes into the schools,” she said. “And the problem is, by not having trained law enforcement there, we are not getting any of the information that we need to know what’s going to come back into our communities.”

Shields added that LMPD has “no desire” to be in schools.

“That is not our role,” she said. “There are many successful school resource officer programs across the country, and I would hope that between the teachers, the students and the parents of students, we could all come to an agreement on what would best help us make this city safe.”

In a repeat of the week before, activists derided her comments.

“Chief Shields can’t fill openings in her own department,” said Louisville Urban League President Sadiqa Reynolds on Twitter. “@LMPD is the Louisville police force and our unsolved rate is through the roof. Her comment was ridiculous but forgivable last week when emotions were high. This double down is unfortunate.”

“Shameful,” said activist Hannah Drake. “A 16 year old boy was murdered at a bus stop in Louisville. Erika believes because of this the school district needs their own police department. I am appalled Erika would use this moment of tragedy, when a family & community is grieving to push this agenda. Shameful.”

JCPS does not currently have school resource officers. Prior to the pandemic, LMPD pulled its officers from the schools amid budget cuts, and the school board voted to cut its remaining contracts with police. The school board and administration started negotiating a plan to create an in-house security team, but this effort stalled during the pandemic. Kentucky state law already requires armed school resource officers to be in schools, but the government never allocated money to see any programs through.

A change.org petition created by a JCPS teacher calls for more counselors, not police officers. So far, it has 186 signatures.