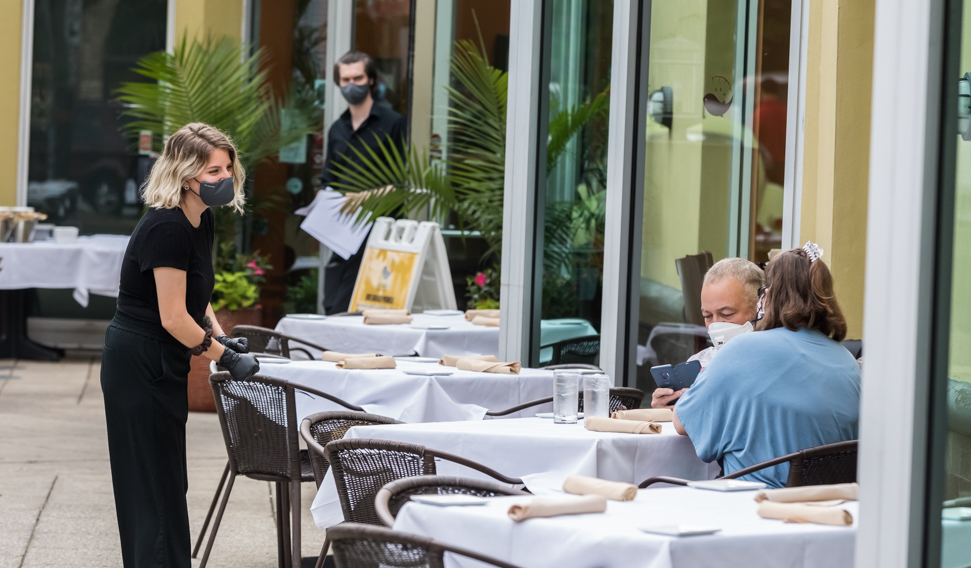 Seviche when it first opened back up to in-person dining during the pandemic. | Photo by Kathryn Harrington

When I got my COVID vaccination a few months ago, I thought this long nightmare was over. Ha! The nasty Delta variant has brought the virus roaring back.

Kentucky COVID numbers have hit all-time highs, with the state reporting 30,680 cases from Aug. 30 through Sept. 5.

“Please, at least take the same precautions you did earlier in COVID,” Beshear also said recently.

But let’s face it: It doesn’t look as if that’s going to happen. The numbers may look as bad as they did in 2020, but we aren’t all huddled in our houses, again, living on takeout and delivery. Why not?

First, justified or not, there’s a little less fear. And there’s the vaccine.

Stacy Adams Roof, CEO of the Kentucky Restaurant Association, said she has heard spotty reports about decreased restaurant business, but very few. “I think operators have generally seen an uptick in carryout business again. Several local finer-dining establishments in Louisville have told me the past few months have been record-setting for them, even over 2019,” she said. “It’s a mixed bag.”

“Mixed bag” sounds right to Richard Blaine Doering and his wife Marcy, who own Legacy Pizza and Bakery in New Albany. “We have definitely seen the behavior of dine-in change, especially since school started,” Marcy Doering said. “But I think there’s more to it than the Delta variant. The heat has been keeping people from going out until later in the day. Lunch always drops off when school starts for obvious reasons. I have honestly only had a small handful of customers ask about distancing, masks, the recent uptick in cases, etc. over the past month.”

Legacy does whatever possible to accommodate concerned customers, Marcy Doering said. More people are wearing masks again, even for curbside pickup. Tables are still at six-food spacing, staff wear masks and curbside is still their main mode of business.

At Seviche on Bardstown Road, chef-owner Anthony Lamas said he gets more cancelations when it rains, apparently because many people are only willing to dine outside. Most of the staff wear masks and have been vaccinated, he said, “but we don’t force it.”

Nearby on Bardstown Road, Eric Morris opened his Faces Bar/Bistro in June 2020 when the pandemic was already under way.

“To be very blunt, we have seen a drastic downturn in business since the rise of Delta,” he said. “Once everyone was starting to get vaccinated and the restrictions were eased, we were doing more business than we ever have… and what a brief holiday that was. It was around three weeks of a steady incline in business, and then it went straight back down.

“With margins being paper thin as is, I’m going to probably move to counter service only and make the unfortunate decision to cut some hours and work more than I already do,” Morris said. “We survived the first wave with both local and federal grants, but I don’t see that happening again. Going to have to get very creative!”

Creativity may involve better delivery options and take-out incentives such as discounts. “It’s basically a whole new pivot to an already existing crisis that has become so political that people disregard the health and well-being of their own human peers,” Morris said. “Blows my mind.” Me too, Eric. Me, too

Joe C. Phillips, owner of Pints & Union in New Albany, said their staff masks up, and the restaurant continues to require social distancing and other safety measures. They don’t stay open late, and they don’t pack the place. “But there’s no simple solution,” Phillips said. “We can’t force people to go get the shot.”

At V-Grits, owner-chef Kristina J. Addington said that June and July were busier than ever this year. August dipped a little, as it usually does when families get into back-to-school routines. Now they’re on edge to see if September brings the usual increase in business or if understandable customer hesitance slows things down. She hopes V-Grits’ impressive rooftop patio will continue as an attractive option while weather permits.

Employees are masking up again at Anoosh Shariat’s twin eateries Anoosh Bistro and Noosh Nosh, his wife and co-owner Paula Barmore said. “We have seen an increase in carry out and curbside at both restaurants and changed our point-of-sale system at Noosh Nosh to a better online ordering system.”

Kevin Grangier said his three Belle Noble Restaurants — Grassa Gramma, Le Moo and The Village Anchor — have seen no reduction in guests so far, enjoying a “summer rebound” thanks perhaps to outdoor dining; but he does anticipate a turndown “so long as the unknown remains unknown.”

Throughout the pandemic, Grangier said, he has tried to err on the side of caution, keeping the worst-case scenario in mind. While the three restaurants no longer require customer temperature-taking or require diners to mask, they continue focusing on distancing and cleaning protocols, as well as required vaccination, masking and daily temperature checks for employees.

His restaurants continue to encourage online ordering, carryout and catering, he said, “all of which have become revenue streams for the restaurants; we will move forward with those as we have been.”

Finally, Grangier said, “I have indicated to my team to equate our current situation to a second marriage:  We learned from the first one; we will continue to learn from the second one; and we will do whatever required for as long as is possible to avoid a third one.”